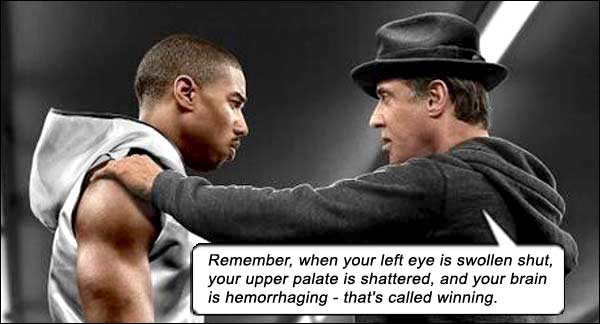 When Apollo Creed’s son, Adonis, seeks out Rocky Balboa to train him in CREED, there’s only one thing Rocky can do – become Mickey. Sylvester Stallone takes on the role that made Burgess Meredith famous – cantankerous old fart who trains a contender.

It’s a strange animal, this CREED, about a young guy with natural talent and reckless instincts, a reluctant trainer, a tentative love story, a training montage, insurmountable foe; the boy shows heart, becomes Philadelphia’s favorite son… Isn’t that the 1976 movie called ROCKY? Copy and Paste. Change Rocky character to “Son of Rocky’s greatest Opponent.” Funding! Can we separate the nostalgia, the legacy, the legend, that informs the fabric of this new fiction? Even though that fabric is merely a mirror image of Italian Stallion? We must ask ourselves:

In NOWHERE BOY (2009), if the troubled teen wasn’t John Lennon, would it be Just Another Band Movie? If it wasn’t for the presence of Rocky Balboa himself, or tying in Apollo’s blood – would CREED be Just Another Boxing Movie?

Answer: probably. But that’s this movie’s hook, innit? That was its greenlight; its lifeline to box office. The only viable way to squeeze more cinema dollars from the character of Rocky Balboa as played by Sylvester Stallone was to take him down this road. That, or having him abducted by aliens, rejuvenated in their youth chamber, coming out as Tom Hardy, then taking on a space-boxer threatening the galaxy. ROCKY VII: ROCKY VS. PREDATOR. Believe me, after the dunderhead studio execs I’ve encountered, I wouldn’t be surprised if that script was floated at a Warner Bros. meeting and seriously considered while they were waiting for a confirmation callback from Sylvester Stallone.

Adonis Creed (Michael B. Jordan, rhomboids thrumming) chalks up boxing bona fides in underground Tijuana matches. He drops his mythic epithet, shortening it to Don, and takes his mother’s (Phylicia Rashad) maiden name, Johnson, because he doesn’t want to trade on his father’s legacy– wait!– Don Johnson? (I guess they don’t get MIAMI VICE down in TJ.) He forsakes his job, his mother, his easy lifestyle, to move from Los Angeles to Philadelphia, pursuing his dream – professional boxing. You would not be alone if you were perplexed by CREED’s opening scenes…

First scene finds Mrs. Cosby picking up young brawler Donny from a correctional facility, where the warden sums up, “He’s a good kid. He just fights all the time.” I think this warden needs to look up the dictionary definition of “good kid.” In the context of this movie, it’s foreshadowing, but in real life, “fighting” is not a condition anyone should aspire to; it’s a pathological disorder. (That’s why only sociopaths become politicians.) Though the screenwriters give Donny a solid motivation – another kid insulted his mother – any psychologist will tell you there are other ways to resolve such conflicts. Even his mother is against his belligerent nature, and tells him so throughout his life, yet she is painted as a dreamkiller. Young Donny is, in essence, an idiot-child, quick with his fists and slow with his wits. Later, Rocky will mention he can tell the 20-something Don is educated by the way he talks, the screenwriters thereby mitigating Don’s hebetude by giving him an imaginary education; imaginary because Don shows no signs of education in any other way, unless they expect us to consider working in a cubicle and wearing a tie a sign of “education.” Rather, Don comes off as an entitled snotnose, gambling away his Mustang on an impetuous boxing match, then quitting his cubicle job after getting a promotion. When he rolls into his mother’s gigantic mansion, we see why everything is easy-come-easy-go with this spoiled brat – he’s stinking rich, so there’s no desperation, no liability in losing money, a Mustang or a day job. There’s nothing that gives us a good feeling about this guy – except for the fact they’ve cast the magnificent Michael B. Jordan (FRUITVALE STATION), who brings a commanding presence and strength of will that his character here should not even possess.

On a giant flatscreen, Don shadow boxes to videos of his father (Carl Weathers as Apollo Creed) against Rocky Balboa.

When Don moves to Philly and visits Adrian’s Italian restaurant to reveal himself to its owner, the legendary Rocky Balboa, and ask for his help, they talk in front of an old action pic of Rocky and Apollo locked in battle. A meta-circular moment frozen in time: the past, the future, the franchise, the fired executives (who thought ROCKY VS. PREDATOR was a good idea)… Rocky is hesitant to take Apollo’s son under his wing, firstly, because there are worlds at stake when the names Balboa and Creed are involved, and secondly, because he just “don’t do dat no more.” He’s old. He’s done.

It’s slightly disorienting wrapping our heads around Sly playing an “old man.” This guy who we just saw as fit as a bridge cable in THE EXPENDABLES 3 (2014) is now pretending he can’t hold gloves or spar – his team has to shepherd Don through the rigors of training, while he drawls advice from the sidelines. (And when we see him trying to take the iconic Philadelphia Art Museum steps – camera tracking him from that same profile position – panting and holding Creed for support, it is heart-breaking. Fuck old age!) Admittedly, it’s a testament to his grand performance, because we know the nearly 70-year-old Stallone can probably knock out the 28-year-old Jordan if he wanted to.

Sad to see Rocky visit Adrian’s and Paulie’s graves. Where he realizes he’s got nothing better to do – except train the Creed boy…

1976’s ROCKY might not have been the first to use its many clichés and tropes, but – like DIRTY HARRY, LETHAL WEAPON and DIE HARD – it popularized them to the extent that, though CREED is a well-produced, brilliantly-acted and creatively-directed movie, it’s hard to get too pumped over something we’ve literally seen so many times over 40 years. 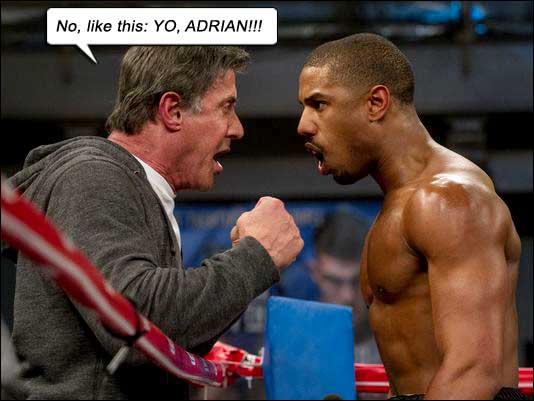 Don’s identity is kept secret, as he and Rocky move up in the boxing world slowly but winningly. Don’s first proper match is nothing special boxing-wise, but from a directorial standpoint, a triumph! In an unbroken take, director/co-writer Ryan Coogler (FRUITVALE STATION) moves amongst the boxers, in a sweat-drenched sweep that takes in the whole scope of the match (as we see the audience in 360-degrees of background) and its gritty interior (on the shoulders of the fighters themselves); a marvel of planning, blocking, fight choreography, set dressing, CGI, acting… not just one round – the whole match – following the fighters into their corners then back into the fray again. It’s one of the best filmed boxing bouts not just in a ROCKY film, but in any film. Besides Don’s opponent looking suitably savage – real life International Light Middleweight Champion Gabriel Rosado (fully-tatted, with a brow that tells us he hasn’t evolved past the Pithecanthropus subspecies) – this is not the bombastic Hollywood fighting of ROCKY III or IV, but a controlled, tactical, “real” boxing match.

Don finds his “Adrian” in Bianca (Tessa Thompson, SELMA), his musician neighbor who reminds us of Lisa Bonet in HIGH FIDELITY, except her New Wave music really sucks.

Don’s identity is outed by another trainer, and the stakes are ramped into the stratosphere as the world champion “Pretty” Ricky Conlan (Tony Bellew, also a real life boxer and three-time ABA Heavyweight Champion) now challenges the Son of Creed, under the tutelage of Philly’s favorite son! It is refreshing that Conlan is built like a real boxer (because he is), not a V-torso superhero (which Jordan actually fills out quite sensually – ladies!), although his thousand yard stare indicates his family tree also stalled at Pithecanthropus. (When put up against the fact that boxing is not a sport but a cathartic regression to base instincts, is it any wonder these real boxers are walking examples of missing links?)

Cue training montage. But – noticeably – no Gonna Fly Now. Ludwig Göransson composes themes for a new generation, cut from whole cloth, and within the context of Don becoming Adonis, finding his roaring heart amongst the street bikers revving around him cheering him on, I’d say these motifs are just as driving, just as inspiring for this new generation as Gonna Fly Now was for the old. Göransson constantly teases us with snatches of motifs from ROCKY canon, but never lets us sup at the fountain. You can guess where we eventually hear Bill Conti’s uplifting horn theme – yes, in the last bloodmageddon where Our Hero gets an infusion of spirit (or “spiwit,” as Pontius Pilate might say; a touch of “dewwing do”).

Rocky gets cancer. But don’t worry – it’s nothing serious – it is simply to emulate the beats of the original ROCKY trilogy, where Mickey gets laid up and gives Rocky pause. Y’know, if this storyline was going to be so unoriginal, maybe ROCKY VS. PREDATOR wasn’t such a bad idea… Rocky’s cancer almost becomes a grand statement on Right To Die issues (“My wife tried chemo – didn’t work out – I’ll pass…”), but ends up being just an excuse to give Rocky an adversary. (In ROCKY, he was fighting against being an underdog; in II, against Apollo; III, Clubber Lang; IV, Russia; V, against brain damage; VI, old age.) As in the original trilogy, the fighter – Adonis – is despondent, but perks up, because he realizes the third act is near and everything’s gonna be okay. He tells Rocky, “If you fight [the cancer], I’ll fight!” Therefore negating any “right to death” issues – oh, so it’s all about the inspirational training montage continuing at the hospital, in humorous scenes that inspire us to do pushups in an ICU and shadow box while people are dying on intravenous drips around us. We coulda guessed a tentpole movie would never be brave enough to let Sylvester Stallone make a stand about dying honorably instead of withering away as an irradiated lump.

So the cancer is NEVER MENTIONED AGAIN. But why give someone cancer unless he’s going to drop at a crucial dramatic point, like Mickey did in ROCKY III? But this doesn’t happen in CREED, because the Rocky character is so much more renowned than the character of Mickey, and dropping Rocky would have removed focus from Adonis. So besides Rocky losing his hair and looking haggard, the cancer creates no further adversity, because that’s how cool Movie Life is. And we never get told whether it is in remission, or more treatment needed, nothing. The device outlived its usefulness by the third act, by which time Adonis Creed has become Rocky, fighting as the underdog – to his own father’s name, “probably the greatest fighter in history.” Thanks, Screenwriting Classes, for pulling us through the Act II hump.

Michael B. Jordan is the perfect vessel for carrying the Rocky/Creed legacy into the future: fiery personality, slick boxing style, excellent actor, a natural born killer. Now we wait for the sequels, where Adonis will battle a mohawked Mexican gangbanger (in place of a mohawked black guy – because in movies, Mexican gangbangers are scarier; those gangbangers from Compton are all in Whitey’s financial back pocket now), an ISIS terrorist (in place of Mother Russia), and – his most terrifying, ugliest, irrational, ignorant foe of all – a Republican, who hates that a black man is filling a role traditionally filled by a white man.

This is how they’re gonna reboot everything under our noses. They learned from the ill-fated PSYCHO remake: don’t put the same “type” in the role. Now Rocky is black. Now Thor is a woman. Darth Vader is Kylo Ren, John McClane is a pygmy from Botswana. And Dirty Harry is a non-racist Puerto Rican gay guy.

But if you want “original” you’ll just have to wait for Tom Hardy as Rocky Balboa in ROCKY VS. PREDATOR.