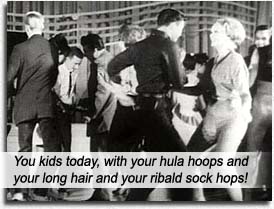 Not having been born when THE CREEPING TERROR was first released, I can only assume that it died the burbling, cinematic death it wholly deserved, released alongside the likes of DR. STRANGELOVE, GOLDFINGER and even such pap as A HARD DAYS’ NIGHT. Fact is, this movie would have remained in its Z-Movie graveyard were it not for the notoriety it achieved via its skewering on MST 3K.

A large offcut of shag carpet draped over a few drunk college students is supposedly a monster from space, waddling about the countryside eating people, victims courteously lining up to step horrifyingly apathetically into its maw (a rug doggy-door on its anterior surface). Oh, the blandly unmitigated terror. Oh.

Auteur director Arthur Nelson (who boldly went on to never make another movie), apparently lost the soundtrack, substituting narration and abominable looping over the “action,” elevating the movie to the level of excruciating infomercial.