here did this notion spring from that “crime doesn’t pay”?

Firstly, what that forcefully ignorant axiom refers to is “lower class crime” like robbing a 7-11 or snatching a purse, you know, things that SUPERMAN likes to thwart. That axiom completely ignores the fact that 95% of “upper class crime” (referred to as “white collar crime” – which drives me insane with its snide euphemism) goes unpunished, unknown for the most part, while those avaricious swine perpetrating it are, in fact, making that profession pay. To whit: Dick Cheney. 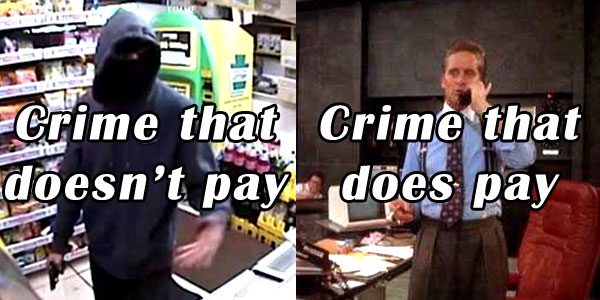 As with every profession, 99% cannot make theirs “pay.” While 1% can. In EVERY profession, including Wall Street. And to be in the 1% (i.e. a success in your profession), you need to close your mind to the ethics on how that money is made and the blood-soaked reality of where it comes from, i.e. you need to be a sociopath. To whit: Mitt Romney.

Look at the health care system in America – crime. Pays. Look at the pharmacies and banks and investment cartels – crime. Pays. Look at your elected officials doing only what is necessary to retain their jobs and pad their bank accounts – crime. Pays. Look at the real men in power behind the politicians who have had to close their minds to how they made their money – crime. Pays. You cannot think of one profession in high office that is not associated with crime, legal or ethical. We all “know” this at such a visceral level that we can accept it without question or revolution in our entertainment media: In HOUSE OF CARDS, a foreign government official remarks, “Everyone who works on this level pays who they need to pay, and they kill who they need to kill.” And the lead character, the Vice President, tells us offhandedly, “The road to power is paved with hypocrisy and casualties.” Congresspeople voting down education, health care, infrastructure… All these things are crimes. They’re not “crimes” that we are used to seeing represented as crimes – robbing a 7-11 or snatching a purse – these are crimes against humanity itself. All paying jobs.

The road to power is paved with hypocrisy and casualties.
— Francis Underwood (Kevin Spacey), HOUSE OF CARDS.

Take a fictional example we all know: Walter White (BREAKING BAD) – who closed his mind to the atrocities he was committing in order to make his crime pay. In closing his mind, he found his balls. We forgive Walter White for the same reason we forgive the sociopaths who walk among us – we don’t see their private lives serialized for our entertainment, but don’t doubt that their storied adventures are just as corrupt as the anti-hero Walter White’s: Bill Gates, George W. Bush, Warren Buffet, Sheldon Adelson, Barack Obama, Chuck Grassley, Bono, The Sultan of Brunei, Arlen Specter, Mark Zuckerberg, the Queen of England… You’re thinking, “Whoa there, Dunmore! You’re swinging left, right, all over the map!” Yes, liking or detesting the above personalities has nothing to do with the fact that they have had to close their minds to unspeakable atrocities to attain and retain their positions and purvey a semblance of normalcy to the outside world.

You’re still not “getting it.” Look at it this way, if you had 10 billion dollars and people are still starving on the streets, shouldn’t you GIVE AWAY at least 9 billion of those dollars to help those starving if you possessed even a shred of decency? Nothing to do with socialism, communism, capitalism, et al – just common fucking decency. Any human on Earth can live quite comfortably on one million dollars, yet these men and hundreds of thousands like them have much, much more. Yes, they’ve worked hard to amass their fortunes and attain their positions – but what did they have to do to get there? Close their minds off to humanity. Does anyone really need more than a million to truly live a full life? In other words, those men are closing off their minds to the atrocities around them and perpetually convincing themselves that they need their millions and billions and fame and freebies. Look at the size of the BALLS on these in-denial sociopaths! 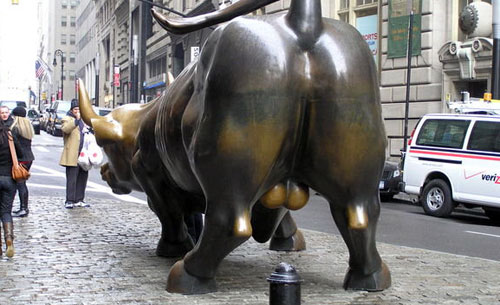 Is it any wonder this Wall Street statue has BALLS this prominent?
These criminals just loooove showing off.