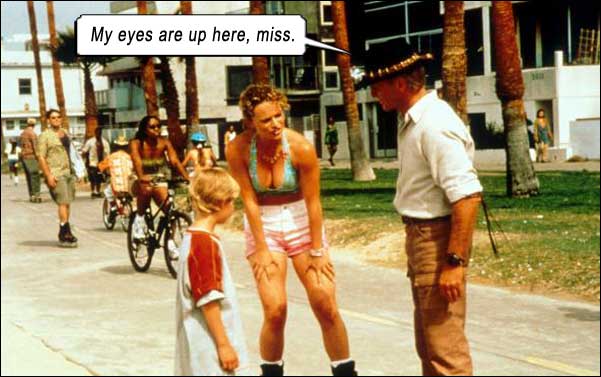 After cringing through every minute of CROCODILE DUNDEE IN LOS ANGELES, I’d like to, uh, not be Australian any more, please.

After Steve Irwin redefined the term Crocodile Hunter to mean conservationist and all-round noyce goy, Paul Hogan’s seedy crocodile poacher character became irrelevant. Yet CROCODILE DUNDEE IN LOS ANGELES drags its feet to the billabong once more – and finds it dry as the Australian Outback.

When Mick’s tribal Aboriginal friend (half-naked, face-painted and carrying a spear) pulls out a cell phone, we realize technology has infiltrated even the far reaches of Mick’s stomping grounds, Walkabout Creek, yet Mick is still untouched by civilization’s forward momentum.

So when Sue has to move to Los Angeles to uncover a smuggling ring, the filmmakers (writers Matthew Berry and Eric Abrams and director Simon Wincer) see their chance to throw another ocker shrimp on the lowbrow barbie.

The first CROCODILE DUNDEE was a classic reworking of the fish-out-of-water tale; a blend of action, romance, pathos, humor and Aussie masculinity. DUNDEE IN LOS ANGELES serves one purpose only – to make Aussies look like a right pack of galahs.

Aussie Alec Wilson (who played an enemy of Dundee’s in CROCODILE DUNDEE II) now plays Jacko, a mate of Dundee’s from Oz, who is the Cousin Oliver of this movie – brought in to be even more provincial than Dundee because, we presume, Dundee is apparently looking as bloated as Cindy Brady.

Paul Rodriguez cameos and tries to act funny. Someone forgot to tell him he’s not.

Plot tries desperately to be interesting but only succeeds in jumping the shark time and again as Dundee goes undercover as a movie extra, uncovers a smuggling ring and tames lions.

Not so much a fish-out-of-water tale as a crocodile out of water, out of steam, out of touch and out of ideas.