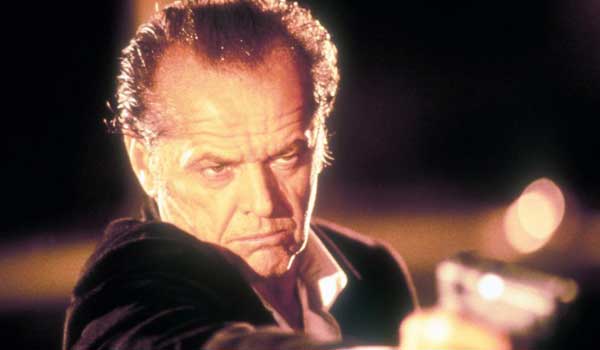 Redemption: always in the last place you look.

What a brilliant little gem of a movie! An emotional wallop to the weeping nerve.

And no wonder – written and directed by Sean Penn, the King Of Weeping (and I say that in all respect to his talent of doing it on cue), who shows a directorial hand in THE CROSSING GUARD as controlled and powerful as Eastwood’s, who would direct him years later in MYSTIC RIVER.

John Booth (David Morse) is released from prison. Freddy Gale (Jack Nicholson) licks his chops; vows to his wife Mary (Angelica Huston) he’s going to kill this killer of his daughter – Booth ran her down accidentally on a school crossing; his jail time was for that manslaughter. Freddy meets with Booth, gives him three days to get out of town before Freddy would come after him…

It all seems like a nice setup for a popcorn B-Movie chase actioner. Which Penn righteously ignores, thank Christ!

These characters are not Hollywood-ised in the least, even though the action takes place on those familiar streets. These are conflicted men, who deal with emotional aftershocks like swaying pendulums:

David Morse gives the performance of a lifetime as Booth, all raspy voice, muttonchop sideburns and jail mullet; guilt-ridden and welcoming Death’s imminent embrace one minute, then filled with fake bravado the next, black sunglasses on at night, taunting the air, “Come on!” and willing Freddy to burst through his trailer door to cease the suspense. Jack makes his dead eyes deader as Freddy, a jeweler by trade, now a shell, sublimating his ferocious weeping anger in hookers and booze, trying to alternately kill himself and make plans to kill Booth.

Robin Wright Penn is the very picture of empathy, as a woman whose embrace Booth falls into, but who “can’t compete with his guilt.” Booth tells her of the accident, of how he knelt by Freddy’s daughter after running her down and she was mouthing something – apologizing for not looking both ways. 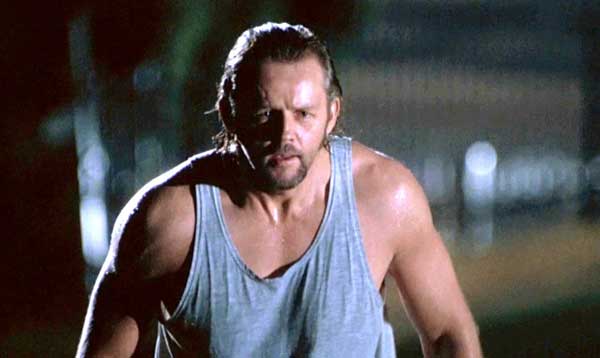 THE CROSSING GUARD makes the ground shift under our feet emotionally. We don’t know whether to sympathize with a father’s righteous anger or a manslaughterer’s purgatorial guilt.

It moves us in strange ways: there is a blackly humorous scene where Freddy is dining a Mexican hooker while a band performs Love Hurts – in Spanish; then the ground shifts as Freddy weeps inconsolably on the phone to his wife; then shifts again, as he meets with her in a restaurant, only to end up indignant that she would deign to feel sorry for him feeling sorry for himself, and telling her he “hopes she dies!”

Then shifts again: Freddy hides from the police in the room of a little girl, whom he implores not to reveal him; she doesn’t, the police leave, and he kisses her tenderly, “Good night, sweetheart.”

Excellent scene where Freddy is pulled over by police, who actually act like police, rather than Movie Police.

When Freddy gets to Booth, Booth gets the drop on him – but both men are so conflicted that now it is Freddy’s turn to welcome death, confessing that he’s on the run from police, he’s trespassing, he’s got a gun and he was drunk driving. If Booth shot him now, he would walk away clean; Freddy almost begs Booth to put him out of his misery, in a masculine displacement gesture: “I guess I’m gonna try and shoot you.”

As Booth and Freddy aim at each other, it’s like a John Woo moment – without the stupidity.

But Booth has something deeper in store. He drops his rifle and takes off, with Freddy giving chase half-heartedly. With a gun in his hand, Freddy could easily shoot him down, yet allows himself to be led, with Booth just out of range – until the KIDS IN THE HALL moment, where they both board a bus and Booth pays for Freddie and they sit at opposite ends, waiting to resume the chase on foot.

Where Booth is leading Freddy is this movie’s beating heart. It is so poignant and surprising that the King of Weeping has got me doing it as soon as the chase starts, because I know where it leads.

We realize only in the last frames that Freddy has never visited his daughter’s grave.