If you strike me down, I shall become more powerful than you could possibly imagine.
–Obi-Wan to Darth Vader in STAR WARS.

Another man of peace killed by men of ignorance.

CRY FREEDOM stars Denzel Washington as Steve Biko, the black South African anti-apartheid insurrectionist of the 1960s and 70s (a contemporary of Mandela’s, imprisoned on Robben Island during Biko’s time), who advocated against blacks being treated as second-class citizens – killed, as usual, by white men with small-penis insecurities. 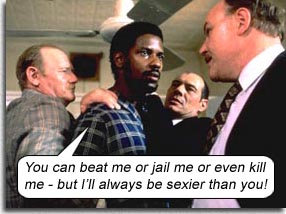 But – like Obi-Wan before him – his murder achieved exactly the opposite effect that the ignorant men desired. His death was another nail in apartheid’s coffin. Amandla!

Kevin Kline is Donald Woods, a white South African reporter who misunderstands Biko (as all whites did) as a black supremacist inciting riots. Woods is challenged by a Biko supporter, “If you are the journalist you say you are, you will visit him!” Woods does! And falls under Biko’s spell, discerning the nuance in Biko’s message of equality in his own stolen land.

But how does one NOT fall prey to the charms of Bantu Denzel? Magnetic, sexual panther, with a locution like butter dripping from warm croissants… CRY FREEDOM is truly where Denzel honed his silver-tongued smoothness for his role as that other black insurrectionist who cried freedom, MALCOLM X (1992).

The apartheid regime deemed Biko a “banned person” from February 1973, which meant he was not allowed to speak to more than one person at a time, publish his writings or speak in public. All of which he continued to do, with the aid of his network of underground supporters.

Biko brings Woods into his inner circle and Woods truly begins to see through others’ eyes, eventually becoming such close friends with Biko that he would risk his life to bring Biko’s message to the world.

CRY FREEDOM is two very good movies cobbled together at the expense of one great movie. From Donald Woods’s 1978 book Biko, screenplayed by Jack Briley, director Richard Attenborough’s cry of freedom becomes diluted in its second half to a cry of chase-movie.

Filmed in Zimbabwe, the first half of the movie is rife with suspense and frustration as Biko is sought by the white authorities, and his family and community terrorized by no less than the Minister of Police, Kruger (John Thaw); it is also showcase for Biko’s philosophies. And – not least – Denzel! Dominating with his “black is beautiful” renaissance.

Nice to hear Biko’s speeches thrum with honesty, rather than stale rehash from Movie Speech handbooks: “…As angry as we have every right to be, we are here to kill the idea that one kind of man is superior to another kind of man. And killing that idea is not dependent on the white man. We must stop looking to him to give us something. We have to fill the black community with our own pride….”

Equal rights in his own country – too much to ask? The white regime thought so. Oppressors are always threatened by the conquered rising above their oppressed state in any way, even psychologically.

Biko did not advocate violence – he was the black Gandhi (but wasn’t Gandhi the black Gandhi? Uh, let’s move on…) – but unlike the frail little Indian, he had no qualms in fighting back against it. When a cowardly detective strikes Biko while two police hold him, as soon as they think he has cowed and release their hold on him, Biko hauls off a backhand that sends the detective sprawling. Reminds us of Poitier IN THE HEAT OF THE NIGHT – unthinkable for black to strike white, even in self defense. “…conflict if he likes…” To top it off, that measured voice, reminding them in buttery croissant, “I just expect to be treated like you expect to be treated.” How very Christian of him – Old and New Testaments!

August 1977, Biko is arrested as he tries to make his way through roadblocks to deliver a speech in Capetown. This is the jarring transitional stage of CRY FREEDOM, as we next see Biko naked and comatose on a cell floor after police have tortured him to the point that an independent doctor is examining Biko and advising them to get him medical attention NOW. Which they don’t, opting to throw Biko in the back of a Land Rover to transport him to a hospital 700 miles away in Pretoria. Steve Biko dies on September 12, 1977 in custody. The police lie it was a hunger strike.

So it was then, so shall it always be.
The closing title card: “By Act of Parliament in 1962, the South African government legalized imprisonment without trial. Since that time the following are the official explanations for all known deaths in detention.” The credit roll lists all the detainees, dates of their deaths and the reasons given, which include: “suicide by hanging,” “fell seven floors,” “natural causes,” “slipped in shower,” “thrombosis,” “fell down stairs,” etc.

And through the Military Commissions Act of the 2000’s, the American government did the same at Guantanamo Bay (among other black sites), issuing “official explanations” for the deaths of detainees, such as “natural causes,” “suicide,” “cancer,” “apparent natural causes”… Which proves you don’t have to lead an apartheid regime to be an ignorant, murderous bigot.

Donald Woods’s escape from South Africa is an amazing story itself. Authoring a book about Biko’s life, Woods must get the manuscript across the border for publication, to reveal sordid truths and spark change. By then, Woods was a “banned person” himself, so the book’s very existence was cause for imprisonment. His clandestine writings and physical struggles seem almost comical in this age of pdfs and e-mail, in this technociety where our pathetic little rantings are published on a world wide web with the effort of a few pushed buttons – and here is Woods neck deep in a river, a single copy of a paper manuscript held desperately above his head in a satchel…

We are suddenly introduced to the complete Woods family (Penelope Wilton as wife Wendy, and five kids, including stunning, shapely Kate Hardie as daughter Jane, who would unfortunately grow up to be boxy Bella in CROUPIER). Interspersed with the Woods family’s flight, Attenborough throws in flashbacks of Biko, to remind us why we’re here and (probably) still interested in a middle-aged woman and five brats. Strangely, those Biko flashbacks now seem to intrude on this suspenseful escape movie. Attenborough can’t win!

While it may seem on the surface like the movie has derailed, CRY FREEDOM is about Biko’s message – and Woods, through the direst adversity, is continuing Biko’s message, taking his cry of freedom to the world. It had to be shown that this life-risking trek is what Biko’s message is worth. And the continuing solidarity of Biko’s underground supporters who help Woods along the way is touching, and proves Obi-Wan correct, “A friend of Steve Biko’s is a friend of ours.” 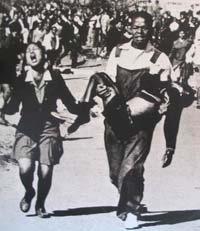 When Woods boards a small plane with his family safe at last, when we think the great journey has ended, Attenborough reminds us it has just begun, with a final flashback to June 1976, the Soweto Uprising, a euphemism for its original name, the Soweto Massacre.

All his life, Attenborough has had an iconic picture on his desk of a little boy named Hector Pieterson (1964-1976), one of the first children shot by police during a demonstration by students protesting being taught the white Afrikaans language in schools. The picture is to remind Attenborough of the injustices of the world – and in the last few minutes of the movie he recreates the scene (albeit a mirror image, as Hector’s head is facing the other way) – to remind us that 700 children were killed, 4000 wounded; to remind us why Biko had to fight; to remind us why Woods had to flee; why that manuscript had to make it out of South Africa; to remind us why CRY FREEDOM had to be made.

imdb
Word Count: 1,440      No. 700
Glossary
Bantu: is a designation for many varieties of African peoples. The whites in CRY FREEDOM use the word like a racist hammer, and might as well be saying “nigger” the way they spit it at Biko and other blacks.
Amandla: Xhosa, Zula word for power.