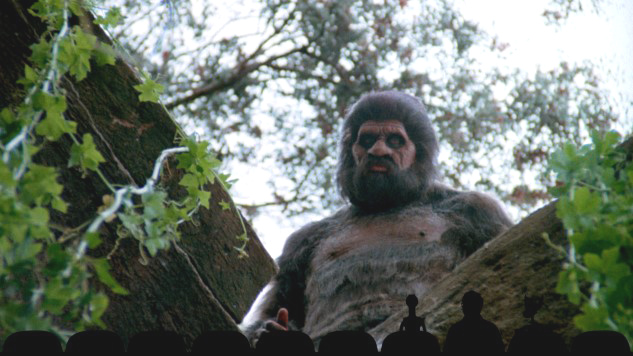 CRY WILDERNESS boasts the laziest Bigfoot costume in cinema history. Are they punking us? No, I think they’re serious. Irritating son, ranger father who looks more like a trucker, Native American who “spent too much time at college rather than in the wild,” and a muscled tracker wearing a mesh shirt to show off said muscles. A directionless romp through a forest tracking a tiger, while the tracker thinks to bag Bigfoot and make a fortune showing him off. Bigfoot looks on, then lifts some rocks and The End.

Bigfoot appears in a holy vision to young Paul, urging him to save his father in the wilderness. Wait – Bigfoot speaks English? And if he can speak English, does he really go by the name of Bigfoot?

Turns out Paul (schoolboy Eric Foster) hitches a ride to “the wilderness” for nothing, as he ultimately has nothing to do with saving his ranger father (Maurice Grandmaison) from danger. Bigfoot (Tom Folkes) does all the heavy lifting – literally – when a rockslide buries dad. Native American John Tallman tags along for offhanded racist insults, and Griffin Casey is the tracker who would rather be lifting.

Filmed on location in Californian parks, which seem suspiciously Canadian for some reason, a story coalesces when a tiger escapes from a zoo (that would be LA Zoo, I’m guessing, as that is one of the filming locations), and Ranger Dad, College Indian and Mesh Tracker go after it, with Mesh sensing there is bigger game afoot – with bigger feet. Paul keeps his tryst with Bigfoot a secret for as long as his seventies bowl haircut can hold out. It’s not much of a secret, as he blabs to his effete private school teacher (Navarre Perry) at every opportunity, who doesn’t believe him, until the very end, which makes for a magical ending that leaps to the far side of stupid. When Paul meets a mystical Indian who tells him Bigfoot is in danger (No shit, Sherlock!) and must flee to the mountains, the story starts making less sense than it was already not making. Wait – aren’t we already in the mountains? And what happened to the “Your dad is in danger” throughline?

It should tell us all we need to know that most of these actors have only one movie credit to their name – this 1987 masturb-piece. The only person with any mustering is writer Philip Yordan (HOUDINI 1953, THE MAN FROM LARAMIE, KING OF KINGS, FALL OF THE ROMAN EMPIRE, BATTLE OF THE BULGE). I speculate that first-time director Jay Schlossberg-Cohen thought he could do no wrong with such a veteran onboard. But writers have no control over directors’ ineptitude, actors’ cringeworthy performances and execrable looping.

And I can’t see the mighty Philip Yordan ever writing, “Bigfoot peers from the eyeholes of his cheap synthetic-fur suit, with a headpiece that looks like it’s just resting on the shoulders of the torso piece that looks like a Halloween costume of a furry jacket, and says…”