More powerful than a case of gout…

Youth is wasted on the Pitt.

For the longest time, I held off on watching this movie because I thought it would be as depressing as rain on a Monday morning. I was wrong. It’s worse; like seeing police lights in your rearview mirror, like finding your lover in bed with someone else, like watching an AMERICAN IDOL winner attempt a career in music… THE CURIOUS CASE OF BENJAMIN BUTTON is nauseatingly painful.

1918: At the end of WWI, a boy is born to Thomas Button (Jason Flemyng), the mother dying in labor. The baby Benjamin Button is somehow age-wrinkled and scares the pants off Thomas, who leaves Benjamin on the doorstep of a senior’s retirement home, where Queenie the caregiver (Taraji P. Henson) adopts him.

Benjamin grows (i.e. gets younger) until he is Brad Pitt, and Daisy becomes Cate Blanchett. Somewhere in the middle of her aging and his youthing, they move into an apartment together and do the nasty continually. 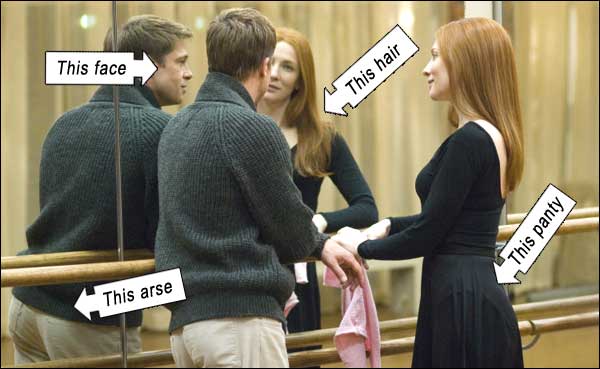 They even birth a child, normal in every way, until Benjamin (considering his bizarre fate) leaves Daisy without a word one morning.

Benjamin spends much of his screentime traveling the world and having non-sequitur adventures that have no bearing on the main theme of his horrifying brain malfunction. It’s like FORREST GUMP for opposite-aging freaks.

The filmmakers aim for relevancy by inserting “life messages” into Benjamin’s travels, but these messages of “power over one’s destiny” are unoriginal tropes.

The aging makeup is seamless and we never question the actors are doctored. The movie-making process is actually more transparent:

For the sake of the narrative to flow, characters talk to themselves, or do voiceover, with Daisy’s daughter (Julia Ormond) reading Benjamin’s diary for most of the movie, doing that annoying movie device of turning to pictures in the diary that reveal exact moments she is describing.

And that’s not even as contrived as the overwrought coincidence sequence in which Daisy breaks her leg and derails her dancing career – a woman missing a taxi, a man not setting his alarm, someone leaving one minute later than usual, blah blah – when she could’ve just as easily been hit by a truck, rather than Rod Serling’s TWILIGHT ZONE of coincidences.

In hospital, Benjamin visits Daisy, who hasn’t seen him in years. She exclaims, “My God, look at you! You’re perfect!” Well, he is Brad Pitt.

Jason Flemyng and Brad Pitt sit down to a beer, as same-aged father and son, reminiscing about SNATCH, that other movie they did together where no one could figure what was happening either. 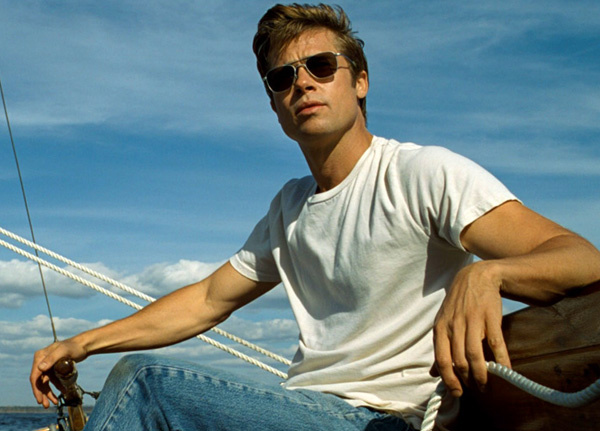 Brad Pitt: too sexy for Time.

Benjamin’s autumn years get distressing again, as elderly Daisy cares for him when he physically reverts to a tiny, pink, smooth baby – with his mind at the stage of old-age dementia. It is disturbing to watch these scenes of Daisy cradling a baby trying to mouth something (as babies do) but imagining it is Benjamin Button, losing the power of speech, even as he loses his powers of cognition.

Is this some metaphor for the fact that both extremes of age – very young and very old – are seemingly the same? That if you were to transplant the mind of an infant into the mind of a senile person, or vice versa, that outwardly they would exhibit the same mental deficiencies? That the brain’s capacity to hold information is like a bell curve – very young, it holds nothing, but information is going in; middle age, it is “full” and working at peak capacity; old age, information is filtering out, down to a point of nothing again with death…? It’s too disturbing to consider.

BENJAMIN BUTTON is geared for tragedy overload, but can we really feel pity for Benjamin Button? For a whole bump-ugly segment of his life, he got to be Brad Pitt. How many people can be that lucky?