Hell hath no fury like an Oedipal Complex scorned. 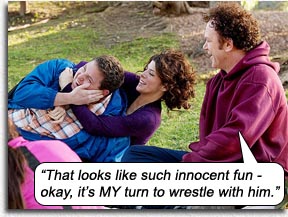 Don’t you hate it when the funniest parts are all in the trailers? ALL in the trailers. CYRUS is told in 1 minute and 30 seconds: Lonely John (John C. Reilly) meets fun chick Molly (Marisa Tomei) at a party; she is the only one brave enough to join him in a rendition of The Human League’s Don’t You Want Me. He begins dating her. She is something special. Then he meets her son, Cyrus (Jonah Hill); he’s a grown man, lives with her, and is crazy protective of mom; cue ominous conversation. Scary protective; cue shot of Cyrus in undies with a knife. Obsessive protective; cue rumble at wedding. And Molly is oblivious to the undercurrent of tension between her new lover and her old son.

Cue missed comedic opportunities. At least, I think CYRUS is a comedy. That’s what the 1-minute 30-second trailers say. More like a dark exploration of stunted personalities.

Writers-directors Jay Duplass and Mark Duplass can’t seem to retain a grip on what they’re trying to sell, even with such great comedians and actors at their call. Story skews towards disturbing pathos rather than absurd comedy. There are issues raised that are never addressed, such as John’s stalking of Molly after only their second night together; his invasiveness in turning up at her home uninvited, calling too often, being overtly needy. We could surmise that the Duplasses don’t get laid enough because they don’t realize their male lead is damaged goods, though they may be trying to make John a mirror image of Cyrus. But Cyrus has the luxury of being Molly’s son, so can get away with a little pathological clinginess; John’s clinginess, on the other hand, is portrayed as “true love.”

Catherine Keener (THE SOLOIST) appears yet again as a heartless bitch. And Tim Walsh (THE HANGOVER) once again appears as a placeholder.

Marisa Tomei is the shining lodestar here, singlehandedly holding the show together with her talent, because Reilly and Hill, excellent comedians though they are, are out of their league when it comes to the nuance of this dark comedy. They simply play two bemused antagonists, Hill opting to err on the side of blankness if he doubts what emotion should be on his face. It is amazing to see Tomei bridge the emotional gap between Reilly and Hill when all three are onscreen together, imbuing the scene with the correct emotions and reactions required to sell it.