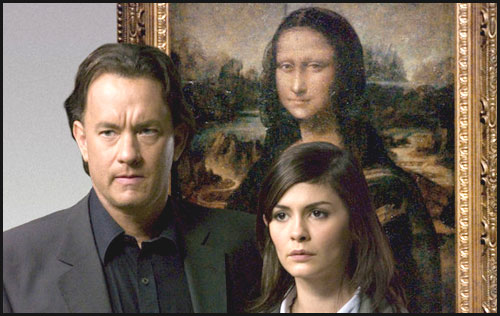 Leonardo, we have a problem… Tom Hanks is prettier than the women…

The Gospel According to Fluke.

Christians are a gutless lot.

Whenever a new fiction dares question their established fiction, they turn into the very backbiting, provincial bigots they accuse everyone else of being.

The “new” fiction is Dan Brown‘s novel, The Da Vinci Code. The “established” fiction is How to Murder with Impunity, otherwise known as Common Sense for Dummies, also called Prescribed Sex and Violence for Preschoolers, aka The Holy Bible (the word “holy,” as always, used in its most broad and ambiguous sense.) 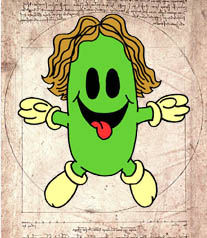 Through director Ron Howard and screenwriter Akiva Goldsman, Brown’s fable has been demoted to Over-Hyped Hollywood Movie, THE DA VINCI CODE, bringing out the backbiters in force, which says something about the condescending attitude religious leaders harbor towards their “sheep” (so judiciously termed), whom they do not trust to think for themselves.

In order to “save” their flock from – who knows what they’re afraid of (maybe “independent thought”)? – and proving once again that they have absolutely no faith (that’s the million dollar word, right?) in the supposedly omnipotent invisible guy they claim can do just about anything, religious leaders take it upon themselves to attempt stymieing this harmless, edge-of-boring media. Trickling this attitude down to the sheep themselves, we end up with protests and vigils and undue animosity towards free-thinkers, which of course, eventually escalates to murder and topless dancing.

I have not read the book. Apparently, it’s a page-turner. Or a well-marketed fad. But THE DA VINCI CODE movie – for all its touting of “shaking the foundations of Christianity” – is just not all that compelling.

Threatening to bog itself in esoteric jargon and weighted with faux-gravitas, this fable posits an interesting twist to that hoary tale of virgins and saviors and whores (oh my!), maintaining that Jesus took Magdalene as his wife and sired a bloodline that exists today. (I’m already feeling unholy.)

Symbologist Robert Langdon (Tom Hanks, sporting Vitruvian Man mane, and working from his Handbook on Furrowed Brows) and Detective Sophie Neveu (dull Audrey Tatou) find themselves embroiled in a murder frame-up which leads them on a Quest for The Holy Grail, no less (without the aid of Monty Python, who undertook The Quest 30 years ago on a smaller budget in a superior film).

Pursued by Detective Fache (Jean Reno), and by a self-flagellating, Opus Dei albino monk (Paul Bettany), who kills with the blessing of the church (which is what Christianity is all about), Langdon and Neveu seek asylum with the old man from Scene 24, Sir Leigh Teabing (Ian McKellen), a Grail expert, who exposits most of the “sacrilegious” aspects of this tale, invoking Leonardo Da Vinci, Sir Isaac Newton, The Knights Who Say Templar, the fictional Priory of Scion and the very real – though not self-flagellating – Opus Dei order (a kind of cult within the larger cult of the Christian church).

Trapped between the desire to deliver a “summer blockbuster” and to stay true to the cerebral nature of Brown’s text, Howard serves us a kind of COLUMBO episode on ‘ludes, where clues and riddles click into place like jigsaws. Though it delivers on the mystery and mental levels, the movie trips over in its execution.

Howard’s pacing is uncharacteristically sloppy, with an overlong third act that reveals the Grand Mystery anticlimactically and then pads itself to 145 minutes with further vapid revelations – but by then, it’s all about as relevant as the air-speed velocity of an unladen swallow.

There are also unnecessarily huge production numbers for the historical flashbacks showing knights covered in medieval poo, which involves Howard helming practically a whole second movie just for these vignettes, diluting the import of the spoken word and crucifying our imagination on glaring imagery, by showing us exactly what each speaker describes, like those insufferable 1980s rock videos which used to depict every line of the song lyrics with relevant visuals.

THE DA VINCI CODE is intriguing, yet far-fetched enough not to affect any person over the Age of Reason. Unfortunately, Christianity has no place for reason.

And what most scares religious leaders is not that this world-shaking fictional “secret” is provable – exactly the opposite! The secret – that Jesus spawned descendants – is itself based on “faith”! Who is going to test Jesus for his DNA? So how can anyone prove, either through documents, riddles, or by chopping down the mightiest tree in the forest with a herring, that they are of JC’s blood? The real life church is scared not because it believes its followers will intelligently discern that THE DA VINCI CODE is guff; it is scared because it knows its followers already have the propensity to believe inexplicable malarkey – they’ve been feeding it to those followers for the past 2000 years!

Lose enough followers to other religions/cults/Reason and your “church” is demoted to merely “cult” status (where it rightfully belongs), with no tax exemptions or impunity to fiddle with boys.

Langdon – with an eidetic memory (extraordinarily accurate recall) – cracks the final code on the strength of a fallacy. In recalling Newton’s grave, he remarks that “all the orbs (planets) were represented, but one – the apple that inspired Newton to work out the laws of gravity.” Firstly, Newton died in 1727, before the discoveries of Neptune (1846), Uranus (named in 1850) and Pluto (1930). How then could “all” of the orbs have been represented on his tomb? Secondly, Newton’s apple is an apocryphal tale. It is urban legend. Thirdly, relating a fruit to a planet is stretching a premise to begin with; the fact that the puzzle is solved through this fatuous symbolism only further illustrates how the church can sell provincial fables from Israel as Holy Writ. (If Christian leaders educated themselves in fallacies of this nature, they might be able to make compelling arguments against the media they fear so irrationally. But in believing they have found Truth – and hold a monopoly on it – they stop searching for it.)

As Langdon laments, “Why couldn’t Jesus be married and still be an important figure?” Why indeed? Maybe it’s because I don’t take this issue as seriously as someone who would sit on a bomb or kill another human to prove their love of invisible guys, but The Message that Langdon ultimately tries to impart is impotent and irrelevant.

Instead of standing his ground on the evidence that points to the supposed “truth” of Jesus’s bloodline, Langdon folds to the gutless notion that a lie based on faith is more honorable, or more worthy, than the truth that would destroy that faith. Why are we inculcated to believe this insanity?!

In a movie that trumpets its heresy, who is it trying to appeal to with its eleventh-hour recant? In the greatest paradoxical idiocy of all, the movie’s slogan entreats: “Seek The Truth.”

Dim the lights and I will speaketh Truth: Long before Dan Brown crafted THE DA VINCI CODE, in 932 A.D., after decoding the last writings of Joseph of Aramathea, and on occult information provided by Tim the Enchanter, King Arthur himself, at the Gorge of Eternal Peril, uttered the words which would forever rock the foundations of Christianity:

“Is that an African or a European swallow?”