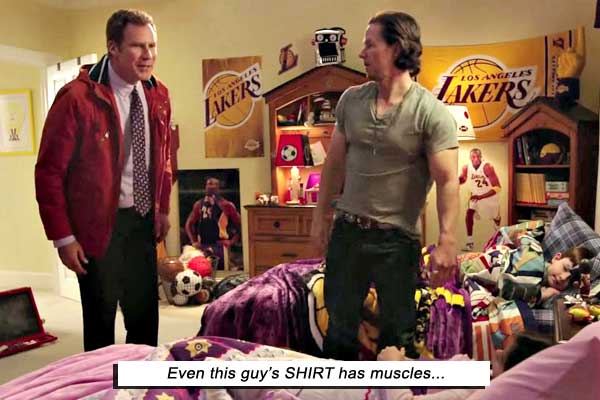 Milquetoast step-dad versus alpha-male real dad. In a battle to the PG-13 reconciliation. What did you expect? If ever there was a movie begging to be R-rated, and missing many comic opportunities for its vanilla rating, DADDY’S HOME is it.

Will Ferrell is Brad, the step-dad trying to connect with two step-kids. He unconditionally loves being their dad, no matter their ambivalence or hostility, which means – PG-13 ALERT! – the denouement will have them loving him back. Linda Cardellini is Brad’s average wife, but here, we discover, a literal “trophy” wife. Step-daughter churns out family drawings showing Brad grotesquely dead in most pics. The one where she portrays a knife in his head, he takes as a sign that “At least I’m not dead in this one.”

Out of nowhere – probably a stint in jail – the kids’ biological father, Dusty (Mark Wahlberg), returns. He’s a muscled, bike-riding, street-tough marauder that gets panties wet on women AND men. Invited to stay with the family, Dusty and Brad quickly devolve to dick measuring for the affections of the kids.

Director/co-writer Sean Anders builds on the chemistry Ferrell and Wahlberg established in their other begrudging-buddy-cop film THE OTHER GUYS, another absurdist comedy, raising the absurdity level in DADDY’S HOME. Yet somehow, some reviewers take it so “seriously” they think they’re onto something when criticizing the absurdity of it. What a screeching wasteland of intelligence is the internet. As in THE ‘BURBS, the moment the two neighbors scream over a femur bone and the camera does the gameshow pan-in-and-out, we can kinda guess DADDY’S HOME is absurdist when Brad loses control of Dusty’s motorbike and ends up stuck in the wall like a cartoon.

The Ferrell-Wahlberg chemistry works so well because Ferrell has once again been relegated to the straight man, Wahlberg again proving he’s a better comedian than dramatic actor by stealing all his scenes effortlessly from Ferrell, even as his character Dusty steals all Brad’s mewling thunder.

Ferrell has always worked better as the comic relief (as in ZOOLANDER), rather than the star (ANCHORMAN). When he is surrounded by better comedic talent (counting Wahlberg in that mix), he excels at supporting their roles.

You can’t miss Thomas Haden Church in his supporting role as Brad’s boss at the smooth jazz radio station where he works. With a surfeit of non sequitur stories that highlight the adventures of his erection, Church steals the show. Hannibal Buress (forever known as the Man Who Outed Cosby) also provides a few choice moments as the black handyman whom Brad must fire to prove he’s NOT racist.

This may surprise most viewers, but Cardellini is also a supporting role, even though she’s The Loving Wifey. (You could never have sold me on the storyline that a woman like Cardellini would marry a milksop like Brad over a dynamo like Dusty, but after reading how Paul Stanley the taut rockstar lost megaluscious Donna Dixon to doughy Dan Aykroyd, I now know anything is possible in a universe this screwy.) Cardellini is so underdeveloped she is a McGuffin – the “prize” the men are wrangling over. So it’s very jarring when she starts a voiceover five minutes before the ending. There was no foreshadowing of her insecurities over looks or age, so why suddenly start pondering these things in Dusty’s new lover? This imbalance extends to the kids as well. We only see them from Brad’s point of view; we never learn what they really seek in him – except money and favors.

It was all about the males’ struggle for dominance. Wife says about Dusty, “He was rugged and I fell in love with his badboy image.” Really? Are all you women dimwitted? The answer is no, of course. Because being attracted to a man like Dusty is, in fact, natural. You’re attracted to the evolutionary fitness a male like Dusty purveys; a specimen who will yield good genes for your offspring and fight off predators who may want to destroy them. But ladies, it works both ways: men also only see the primitive evolutionary fitness in females – so don’t begrudge us for saying “She was blonde with big tits and I fell in love with her slutty image.”

There is a shred of poignancy in Dusty admitting he is back to try to reclaim his family (but it may be missed because he reveals this while doing topless pull-ups (ladies… see above). But most of DADDY’S HOME is played for childish laughs, with effective payoffs. It takes us laughing to the very last frame, and then beats us like a red-headed step-child.