Dan (Steve Carell) falls for a chick who, unbeknownst to him, is his brother’s girlfriend. Chick Flick heaven. 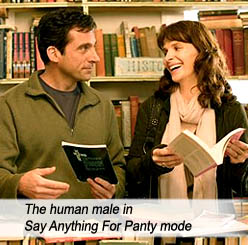 DAN IN REAL LIFE opens with advice columnist Dan, single father of three girls, raising them like the movie dad he is, traveling to a family gathering. We know the movie’s premise going in, so it’s a waiting game for the Meet Cute. When it happens, men will run outside and vomit. It’s that egregious.

Dan meets Marie (Juliette Binoche) in a bookstore and immediately piles on the Inane Chatter (the senseless drivel men dribble while biding our time for The Getting of Panty). Marie burns so much screentime, we figure she must be “the brother’s girlfriend.” Now we sit back and await the reveal for Dan.

At exactly the 25-minute mark – like it says in all the Screenwriting Guides – both Dan and Marie find they are attending the same family gathering, but Marie is dating Dan’s brother, Mitch (Dane Cook). Oh, Wackiness, thou harsh mistress!

We also know that Marie is a slut.

Whoa! Isn’t this just a dumb Chick Flick? Of course it is – that’s why double standards and duplicity, dishonesty and denial are the order of the day, instead of real honesty, which is ironically what women THINK they want from men. Marie is a slut because – as the Chick Council of Romance decrees – when a woman is dating someone, she should ward off alien hormonal males (in this case, Dan) by snidely dropping the word “boyfriend” into intelligent conversation when she discerns the hormonal male’s advance. Marie doesn’t. She lets Dan ramble Inane Chatter for hours.

Chick Flickers will say Marie neglected to block Dan because “they were meant for each other.” Really? Then why is she with brother Mitch? How did the intelligent, well-read Marie ever fall for a dumbski like Mitch in the first place? Movie offers no explanation so we must assume it was that big swingin’ thing between his legs. This brings us full circle as to Marie being… oh, now you get it. After hours of coffee and claptrap, just before she leaves the Meet Cute, Marie tells Dan she’s “seeing someone,” and Dan – like any hormonal male – pushes his advantage, telling her their Inane Chatter seems unfinished, so why not exchange phone numbers because “all we’d be is two people finishing a conversation.”

After I ran outside and vomited, I pondered on whether Marie – or any chick over 13 – would fall for that line in 2007. Director-writer Peter Hedges and co-writer Pierce Gardner must think so. Guess you’re never too old to be a 40-year-old virgin.

The audacity to call their movie “in Real Life”…

Here’s another gem (men, prepare to run outside again): “Love is not a feeling. It’s an ability.”

Wipe the left side… you’ve got some stuff hanging… okay, onward –

The message of DAN IN REAL LIFE is clear: Ladies, time-serve with anyone who mildly amuses you until someone better comes along. The irony is that in Real Life everyone does this – scarring souls and ripping flesh along the way – but no one will admit they are all looking to trade up (or trade across when boredom takes them), sugarcoating the reality of serial monogamy with “love” mysticism to justify the mating proclivities of humans.

Too much for Chicks to digest? Of course it is, so movie is padded with the requisite asinine scenes: girls versus boys crossword puzzle (girls winning, of course, because we all know housefraus are more worldly than their breadwinning husbands); Dan hiding in the shower with his clothes on and the shower being turned on; the family talent show where no one displays any talent (Dan singing Townshend’s Let My Love Open the Door earned him some man points); Dan turning down a lucrative job offer to moon over his True Love; the double standard double date – Marie has already spurned Dan, yet when Dan dirty-dances with another chick, Marie gets fire-engine-red jealous.

DAN IN REAL LIFE serves its vapid purpose of deluding chicks into thinking this is real life. Listen up, 13 year olds: it is not. Take it from someone who has lived through this situation three times (with a cousin’s girlfriend, a drummer’s girlfriend and a roomate’s girlfriend). I played the part of Dan – the “other guy,” without the dweeb trimmings – and still the movie does not resonate with me, because it’s so sophomoric, so Chick-Flicky. I never once hid in a shower, turned down a job or let her beat me at a crossword puzzle. But there was lots of Inane Chatter.

If there is electricity, bide your time, while you do unto others. And the electric girl will be yours one day, ready, willing, hopefully disease-free and unable to get pregnant, overlapping her “monogamous” relationship with you on the side, justifying it to the God of Chick Flick Heaven as both of you “meant for each other.” And you’ll go along with this snivel drivel because of the electric panty…

In DAN IN REAL LIFE, Dan’s whole family busts Dan and Marie “in love” and the sticky problem of the ousted brother must be resolved. He wasn’t a bad person – he was just there for the plot. So Mitch starts dating the Convenient Chick from the double date. Exactly what would happen in real life. Yay! Dan and Marie marry and everything will be joyous and happy and gay from now on because that’s what marriage is in real life.