A Director Dancing With Himself…

Don’t know about you, but I always cringed when Dean Martin would start singing in those old Martin and Lewis comedies; and my flesh would crawl whenever Bing Crosby opened his puling puss during a hilarious Bob Hope movie. 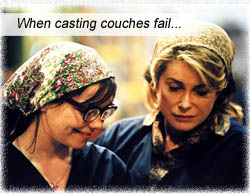 Nothing’s changed. It’s not that I don’t like musicals, or even musical numbers – hell, JESUS CHRIST SUPERSTAR is a classic, Johnny Depp brought a modern razor flair to SWEENEY TODD, and SOUTH PARK: BIGGER LONGER AND UNCUT is a triumph that even Academy Award-winning composer, Stephen Sondheim, acknowledges. I just can’t stand dumb musicals.

Lars von Trier’s DANCER IN THE DARK has so much to offer as a drama – and keeps putting its foot in the puddle of Dumb Musical.

There is so much high-browed commentary and hype about the artiness and influences and filmic ingenuity of this movie that everyone seems to forget that if it does not entertain, it fails. This is not a high-browed commentary – that would put it in the same league as the film itself: self-indulgent, art-house, mildly retarded and strangely psychotic.

Selma (pop singer, Bjork) is a single mother who immigrates to America with her young son in 1964, believing – as so many do – it will fulfill her dreams of glamour and excitement. Instead, she finds herself working a dead-end job in a factory with a friend, Kathy (underused Catherine Deneuve), living in a trailer on a policeman’s (David Morse) property and fending off the advances of a big dumb galoot (Peter Stormare). She is also slowly going blind. She discovers her son is suffering from the same ailment – which can be cured for the right dollar amount. Welcome to America.

Selma is so enamored with Hollywood musicals that she fantasizes she is IN them at odd intervals, writer-director von Trier throwing large old-school production numbers that will either put you to sleep or have you on your feet applauding their audacity.

I don’t think I snored.

“In a musical, nothing dreadful ever happens” – guess she’s never seen LES MISERABLES or MISS SAIGON. And I guess the crucifixion in J.C. SUPERSTAR was a walk in the park.

One night, Selma and Bill the policeman (Morse) confess secrets to each other: he tells her he is broke and fears his materialistic, shrike wife (Cara Seymour) might leave him; she confesses her escalating blindness and shows Bill her candybox cash savings for her son’s operation.

And David Morse, whom we find hard to visualize as a bad man at the best of times, does a bad, bad thing…

DANCER IN THE DARK won the Palme d’Or at the Cannes Film Festival, so it is by no means a bad movie. We all like a little envelope-pushing when it comes to art, until the envelope-pushing becomes the sole point. Von Trier seems to contemptuously thumb his nose at as many filmic conventions as possible, yet uses established story tropes to hook us: the desperate friend who needs money; the infantile, trusting woman saving money for an operation; the frustrating courtroom scenes where Selma keeps a silly promise at the cost of her life and where a few simple arguments from her lawyer would have saved Selma’s neck.

And there’s that flesh-crawling courtroom musical number. Sorry, but von Trier – like Billy Idol – is simply dancing with himself.

In a sense, the musical numbers hammer home Selma’s disconnection with harsh reality. For all those people who believe that love is as portrayed in a Julia Roberts movie or that success is as portrayed in a rock star biopic, Real Life is waiting to fall on you like one of those demolition chimney stacks.

How do you solve a problem like Selma? A flibbertijibbet! A will-o’-the wisp! A clown! “In a musical, nothing dreadful ever happens.” Not counting the musical itself…