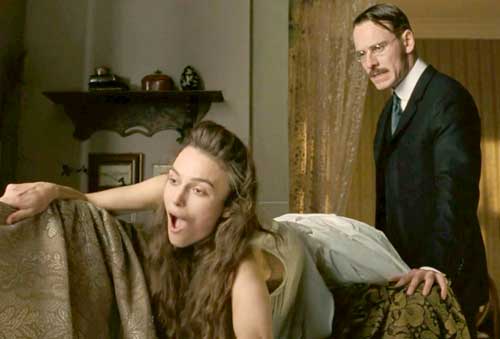 Ah yes, the hunt for puss. Isn’t that why we’re all here? To hunt or be hunted?

Director David Cronenberg turns what could be a grand journey into the minds of two extraordinary psychoanalysts (Carl Jung and Sigmund Freud) into angling at puss. Ironically, that’s what the grand journey of these two minds arrived at – that psychological trauma in adulthood can be traced back to sexual noxae in childhood. Now if Cronenberg and writer Christopher Hampton (from his play The Talking Cure, from the book by John Kerr, A Most Dangerous Method) were focusing on just this “prurient” aspect of Jung’s and Freud’s studies, that would still be a compelling tale of how their theories were originally dismissed and ultimately revered as the cornerstones of psychoanalysis, but no. Movie is a lurid DAYS OF OUR LIVES episode, focusing on Jung taking a patient as a lover, while his wife keeps getting pregnant to keep the family together. How trivial.

Cronenberg secures two of the greatest current male leads to make his movie not suck (Michael Fassbender as Jung, and Viggo Mortensen as Freud, looking like Rade Sherbedgia on quaaludes), yet what might have been a sober probing (no pun intended) into the field of psychoanalysis and the methods of its star players becomes a sniggering, insular beating off (and this time, pun intended).

No matter that these great men had dalliances – their contributions to the discipline of psychoanalysis is immeasurable, so the movie is therefore slightly disrespectful for taking one event and conflating it into the device that motivates them. It would be like making a biopic of John F. Kennedy and making his motivation Marilyn Monroe. And like most of Cronenberg’s films, there is little context of who these world-renowned men are and their place in society; they exist solely to braindance with each other, postulating theories on patients, their own dreams and why David Cronenberg is so sexually repressed.

Keira Knightley is Jung’s patient Sabina, who enters his care as a gibbering spaz and leaves a few years later as a society woman, in between, taking Jung as a dominant lover who whips her while she’s tied down naked. (The only complaint I have with these sequences is that Cronenberg opted to show Knightley topless – for flat-chested women, is that really a boon, or a deal breaker? And if there’s nothing worth seeing, why pretend that there IS, through the duplicity of the padded bra?) It’s a brave role for Knightley, stuttering painfully and going out on a limb to appear ugly, although we must take into account that she is aware – before filming ever started – that it leads to her redemption as a hottie. (I’m sure a lot of men will find that warrior’s jaw alluring but I can’t get past that ironing board chest.)

Of course, in this movie about psychoses, every character reveals just a little bit of their own: Jung cannot perform sexual indiscretions without his own guilt overcoming him, even though we would imagine him above guilt, being an analyst; Freud sees weakness in his colleague Jung, so represses his opinions; Sabina replaces her father’s abuse with that of Jung as a father-figure, making him abuse her; Jung’s wife Emma (Sarah Gadon) thinks that birthing a boy-child after two girls will keep Jung from straying, “Now will you come back to us?”; and Otto Gross, well, I just wanna party with that guy.