If VOLCANO was the fun fun fun volcano movie of 1997, DANTE’S PEAK was its serious big brother. That doesn’t stop it being unintentionally funny.

Geological mystery abounds on whether the mountain shadowing bucolic tourist town Dante’s Peak will erupt or not. Yuh think? Yet Pierce Brosnan wastes his overqualified suaveté as geologist Harry Dalton, sniffing for sulphur and prospective explosions, whilst himself trying to sniff and explode in the man-pants of ugly town mayor Linda Hamilton. (Is it just me or did her muscles in TERMINATOR 2 alleviate the weird face?)

Pre-empting VOLCANO by a mere two months, there is more science, more drama, more romance here than in Tommy Lee Jones’s bombastic vehicle. And in place of the leathered shoe-face of Jones, more Pierce – yes please! 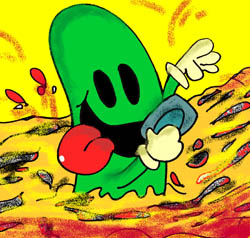 Of COURSE the mountain explodes (did I ruin it for anyone?), and all boredom breaks loose. Running and Screaming with the usual tropes: the grandmother who won’t leave her mountain home, then ends up sacrificing herself for her grandkids (when she hops out of a boat into supposedly boiling water to help steer it to shore, yet looks like she’s just stepped into a pool that’s not heated quite right at the old folks home); Harry’s geologist boss (Charles Hallahan) who disagrees with him, who is proved wrong and dies, his crew watching his van being swept away like they’re watching a physics lecture; there’s even a dog leaping to safety. I hate that. I hate that so much.

And don’t forget the spindly, delicate robot surveyor that can’t even walk steadily on flat ground, sent down the 60-degree slope of the caldera, which it descends at a rate of We’ll-Be-Here-Till-Christmas. Of COURSE it malfunctions halfway down, precipitating a decidedly reckless doughy geologist going ill-advisedly off-rope to fix the useless piece of crap. Of COURSE he breaks his leg during a tremor that rattles everyone’s eruption nerves except their boss’s, who promptly doesn’t put the town on alert.

His death in the van is pretty humorous, but Grandma wins the Funniest Death award here.