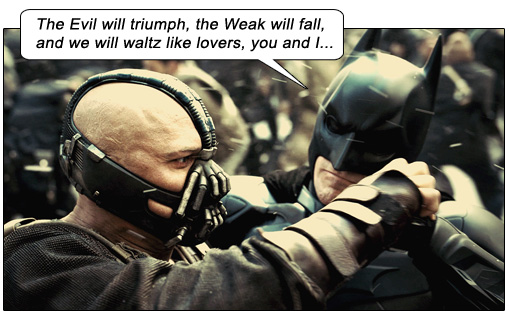 60 years ago writer-director Christopher Nolan would have been one of the premier exponents of film noir. Conceptually and cinematically, his DARK KNIGHT trilogy is one of the most somber excursions into dual personality crises, moral relativism, vigilantism and nihilism. And Batman would have been Humphrey Bogart. “Here’s lookin’ at you, Gotham…”

Just as dour as Bogart, Christian Bale lends his gravelly throat to the Batman (and a less-gravelly version to alter ego Bruce Wayne) one last time in THE DARK KNIGHT RISES. 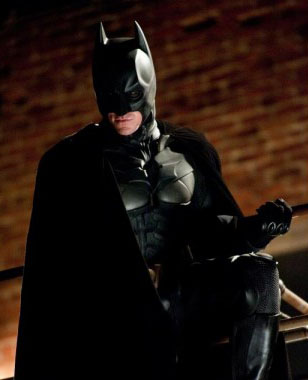 Eight years of peace in Gotham, the Batman absent, Bruce Wayne a recluse. A powerful new foe forces Batman out of retirement, threatening to rend the very fabric of Gotham society apart with class warfare, a nuclear bomb and a breathmask that gives him an unintentionally amusing Continental accent – Bane (Tom Hardy, pumped up like a tractor tire), who robs Batman of his very essence, his dignity, his mystery, and his tight black superduds.

RISES continues to draw its bleak tone from Frank Miller’s breakout graphic novel The Dark Knight Returns. The Batman is tired. His wealth has been lost, he’s got a busted knee, at his age he’s probably got Low-T, and fey Eames from INCEPTION is kicking his ass. His fatalistic streak is now a mile wide, which causes his faithful liege Alfred (Michael Caine) to turn into a weeping girlyman. If we can measure Oscar potential by how much an actor cries, then Michael Caine has the Supporting Actor gig in the bag.

There’s a young cop who knows Bruce’s secret identity (Joseph Gordon-Levitt, who will reveal a secret identity all his own in the film’s final frames); Commissioner Gordon (the great Gary Oldman) is in the hospital, due to skulking under manholes and getting blown up – no matter, as he employed the tried and true STAR TREK recon formula: take a coupla dispensable extras. Liam Neeson (who wouldn’t make a return appearance for George Lucas – not even as ectoplasm) returns as Ra’s Al Ghul’s ghost, Cillian Murphy is the Scarecrow Judge, and Marion Cotillard is a Gotham socialite who beds Bruce Wayne even when the electricity has been turned off in his mansion (as one character laments, “The rich don’t even go broke the same as the rest of us”). And though he vowed to quit Wayne Enterprises over Batman’s unethical tapping of cellphones, Lucius Fox (Morgan Freeman) returns – probably because the government has perpetrated so many worse illegalities, phone-tappage looks like cheesecake.

Anne Hathaway is all pouting butt-leather as Selina, a cat-burglar who is never called Catwoman. And I think Batman lets her borrow his bat-bike just so he could see her sit in that position…

Something happened around 2000 with the advent of X-MEN, continued in Nolan’s own BATMAN BEGINS in 2005 – the tone changed, the narrative skewed. Superhero movies started fearlessly probing into what made everyone tick, the “righteous” and “evil” alike – they were not just dull thuds between good guys and baddies anymore (as in the 70’s SUPERMAN or 80’s BATMAN). Most modern superhero tales explore the same theme as DIRTY HARRY (1971) – the hero and villain being two sides of the same damaged coin. As Above, So Below. Daemon Est Deus Inversus.

RISES is an action-adventure of course, but much more: an epic mystery-thriller, foaming at the teeth with redemption, damnation, sacrifice; exploring the nature of heroism and the roots of fear; vast in scope – involving the legal thieves of this world (the government), the lowest thieves (guys stealing apples), and the highest thieves (Wall Street) – and enough terrifying real world resonance to stun an Occupy Movement. 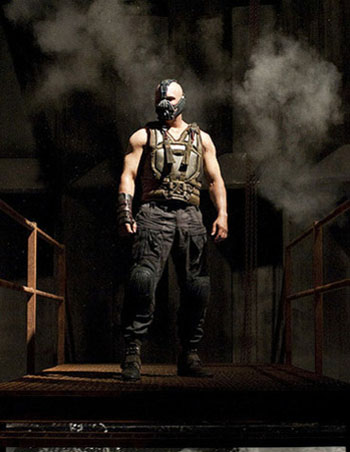 The eternal struggle between good and evil interior design.

The characters are not simply played against each other like tropes – it is a complex dance of motivation and madness:

Alfred’s sorrow is a paradox: never wanting Bruce to return to the pain of Gotham, yet supporting his gig as Batman nonetheless; thusly reneging on his promise to Bruce’s father to protect him! He can no longer shoulder the sacrifice of serving the Wayne family if it means watching his charge martyr himself.

When Selina gives up Batman to Bane, it is almost like the reasoning behind Judas’s betrayal: I’ll surrender Christ to the Romans, but in doing so I’ll force his hand to kick their butts! But Bane is stronger, younger, faster than the old warrior. In an homage to the 1993 DC comic arc Knightfall, Bane breaks Bruce’s back. And throws him into a pit in WhereTheFuck-istan.

Commissioner Gordon can no longer shoulder his personal damnation of letting Gotham think Harvey Dent is a martyr. Bane is there to expose Gordon’s and Dent’s great lie, spurring Gotham’s very own Occupy Movement.

And Batman has never been the cheery quipper like Spider-Man or Iron Man, but his brooding darkness has enveloped him here until we see nothing but a psychological case study – someone seemingly as damaged as the villains he is supposedly trying to quell. Where is the line between good headcase and bad headcase? When Bruce/Batman confronts Bane, he knows it is a lost cause, yet he does so to confront his own demons – his doubts about being a worthy savior for Gotham. And Bruce realizes that no matter how much he has sacrificed for Gotham, his role as the Batman would never have closure until an ultimate sacrifice is made. Would this be that sacrifice? Our heroes have always been immortal. But RISES teaches us a new fear: mortality.

All this time we’ve been told a hero DOESN’T fear death; that’s what makes him invincible. But when Bruce is broken and cast into the Pit, an old prisoner tells him not fearing death is what makes him WEAK. You HAVE to fear death in order to avoid it.

Long before this trend of robbing superheroes of everything that makes them super (THOR, SKYFALL, IRON MAN 3, etc.), it would be wrought on Clint Eastwood’s avenger in UNFORGIVEN (1992). Eastwood, the eternal revisionist, was unknowingly revising the superhero trope with David Webb Peoples’s magnificent script – a superhero tale replete with moral ambiguity, a hero on the knife-edge of being the villain, and the hero brought low so he could rise up again. 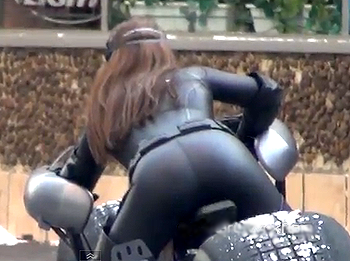 In Batman movies, cops are notoriously useless. Just like in real life. To search for Bane’s nukes, the whole Gotham police force hold hands and goes skipping underground. And Bane traps them like lemmings. Credit to Nolan for considering that the police force would be involved in a citywide alert, yet demerits for handling their excising from the plot in such a juvenile manner.

There are other plotholes, but it seems like nitpicking when Nolan has crafted such a sincere character study. Even “Honest Trailers” – a YouTube channel that is usually quite incisive – resorts to picayune sniping, “How does Bruce Wayne sneak back into a quarantined Gotham?” Well, he is the Batman! “There’s only one riot – seriously?” So you want the movie to be ten hours long depicting every single riot that occurs? It’s called time-compression. I could go on, but you get the point.

And for those who have a problem with the Batman being stabbed and then giving a soliloquy, while the knifer is just holding the knife in his guts and listening, well, I guess you’ll just have to go back to watching all those Shakespearean heroes dodder around the stage after having been skewered or poisoned and lamenting their deaths for two pages before keeling over. Who knew Batman was so Shakespearean?

For me, the most annoying action device is:

I don’t see the point in fist fighting any more. Bane versus Batman. In a world where myriad weapons can be used to bring down either one of them. Is it an honor thing or an image thing? Is it because we’re used to seeing the Batman use this inane method of resolution that we don’t question why they should punch punch punch? Yet Bats feels it necessary to Kapow and Boffo; I’m presuming it’s an “inner demon” thing – but even so, is it about saving Gotham or measuring his dick? Then upon his Rise, he goes back for MORE punching. Punching only exposes you to being close enough to this superior fighter so that someone else can slink in while you’re distracted and put a knife in your side.

THE DARK KNIGHT RISES is an unflinching excursion into the human psyche that any noir director would have been proud to helm. I can just picture Humphrey Bogart chewing that stogie. In tight black pantyhose.

On the dark periphery…
• OCCUPY
Rumors that Nolan was filming actual Occupy Wall Street riots. Much like futurist Alvin Toffler in Future Shock 1970, or fictional “psychohistorian” Hari Seldon in Asimov’s Foundation, 1951, Christopher Nolan has his finger on the pulse of the grand arcs of humanity, depicting an Occupy Movement-type uprising, congruent with the same thing happening in real life – over the same topic, upper class greed! Prescient or serendipitous?

• BANE/BAIN
The destroyer of society in RISES is called Bane; Mitt Romney’s vulture corporation that destroyed companies was also called Bain (different spelling). Again serendipity, as Nolan was only using an already-existent Batman character – at the same time that Romney was running for president and trying to claim how nice he was in that fake smile and faker pants. But Bane would be his bane, reminding people of Bain, which was his true bane.

• THEATER SHOOTING
An imbecile dresses as Ledger’s Joker (from THE DARK KNIGHT) and shoots up a theater in Aurora, Colorado during a screening of THE DARK KNIGHT RISES. I was speechless with outrage that the idiotic news media would continue to title footage of the theater as “Dark Knight Shootings.” Eventually they stopped this libelous malpractice, but it led to poor Christian Bale having to embark on a Damage Control goodwill tour, because no doubt at this stage he would have signed a contract for points on the back end, and he doesn’t want to jeopardize his earnings by having the film boycotted. Am I being too cynical? With news media irreverent enough to tie his movie to the shootings for more advertiser dollars, is it any wonder he has to be so venal to combat people so venal?

Batman versus Batman
Keaton or Bale?
A blow by blow comparison.