Do not go gentle into that good knight…

Good men, the last wave by, crying how bright
Their frail deeds might have danced in a green bay,
Rage, rage against the dying of the light.
– Dylan Thomas

If Batman is the untamed world, The Joker is the unbalanced world. THE DARK KNIGHT tells us humanity lives somewhere in between. 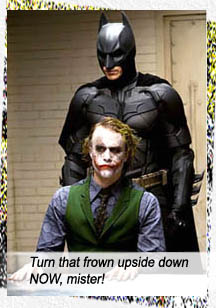 In Christopher Nolan‘s sequel to BATMAN BEGINS, we hit the ground running, cape flouncing dramatically, cowl turned sideways so we can only see through one eyehole; claustrophobic scream rising as Gotham City is terrorized by The Joker, while the Batman, Commissioner Gordon and District Attorney Harvey Dent join forces to stop him at the cost of lives, ethics, reputations… as simple as this outline reads, director-writer Nolan and co-writer, Jonathan Nolan, have elevated this comicbook tale to tragedy on an operatic scale.

Christian Bale is once again Batman/Bruce Wayne, all muscled arms and intense quietude; Michael Caine, his outspoken, fiercely loyal butler, Alfred; Morgan Freeman is technocrat Lucius Fox, who delineates the ethics slur that Batman commits (a grave nod to the Amerikan FISA bill: surveilling innocents to capture the guilty); the mighty Gary Oldman in a straight-up role as straight-arrow Commissioner Gordon; hourglass Maggie Gyllenhaal thankfully replaces dull-as-decay Katie Holmes as Assistant D.A., Rachel Dawes; Aaron Eckhart makes a killer Harvey Dent, tragically transmogrified into Two-Face; and – let me slurp some poison syrup and do that Hannibal Lecter thing when he talks about Chianti – there is… The Joker…. 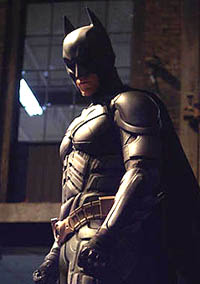 The tragedy mounts its gargoyle perch, as Gotham realizes too late that only a city overseen by a caped vigilante would be prone to inspire villains as flamboyant as its protector. The very fact of a Bat-man’s existence SPAWNS incarnations as bent-backwards as The Joker. For the first time on film since his appearance in comics/graphic novels in 1940, The Joker is the heart attack Cadillac hell-on-wheels insanitarium he was always envisioned to be. And 27-year-old Heath Ledger – in his swansong performance before his untimely death – does not go gentle into that good night. 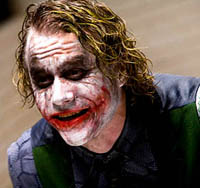 Was it ever imagined that someone on this earth could out-Jack Jack? And what mad fate that that one man would leave this earth after his most throat-slicing role… Heath Ledger’s kamikaze performance as The Joker runs this movie on a scalpel-edge; a role so black and purple and psycho-delicious, it turns our hair green with pus. His origins are never explained, his motives are never explored –

“Some men just want to watch the world burn.”

This man’s performance – a jerking, lip-licking, scab-scratching display of pure id, even outblazing the tremendous movie-making and scriptwriting quality – gave the film-makers the steel balls to launch one of the tastiest advertising campaigns in history: from the posters to the online teaser pictures, each calculated release cohering with the overcast thematic sway of the movie. Dark, raving beauty, crossing stargates to encapsulate the film itself, the opening featuring no credits, just the bat logo in blue flame searing towards us…

The first scenes allude to the “Sons of The Batman” in the graphic novel The Dark Knight Returns, where do-gooder impostors don Batman’s fearsome cowl and cape to bring frustrated vigilante justice to their corner of Gotham. The Scarecrow (Cillian Murphy) smarms a small cameo. After this pat action beginning, The Joker rears his painted head.

And everything gets pear-shaped.

We meet The Joker in a convoluted bank robbing scene (with William Fichtner in a small but powerful managerial shootist role), where double-crosses and triple-crosses against his own henchmen illustrate exactly how saw-toothed the cogs of The Joker’s plans are. He plays by no rules, thriving on the chaos he creates from the tripwire of civilized society. We soon realize this is not Cesar Romero’s hooting fruit from the 60s television show, nor is it the colorful crazy goon from the cartoons or comics – this is the scariest joker imaginable; the clown that scarred you as a child; the trailer-trash magician who would just as readily kick your dog to death as twist you a balloon animal.

With his psychological profile lifted from the graphic novel Batman: The Killing Joke – “All it takes is one bad day to reduce the sanest man alive to lunacy” – The Joker launches a plot to undermine the underworld as well as the overworld. Plans within plans, wheels within wheels, moral ambiguities piled upon moral turpitude. Playing humanity’s own dark side against its gray side.

Meanwhile, Wayne Manor is still in ruins and Bruce Wayne operates from a giant subterranean crawlspace. We feel as displaced and claustrophobic as he and Alfred, not only in that low-ceilinged lighted vault, also in their ongoing quest to keep the Batman’s name free of scandal and to simultaneously protect Gotham from The Joker’s demolition smile.

It is harder than it looks. In this reality-based world, vigilantes are a mixed blessing, as Harvey Dent walks a tightrope of tolerance for Batman, on the word of Commissioner Gordon. Meanwhile, Bruce’s love interest, Rachel Dawes, is Spanking Panties with Harvey right in front of Bruce, which drives him batty.

At one point, Bruce almost gives up being Batman for the sake of Rachel’s spank, because it truly looks like Harvey is making headway in cleaning up Gotham. In not being bought or negotiated with, Dent has become Gotham’s “White Knight.”

Then The Joker happens…

This is not a simple film by any means and the moral dilemmas each protagonist is made to face by The Joker are astoundingly well-crafted. Even Batman sometimes comes across as an unlikable hero: when The Joker gives him the choice to rescue either Rachel or Dent in two factories across town from each other, rigged to explode, our jaded inner voice tells us that the Hero Always Saves The Girl – but when the spike-gloved fist smashes through the door, it is DENT that Batman is saving (I guess he thought Rachel was still being played by Katie Holmes), because tactically, Dent is the stronger opponent against the crime that Batman rails against; he has become a symbol worth saving.

Dent is injured during his rescue, half his face chemically burning off, but his resulting “split-personality” as Two-Face is not the simplistic madness of Tommy Lee Jones in BATMAN FOREVER; not just a physical or mental bifurcation, but the moral ambiguity of an avenger who has seen both sides of the good/evil fence – and they’re both the same but for one bad day! The Joker – in playing good against evil, antipathy against anarchy – unwittingly achieved a poetic symmetry in Dent. 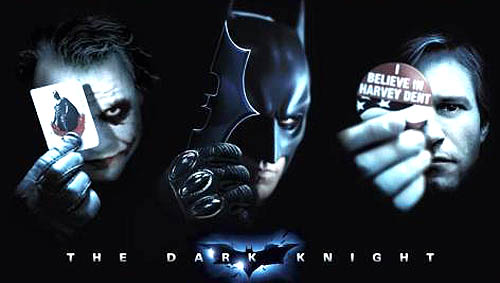 As if to vindicate The Joker’s cackling assessment of good and evil being on the same page, Batman resorts to spying on Gotham’s citizens via their cellphones, to pick up possible transmissions from the Joker and locate him. Lucius resents this intrusion of privacy and quits. In this film, we are told the only way to catch someone who plays by no rules, is to abrogate ethics yourself. Is that the only option?

In the real world, that’s how controversial a figure like the Batman could become. It’s all very well to advocate beating a bank robber with a well-placed KAPOW in comics. But take it further than the simple drawn frame: how does Batman identify criminals anyway, and what evidence does he have BEFORE punching them out? Criminals don’t ALL come in horizontal-striped, long-sleeve shirts and run around with bags of money with dollar-signs on them. Some of the lowest criminals we know wear five-thousand-dollar suits and live in the White House.

But that’s another operatic tale.

Speaking of operatic, music is by Hans Zimmer and James Newton Howard. No wonder my Grandiose Nerve was twitching.

This is not “just” a superhero movie – oh, it’s got all the action you could want – that Bat-Hummer thrashes through traffic and then births a spiffy Bat-Bike; Batman swooshes through the night and delivers chest-kicks aplenty, and a hospital goes kablooey! – but THE DARK KNIGHT questions everything ABOUT heroes, and takes itself just as seriously as The Joker doesn’t.

Bruce Wayne’s dual personality issues are put aside in THE DARK KNIGHT, as it concentrates on delving into the Batman’s own dual roles – that of protector and lawbreaker.

In a sad irony, Ledger’s Joker lifts another allusion from The Killing Joke when he tells Batman they are “destined to be doing this forever.” The Joker’s fate in the movie is ambiguous, left hanging upside down from a skyscraper girder, cackling, as always, as if in on a joke that only he gets.

As Batman burdens himself with the sins of Gotham, shoulders the blame for the gray crimes of White Knight Dent, so that society won’t crumble when their belief in heroes is shaken, Gary Oldman’s words ring the messianic outro, to the question his son asks, “Why must he run?”:

“…Because he’s not a hero. He’s a silent guardian, a watchful protector, a dark knight.”

Though wise men at their end know dark is right,
Because their words had forked no lightning they
Do not go gentle into that good night.
– Dylan Thomas