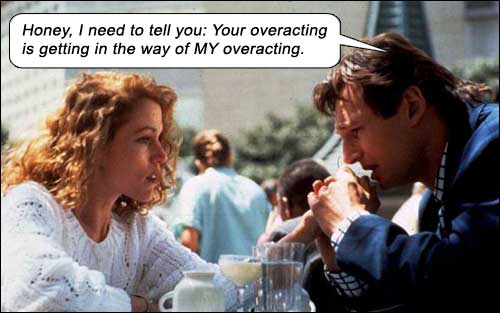 Liam Neeson’s first encounter with the dark side… of acting!

Back before Sam Raimi knew how to direct, and before Liam Neeson knew how to act, there was a patchy, deformed quilt of sophomoric acting and gloved-thumb editing called DARKMAN.

Supposedly a “superhero” movie, now a cult film, DARKMAN has dated badly since its 1990 release (a release date that meant it was basically an ’80’s movie, reflecting all the dopey synth music, trashy practical effects and boorish executive trousers that decade offered). Sam Raimi (who would go on to future successes with his SPIDER-MAN trilogy) wanted his own Batman-type character, so created this story of a scientist that is thought murdered by gangsters, who emerges as a deformed night vigilante out for revenge.

Scientist Peyton Westlake (Neeson, forced to use an abominable American accent) has almost discovered how to create synthetic skin (to aid burn victims); its only flaw is that it disintegrates after 99 minutes when exposed to light, yet can remain stable if kept in the dark. Meanwhile, his girlfriend Julie (Frances McDormand) runs afoul of some executives in boorish trousers, who send out gangsters to rough her up for a McGuffin document, find Peyton instead, and leave him for dead in an explosion. Rescued by some callous hospital staff (headed by the stunning Jenny Agutter), Peyton is bandaged and given some drug that negates his burned nerves, allowing him that “superhero trait” of not feeling pain. He flees the hospital to roam the stormy night (for some inexplicable reason – one would think you’d stay in a place that is trying to heal you. Or maybe he figured the truth that it would be less painful to die slowly in the streets than go through the American health care system.)

Peyton dons a grubby overcoat (superhero cape), keeps his head bandaged (like a mask), sets up a lab in an abandoned warehouse (his batcave/fortress of solitude) and poses with gargoyles (like a superhero bitch). In this makeshift lab, Peyton uses his synthetic skin machine to create gangsters’ head masks, using them to foil the gang from within.

The gangsters are led by Robert G. Durant (Larry Drake from L.A. LAW, soon to be DR. GIGGLES in 1992); the corporate head is Aussie Colin Friels (also using an American accent). These two characters are the nominal villains to exact revenge upon.

The trailers blast, “Crime has a new enemy” – but no, it doesn’t. Peyton is not really a “super” hero, and only out for revenge on the men who “killed” him. Written by Raimi and a bunch of questionable friends, DARKMAN boasts some interesting transitions, some disturbing concepts, and the worst chromakey since SUPERMAN IV. Filmed like a comicbook, with occasional colorful panels and flamboyant performances, I understand the pulp tone that Raimi is attempting – and maybe it succeeded for comicbook fans back in 1990 – but every scene of the movie is so negligently written and purveyed that we smell either low budget, not enough rehearsal, or striking ineptitude. 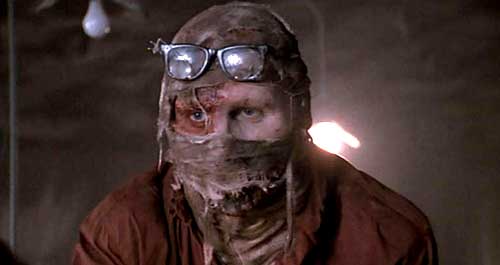 Behind the mask – the geek.

Even if we forgive the blustery “indicating” performances across the board (actors “indicating” their emotions rather than experiencing them, with Frances McDormand especially at fault in this department), almost every scene takes us out of the film with its incoherence, mistakes or careless construction:

There was a gloomier aspect of DARKMAN that went completely ignored: nerve damage. Without nerves to feel pain, you are basically a leper. Contrary to popular belief, body parts don’t fall off lepers due to leprosy itself, but because without the ability to feel pain, your body experiences repeated injuries that are not felt and get infected, until they fall off (nowhere in fiction have I seen this condition better described than in Stephen Donaldson’s fantasy masterwork, The Chronicles of Thomas Covenant the Unbeliever), so when stricken with the disease, you must be insanely vigilant of your body. And edges. Not so with DARKMAN; whereas our hero could have had another disturbing element added to his psychosis, he instead goes around offhandedly smashing things, flailing in the dark in rage, grabbing sharp objects, breaking through glass – he’s a regular Incredible Hulk.