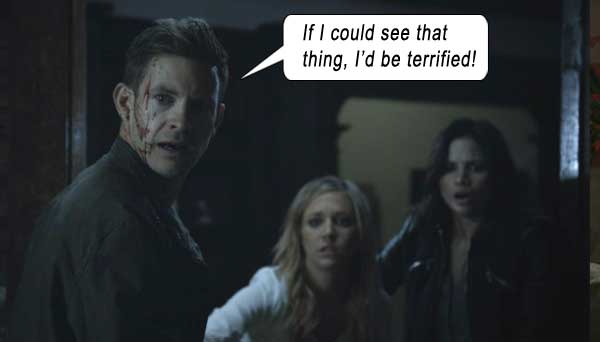 Three 20-somethings explore a decrepit house and die from ghosts. So it’s a happy ending. Because we started rooting for the ghosts about five minutes in.

The writing (by Vikram Weet) is astonishing for its blandness – nothing creative or interesting at all. The directing (by Austin Reading) is basic and soporific, all filmed in darkness (for the sake of making the film title make sense?), with jumpscares that fall flat and special effects that rival Bugs Bunny cartoons. The acting is so juvenile and indicating and stunted, that if I didn’t check their résumés on imdb, I could have sworn these three leads were doing their first film – or doing someone a favor for losing a bet. It doesn’t help that every time any character says, “you guys” in that valley girl accent, I vomit.

I think I can highlight the five most repeated lines of dialogue:
“I don’t know.”
“Please leave us alone.”
“Fuck.”
“What is happening?”
“Shit.”

Which is ironic, because that also describes the movie perfectly.