A night to (kinda) remember.

DATE NIGHT is an adequate comedy with exactly three high points, about married couple Phil and Claire (Steve Carell and Tina Fey) in a rut; unrewarding jobs, three kids, no sex. On one of their regular Date Nights, they raunch it up a little by going into the city of Manhattan for dinner; at a hip restaurant, they claim another couple’s table, feeling it’s the craziest thing they’ve done. But the night has just begun… 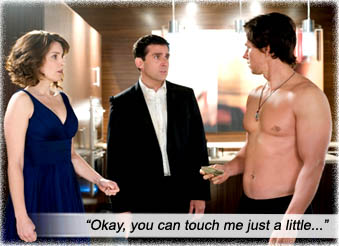 Through a series of mixups, the couple gets involved with crooked cops, pervert attorneys, car chases, robberies, mobsters… and Marky Mark with his shirt off.

I didn’t forget you, my squealing piggies – the three high points of the movie:
1) A unique car chase with two cars stuck to each others’ front ends.
2) James Franco and Mila Kunis as a trash-talking trash couple.
3) Marky Mark with his shirt off.

Directed by Shawn Levy (NIGHT AT THE MUSEUM), written by Josh Klausner, action and dialogue is generally entertaining, but is defiantly raised whenever the cameos arrive: Ray Liotta as a mobster (big stretch), Mark Ruffalo as a dissatisfied husband (somewhat tautologous), William Fichtner as the pervert attorney.

Steve Carell brings the Everyman with the nasal personality, Tiny Fey brings the naive gorgeous, Common brings the gangsta, James Franco brings the meaningful tatts, Mila Kunis brings the devoted beeatch, Mark Wahlberg brings The Shatner and does his whole role shirtless and body-oiled. By far the funniest thing in the movie. Drink him in.

Later, when talking about how Claire “lit up” when confronted with Marky Mark With His Shirt Off, Phil complains, “…And why do you need muscles on your shoulders like that?” There is a touching moment where Claire complains she can’t “light up” for Phil that way because her day is so traumatically busy – and he doesn’t argue, but comes to her rescue, “I’m not saying your day isn’t hard work, but there’s someone there to help you with the burden – me.” It’s a peek into the heart of men that most women usually steamroll over with talk talk talk about me me me. Take note, ladies. If you are there for us, we are there for you…

Pause on Marky Mark With His Shirt Off…

William Fichtner: Prince of Cool.
I rank Fichtner alongside David Morse as Solid Character Actor Who Never Got The Shot At Leading Man. From his blind astronomer in CONTACT to his rugged astronaut in ARMAGEDDON, from his mob-tough banker in DARK NIGHT to his seadog in PERFECT STORM, he has only ever brought A-game. But there’s always a Willis or a Clooney in the way.