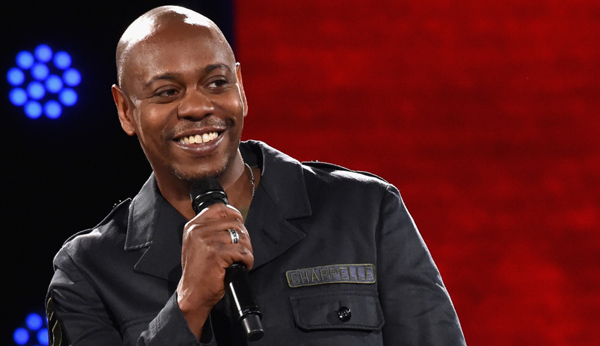 Dave Chappelle in the No Spin Zone.

Comedy icon Dave Chappelle returns to the standup arena after a decade, to prove he’s everything that the legends say he is.

Like any icon who disappears from the scene (for any reason, up to and including death), Dave’s legend has outpaced his reality. So AGE OF SPIN seems like it starts slow – but it’s just that we expect to be creamed right outa the gate because of “the legend.” There’s an unsustainable arrogance and an unattainable quality when one is regarded as legend, but Dave would be the first to tell you to stop calling him that – for exactly that reason. He is merely a human. In fact, one of his first bits is how he bombed recently, and how he had to do a second agita-drenched night at the same venue. It’s to defuse his prevailing legend status…

Part 1 of a two-fer Netflix package, DAVE CHAPPELLE: THE AGE OF SPIN (filmed at the Hollywood Palladium in March 2016), is actually the later routine. So in retrospect, I cannot understand why Dave seems less confident at this second gig. By a smidge. It’s not like he walked out shaking – but in Part 2, DEEP IN THE HEART OF TEXAS (filmed in April 2015), his confidence looks miles higher; he’s grabbing them by the pussy.

And that’s another thing: With the ascension of Trump, these two features from “Dave’s vault” (so the junkets tell us) were completed just before that orange idiot’s comedy goldmine presidency. So there is definitely a social vacuum noticeable in Dave’s routine; in his observations, there is a massive “neglect” for the political landscape that these two features were released into.

Yet Dave is in fine form. He looks old. Because we haven’t seen him age gradually. It looks like the industry that he shunned has taken its toll on him. His delivery is not the whipcrack it was in his younger days, when his voice was more strident. Yet when he gets going, it rolls as smoothly as one of the blunts he obviously inhaled before coming out here.

Like the veteran he is, Dave starts slow – there is a decidedly mediocre bit about a gay superhero, who must “rape to save” – winding his way through more seemingly innocuous material – until he hits Bill Cosby. When that punchline repeats in reference to The Cos, it’s all over. That’s when we realize: The legends are true.

There’s Caitlyn Jenner (missing Bruce the superhero), OJ (four meetings with Dave that will change the course of history. Or not), the Space Shuttle disaster (seeing it on TV as a kid), and a small bit of advice if we see him on DANCING WITH THE STARS (“It means, that shit is over”).

Throughout these routines, the overarching theme is how the public perceives the events through the media. In this Age Of Spin, he admonishes the younger generation for being force-fed the equivalent of a Shuttle disaster every few minutes through social media, until it inures them to disasters.

“I lived in an age when you didn’t know who was on the phone – until you answered it.”

It’s a damning social observation that will only exponentially get worse. Dave offers no solutions, except his one small contribution to society– disallowing people to use cellphone cameras anywhere around him, either during shows or just walking down the street. It seems like an extreme asshole move (almost like Prince, during his life, rigorously keeping his music from propagating through social media), but it’s the right thing to do. For his comedy. For his financial security. For humanity.

I still don’t agree with his beef about KEY & PEELE “doing his show” – they took the ball and ran with it, Dave. You left a vacuum — they filled it. The only person you have to blame is yourself. His point is: he kicked down some doors for them to actually run with the ball…

An opening monologue by Morgan Freeman ties Part 1 and Part 2 together. The voice of God commenting on the voice of a god. Hmm. Is that arrogant enough for Dave?