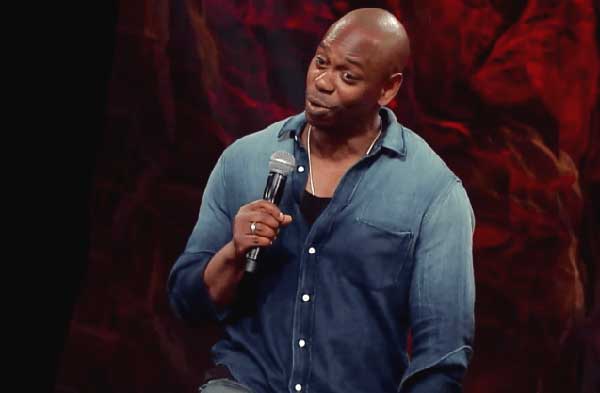 The question on everyone’s minds: How much you bench, brah?

Bigger and badder than THE AGE OF SPIN, Dave Chappelle’s second stand-up show in this two-fer Netflix presentation, DEEP IN THE HEART OF TEXAS, finds him more at ease and hitting more knockouts and home runs than in Part 1. (Or is this Part 1? I guess director Stan Latham felt that TEXAS had the more powerful vibe, which is true, and which is why it’s the second feature – to end big.

TEXAS (#2) was filmed at Austin’s Moody Theater April 2015, and SPIN (#1) was filmed at the Hollywood Palladium, a year later in March 2016. Yet the marketing obfuscates the timeline with the slogan “Two Cities. One Event.” Isn’t this two shows? Or is it one show edited into two parts? Or two shows edited to look like one tour? Marketers lying yet again. Any surprise? (This was never “one event” until YOU put them together in ONE video. By Dave’s telling, these tapes were just lying around, and he decided it was time to release them.)

Opened again by a vignette featuring Morgan Freeman voiceover, HEART OF TEXAS sees Dave swaggering out in a shirt that makes it look like he’s just slipped it over his pumped delts after a workout. He’s rock star from the get-go, with his leg up on the foldback wedge, the camera angles, the hip couture, the better impact of the first anecdote (no cockamamie stories about how he bombed, to play “apologist” for his legend status), and the fact that he looks like he’ll break you in half if you don’t laugh. He IS Dave Chappelle, the Legend. He looks more spry, more youthful – or is he just less stoned?

In an interview, Dave says people are commenting on how he’s put on weight, attributing it to being able to rest and not stress about his CHAPPELLE’S SHOW, which shot him to untold fame, fortune and agita. But it’s not fatty-boomsticks weight – those are muscles, not marriage-gut. He looks positively swoll. 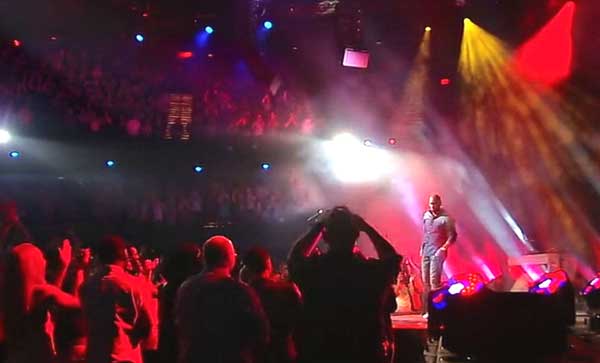 George Carlin’s style was to chide humanity for its stupidities, much like Chris Rock’s attack-dog style, but Dave’s style is like having a drink with a friend and bringing up something you just realized was weird with society.

I also like the way that swearing has become no big deal these days in comedy. Comedians who used this many “motherfuckers” in their sets were once called “blue,” but Dave is by no means “working blue” – other than a bit about masturbating to a video of himself fucking, there’s nothing really “dirty” about the set, unless you itemize only the swear words, which, by the way, are not used as punchlines in lieu of comedy, but rather sprinkled in conversationally. Eddie Murphy in RAW made such a fuss of people making a big deal out of his lewd language. Thankfully, it’s part and parcel of adult comedy these days.

And honesty. There is no dark corner Dave fears to tread. From admitting to cultivating two female friends while asking their opinions on male chauvinism, to rubbing one out to that sex-tape of himself that was mailed to him for blackmail purposes, Dave gives voice to our id.

Dave Chappelle has done it; made himself relevant once more, fought past the stultifying aura of “legend” to deliver two great comedy specials. So… Is this a “comeback?” Does Dave get a new comedy show, a sitcom, a tentpole movie role? Did Dave ever go away? Well, uh, actually, he did. After his sudden sabbatical to South Africa in 2005 to escape the travails of fame, the question on everyone’s minds was, “Is Dave Chappelle finished? Was he some kind of wacko prophetic genius that blazed like a comet across the sky, only to fall into the ocean a burned-out useless rock?”

You know what they say: Legends never die. They just get swoll.