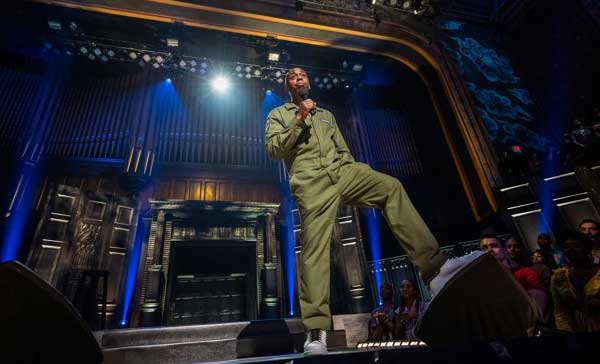 Dave didn’t get bigger. The minds got smaller.

I was dreamin’ when I wrote this, forgive me if it goes astray
But when I woke up this mornin’ could’ve sworn it was Judgment Day.
The sky was all purple, there were people runnin’ everywhere
Tryin’ to run from the destruction, you know I didn’t even care…
— “1999,” Prince.

Dave Chappelle calls the world a bunch of sniveling whiners, and the world shouts back, outraged, “YES WE ARE!”

Constant negative headlines about Chappelle’s STICKS & STONES caused me to: 1) be aware it was released and, 2) enjoy it with extreme prejudice. If those woke SJWs who consider themselves sophisticated critics had kept their mouths shut, the Special would’ve fallen through the cracks of this limitless-content social dungheap we call civilization. Instead, their pansy-ass vitriol served to rocket Chappelle’s latest standup effort into the public consciousness and garner a 99% audience approval rating on idiotic-yet-somehow-credible Rotten Tomatoes.

But what exactly is in this Special that has driven PC Police apoplectic? How has Dave fallen from his grace as god-like social commentator? Why is everyone so goddam persnickety all of a sudden??

But let’s back up for a moment. Dave opens the Special by quoting the opening lyrics of Prince’s 1999. As the shoulder-jabbing show rollercoasters forward, we realize Dave has a personal connection to those lyrics. Early in the show, he does an impression of a dumb-sounding person digging into your past, coming up with shit, and vowing to bring you down for that shit. And he tells his crowd bluntly “That’s YOU! That’s what the audience sounds like to ME!” Cheers, laughs. “Because you niggas is the worst motherfuckers I’ve ever tried to entertain in my fuckin’ life!”

So it’s ironic that the first reviews out of the gate were exactly what Dave predicted.

He uses Anthony Bourdain’s suicide to make the point that you could have everything and still not be happy; he counters that with the example of “a nigga from the hood” that led a very misfortunate life and still never once thought to kill himself.

Dave leans into the “alphabet people” bit by first pointing out the double standards employed by the Standards & Practices Bureau on his very own CHAPPELLE’S SHOW. They tell him, “You can’t say the word faggot on TV.” To which he asks, “Why then, can I say nigger with impunity?” There is no reasonable answer. Thus, one must have to assume: “No matter what you do, you are never ever allowed to upset the alphabet people… them Ls and them Gs and them Ts. Apparently the Ts hate my fucking guts – I can’t stop telling jokes about these niggers…”

It’s the most creative routine of the night: all the letters travel in one car, their destination – Acceptance. Driven by the Gs (because they’re mostly white men), each of the letters displays its chagrin for each other letter, all exhibiting the funniest stereotypical traits they are known for… This bit works so well not just because of the raunchy jokes, but because Dave makes an eye-opening observation (which no one gives him credit for) that proves his empathy for all these downtrodden Others. They might be traveling in the same car, but “all those letters are their own movement.” That’s the mark of a man who has put himself in the minds of all those Others heckled by society, ironically not laughing AT them (which is what they think he’s doing), but actually helping to drive them to where they wanna go. 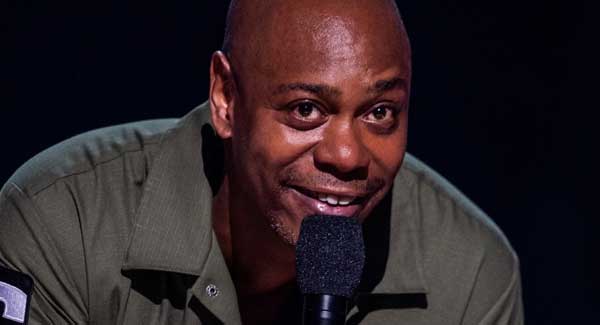 If you’re allowed to be a woman trapped in a man’s body, then Dave’s “a Chinese person trapped in a nigga’s body.” Makes total sense.

Then there’s the case of that French actor (as Dave pronounces it), “Juicy Smoll-ee-ay.” Juicy enters the narrative as a person who exploited the woke environment, only to have it backfire on him.

And there are the fallback faves: “Michael Jackson sucked my dick!” Dave pointing out that most people who got molested just ended up with awkward Thanksgivings, while a lucky few could say that, though they were molested – at least it was The King of Pop…

We used to think that comedians like Lenny, Carlin and Hicks (and now Chappelle) were the bomb-throwers; that they were the ones who might destroy society with their inciting observations on its foibles, indecencies and idiocies – but nowadays the people who cause the trouble are the histrionic Social Justice Whiners in the audience on a suicide mission. Destroying society from within. In throwing their bitch bombs, they are causing the destruction that they think they are trying to prevent.

But why pick on Dave? What about Bill Burr? What about Anthony Jeselnik? What about Chris Rock and Ricky Gervais? Biting comics like these are still addressing taboo subjects like rape, school shootings, pedophilic religion, incest and MeToo misogyny. It seems like the critics are picking on Dave for the same reason Dumbo Donald inserts himself into public conversations – fear of irrelevance. And they know they are guaranteed eyeballs and clicks if they attack the current King of Standup. Yes, they might be truly offended, but are they triggered by the social climate, or by the prosaic need to get views and likes and sponsors?

Directed by Stan Latham (director of all seven Chappelle’s Standup Specials), STICKS & STONES was shot in Atlanta Georgia during June 2019 and is Dave’s 5th Netflix production. In the trailer, Morgan Freeman narrates: “If you say anything – you risk everything.” Dave won’t be taken down anytime soon – his legacy looms too large. We can only hope that he is not deterred by the vocal minority of whiners, influencers and alphabet people, and that he will keep partying like it’s 1999…

On Netflix, if you let the Special run to the end, you will be treated to a 22 minute bonus feature, filmed in b/w (for maximum cred), where we see Dave at various venues during the leadup period to this Special, chatting with his audiences, taking questions, giving advice and generally doing Dave as only Dave can.

A prime story is Dave’s first meeting with Obama as a CANDIDATE, when there was a feeling in the air that anything was possible, when humanity was healing itself, when people could take a joke. And it is nostalgic to hear of these simpler times (just 10 years ago) when the term SJW either didn’t exist, or was in its infancy; back in those wondrous hope-filled days when a black man could actually become president.