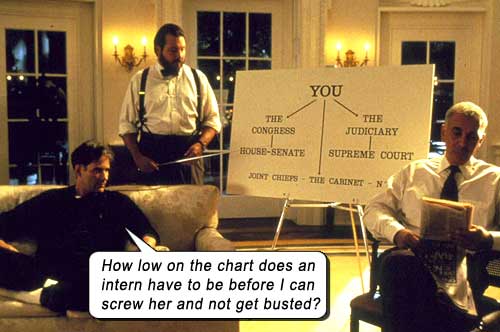 Rooted solidly in the “We Can Dream, Can’t We?” mold, DAVE follows the adventures of a stand-in for the American President who tries to rectify the administration’s shortcomings while “in office” – a grander fantasy than any cobbling from J.R.R. Tolkein.

Despite the hypocrisy in trying to retain democracy’s visage by inserting a lookalike into the Presidential post without an election, writer Gary Ross and director Ivan Reitman have crafted a pleasant enough diversion, DAVE’s excellent performances redeeming any conceptual constitutional glitches. 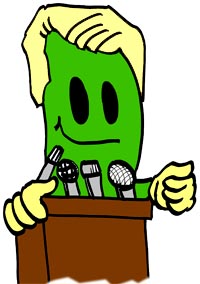 Kevin Kline is such a marvel in both roles – as the real American President, Bill Mitchell and as his temp agency doppelganger, affable Dave Kovic – that never for a moment do we doubt that he is, in fact, two different people. Even when both his personas are sharing the screen, one exudes the authority we would expect from a president, while one cows sheepishly in the face of that authority.

When Bill Mitchell suffers a stroke and goes into a coma (during a sexcapade with one of his secretaries), in order to keep the nation’s peace of mind, oily Chief Of Staff, Bob Alexander (Frank Langella) and his rationalizing apprentice, Alan Reed (Kevin Dunn), secretly hustle lookalike Dave into the President’s chair, crash-coaching him on public appearance and board meeting protocol. Alexander’s agenda is to puppet Dave into handing over the Presidency to him, but conscientious Dave, oblivious to Alexander’s machinations, sees an opportunity to “do some good” whilst ensconced in faux public office and (with the help of morose Charles Grodin – tautologous, I know) actually forges a more sturdy economic stance for America.

Sigourney Weaver, as Mitchell’s estranged wife, is thrown in to add unnecessary romantic subplot to an already-implausible story. (The day any First Lady divorces her President – keeping in mind that she not only divorces him, she divorces the life of unbridled enablement that comes with laying down with the Leader of the Free World – and shacks up with a temp agency staffer who can offer her a ten-year-old Lexus as her primary mode of transport, you might as well jump on that illegal schoolgirl you’ve had your eye on, for the Gates Of Hell are surely about to open and swallow humanity.)

Though the politics of President Mitchell and Dave Kovic are never mentioned outright, Mitchell was painted as a Republican, whilst Dave was noticeably fashioned after beloved Democrat Clinton. And in hindsight, this proved to be the funniest thing about Mitchell’s philandering, as it presaged Clinton’s Monica-gate by a couple of years.

The fact that the American populace can take the profligacy of the American Presidency for granted says something not about our vaunted “freedom,” but about our tolerance for mendacity. This society itself has set up nonsensical “rules” regarding marriage and fidelity, yet when demonstrated that those rules matter not, and that we can easily tolerate their infraction – even joke about it – what was the point of the rules (and their attendant penalties) in the first place? When an American President can perjure himself whilst simultaneously making us doubt exactly what “having sex” means, we have to ask ourselves, “Are we actually all virgins, then?”

A scenario like Bill Mitchell setting up a lookalike to press flesh so that he can be elsewhere spanking flesh needs no rationalization or justification, we are so inured to governmental duplicity of this sort. Though no textbooks would own up to it, we KNOW that the President obviously has a harem on call, and though the lookalike ploy may be a stretch in the Real World, we can be sure that a goodly percentage of his “business meetings” are spent releasing his pent-up, world-broiling stress into some tart vessel bent over backwards for her country.

Still, if this movie had been made before the Kennedy administration, someone would have been shot.

In not promoting partisanship, the movie tries to illustrate what any politician can do if he were to unselfishly actually serve his country instead of himself. Refrain: “We Can Dream, Can’t We?” This is the naïve failing of the film; though Dave retains the innocence that allows him to pull off his budget-balancing antics with sincerity, do the film-makers truly believe this movie will work one iota towards compelling a soul-blackened politician (of any party) to be unselfish?

Frank Langella is the only character even minimally portrayed as realistically as we know all politicians are, in their sin-charred, balrog hearts. Even the most beloved of statesmen (Kennedy, Jefferson, Roosevelt) are more likely to be tailored after the Frank Langella character than the Dave character, no matter what their public personas promoted.

A faltering resolution and hokey wrap-up ruins what little promise the movie glimmered with in its middle act. The scheming Chief Of Staff faces impeachment, the Vice-President (Ben Kingsley – wholly misused) is sworn in as President, and the temp agency guy gets the President’s ex-girl, a grand future of shopping at the 99c Store awaiting their low-income, patriotic selves…