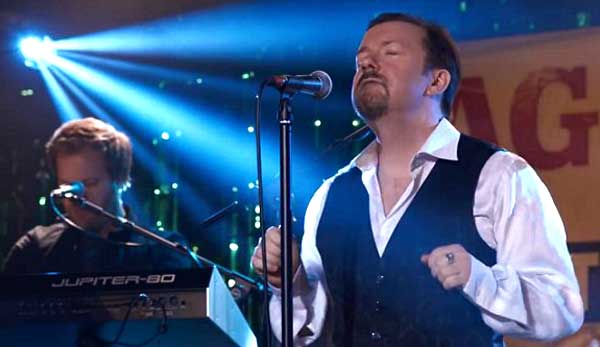 The loneliness of the long distance entertainer.

David Brent (Ricky Gervais), 15 years after leaving THE OFFICE, takes his self-financed band out on the road, for one last stab at “making it.” But, as one character laments, “he doesn’t really know what ‘it’ is.” DAVID BRENT: LIFE ON THE ROAD is a loving elegy for a much-loved character. But writer-director Gervais has himself forgotten why we loved the character, and this mockumentary comes off as just mocking.

First of all, let’s not forget that David Brent is a monster. In Gervais’s stellar 2000 comedy THE OFFICE (co-written/directed by Stephen Merchant), he made Brent a petty narcissist who was too self-centered to see that his every action was a cry for help. Due to the hook of that show being a film crew shooting “unscripted” footage for a proposed documentary, which resulted in endless foot-in-mouth scenarios, the blunt instrument that was David Brent was comedy gold. The beauty of that character was that he never did achieve redemption; he never realized he needed help, never apologized and never admitted defeat. Indeed, Brent ended Season One self-aggrandizing on how people would thank him for his largesse.

Now DAVID BRENT: LIFE ON THE ROAD is a problematic animal. Being a stand-alone feature film, it falls into the same trap as THE LEGO BATMAN MOVIE – creating a resolution for the damaged character at its center, a character that was chugging along just fine being damaged! Has Gervais been in Hollywood too long, conforming to that Screenplay-101 edict that every character must arc to be interesting? He should have kept Brent a monster, instead of wrap with a pat conclusion that undermines the character and the movie’s impact itself.

Mandeep Dhillon emulates a vanilla Dawn Tinsley, and Jo Hartley is here for romantic protocol, although there is nowhere nearly enough time to build any real chemistry between her and Brent.

Another inadvertent problem is that David Brent has become reality, with the election of Donald J. Trump to the presidency of the United States. Brent’s oblivious blowhard buffoon was hilarious on TV – a composite of every office boss we’ve ever known – but that creature of fantasy that was so laughable irking cubicle employees at the fictional Wernham Hogg Paper Company with his obliviousness is now doing it on a world scale, and the laughter has turned to shudders of horror. The fantasy concoction David Brent is reflecting the reality of Donald Trump: a pathetic man-child in a position of authority, whining for respect and pining for everyone to like him.

We meet Brent at his new job – a common salesman, not an office manager. He’s still the same larrikin, aching for acceptance by cracking jokes and intruding on people’s personal space with inappropriate comments, but his fellow cubicle workers are far less tolerant with his antics than his Wernham Hogg compatriots. Due to all his jokes falling flat (except with one employee, Tom Bennett, who is an obvious composite of Tim Canterbury and Gareth Keenan), Brent now breaks into a nervous little laugh/sigh after almost every sentence, that makes us cringe for the wrong reasons. 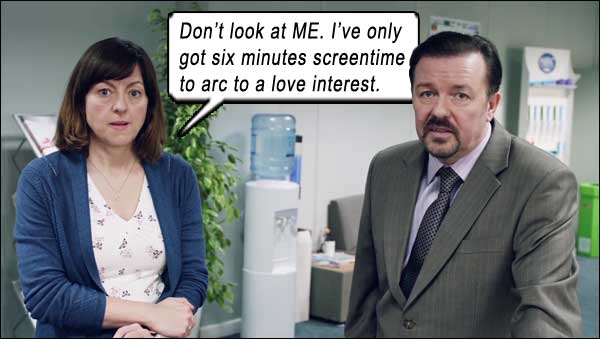 A camera crew is tailing Brent because he intends to take a band out on the road and make a documentary about it. (God knows why he would either hire a production crew or allow one to shadow him, after the debacle of his previous documentary, THE OFFICE. That is, though THE OFFICE was a spectacular comedy from our real world perspective, in the world that Brent inhabited, it made him look like a right tosspot.)

No time to question veracity, as David quickly learns he has to take unpaid leave to put his band, Foregone Conclusion, on the road, that he can’t get enough dates in one concentrated area to book more than a handful of shows, that he is spending unnecessary money on hotel rooms when the “tour” hits cities that are literally minutes away from his house, that he himself can’t fit on the luxury tour bus that he hired for the band and must tag along behind it in his car, and that no record companies will agree to come see him, let alone sign him to rescue him from a lifetime of cubicle hell.

Foregone Conclusion consists of Andy Burrows, Steve Clarke, Michael Clarke and Stuart Wilkinson, with Doc Brown as Dom Johnson, a young black rapper whom Brent decided to “manage,” investing money into studio time for Dom, which turned into studio time for Brent’s band. Tom Basden is along as engineer.

The grandest irony is that Gervais actually did pursue a “rock star” career in the mid-eighties, most notably in a New Romantic band called Seona Dancing. A skinny, handsome Ricky sang and performed like Bowie meets LeBon meets Spandau in urgent trousers. Now we know Gervais as the plump edgy comedian, but somewhere along the way, his eye turned from music to comedy, and I would love to see that transitioning Gervais – not quite Duran, not quite Carlin, but a bridge across both. (Are there any YouTubes out there that can dredge up this moment in history?) He somehow found he could meld his comedy and music with Brent in THE OFFICE, making Brent a former bandguy who had strived for fame and ended up at Wernham Hogg, sometimes breaking out his acoustic guitar to serenade the employees against their will.

So due to his actual rock background, this is one aspect Gervais gets right in this film – the band stuff. Though they play basic, middle-of-the-road rock, they do it well, and the mix and audio and playing are all pretty authentic for a tight band that is somewhat dated and bland. The small things like studio environments, engineers, lighting, band dynamics, won’t cause a real musician to cringe. Brent’s vocals are in tune and his lyrics are the comedic sell. Of course they are not done with comedic intent; rather, Brent sincerely believes he is an “important” songwriter, delving into social issues like the Native Americans (who “sit like pelicans”) and dwarfs (“they’re not children”).

Besides a little source music, all the music you hear is written by Gervais-as-Brent, which is an accomplishment, no matter how you might view the songs. For a touch of connectivity, we hear a sad few bars of Mike D’abo’s Handbags and Gladrags, the outro theme of THE OFFICE, as Brent almost recalcitrantly steps out of his office to start the tour…

There is one laugh-out-loud moment, when Brent, drunk, is being helped down a hotel corridor by Dom, his “black friend,” and keeps blurting, “You’re my nigger,” to Dom’s chagrin.

One of the many disconnects in this film is how his hired band treat him – with open disdain. Speaking from experience, when I’ve been stuck in a band as a hired gun with an artist who is clearly mentally unstable, yet paying you to do a job, you and the band laugh at his jokes, play his dull music, wear the stupid clothes he pays you to wear, and then go have a beer and laugh about him behind his back. You would never wear long faces and mope around as if he were toxic in front of him.

There is a moment where Brent asks the band to have a drink with him, and they make the point, “He pays us to play and rehearse, but our free time is our own.” This is exactly right. (Again, Gervais has captured the session musician ethos.) But when Brent pays them to have a beer as well, they all sit around silent, instead of pandering to his ego, or even just talking amongst themselves. Thus, the film plays like an episode of that old British sitcom SOME MOTHERS DO ‘AVE ‘EM, where everyone around Michael Crawford’s effeminate, bungling Frank Spencer were openly malicious directly to his face, contrary to any kind of social reality. In that sitcom, the constant impatience and malice wore thin fast, and in this movie format, ostensibly a documentary rooted in real life, it wears thin even faster. Which calls into question how the resolution – of everyone reconciling with Brent – could possibly be accepted as a viable, believable denouement.

“Like some new romantic looking for a TV sound…”