Die! And don’t come back!

Poff of the Dead
(now in color!)

DAWN OF THE DEAD is supposedly a great film. I really tried to see what made it so. I took all the right drugs and bribed all the right congressmen. I psychoanalyzed it until the blood rushed to my little green brain and made jelly beans… but there is no excuse for DAWN OF THE DEAD to exist. Like its subject matter, it is a stinking corpse – yet it still walks.

Made as a kind of follow up to his bad zombie movie of a decade earlier, NIGHT OF THE LIVING DEAD (1968), Romero’s DAWN OF THE DEAD is actually worse. Ten years, the man learns nothing!

Romero: “I always used to say that I’d rather have 100 bad shots than ten that are beautiful.” Well, you got it.

In DAWN, a zombie epidemic forces four survivors to join forces and hole up in a shopping mall to fight off the zombies and then eke out a secluded existence with the mall’s resources: Philadelphia SWAT guys, Peter (Ken Foree) and Roger (Scott H. Reiniger), TV reporter Francine (Gaylen Ross) and her chopper pilot mannequin boyfriend Stephen (David Emge).

How do we tell the difference between the zombies and the actors? Well, the zombies can act.

As an indication of just how undeserving these people are at being called actors, one glance at their resumés over the past 30 years should tell us everything:

♦ Ken Foree – since 1978, about 70 TV appearances, also appearing in 2004’s remake. Foree was the only person with any commitment on the set (intermittently, at least), and it reflects in his resumé. He really wanted to be an actor – but was only good enough for TV.

♦ Gaylen Ross – since 1978, made 2 movies and 1 TV appearance. She worked as a director on a clutch of films (which is commendable, and further proves the point that she was no actor). In signing DAWN OF THE DEAD posters at horror conventions, she displays a level of shame lower than the level of discernment of the fans who seek her autograph.

Every scene illustrates the embarrassing failure of this movie’s credibility, but I need only describe one: Francine stands five feet away from Stephen, who grapples with a zombie. He shouts at her to run – but there’s a zombie fifty feet away, shambling slowly toward her blocking her path. It’s fifty feet away. In an open field. Shambling so fast it might reach her by christmas next year. She “indicates” that she’s worried. Because Stephen is grappling with that zombie five feet away and she can’t help him because she’s a woman and stuff. Closeup of Francine worried. Cutaway to zombie fifty feet away, shambling, blocking her path; in a 360-degree open field; the horror is that she only has 359 degrees to thread the needle and escape that zombie. She tries to help her man by watching him intently, but that doesn’t work, so she tries to indicate some more that she’s faced with a conundrum of how to dodge the zombie fifty feet away – oh, hang on, it’s forty-nine feet away now. The terror is so unbearable, it’s bearable.

Stephen overcomes his zombie and grabs Francine and drags her to safety. She is, after all, blond, and can’t be expected to escape from zombies without tripping, screaming irritatingly or getting killed in her bra and panties.

Here’s the punchline, folks: as soon as bad actor Stephen gets dork Francine to safety – she starts bitching about equal rights in making decisions!

To prove her equality with the male gender, when zombies break in, Francine stands and screams irritatingly until a man has to come over and kill them for her.

Peter, the big black SWAT guy, explains the zombie holocaust: his granddad was a priest in Trinidad who used to say, “When there’s no more room in hell, the dead will walk the Earth.” So coming from a priest, it MUST be true. No matter that priests should have the lowest credibility on Earth for subscribing to supernatural idiocy in the first place as if it was truth… So there’s no more room in hell, huh? I guess that proves how piggish the human race is – we’ve filled it up with ourselves. Guess God was too weak for the devil after all, huh?… 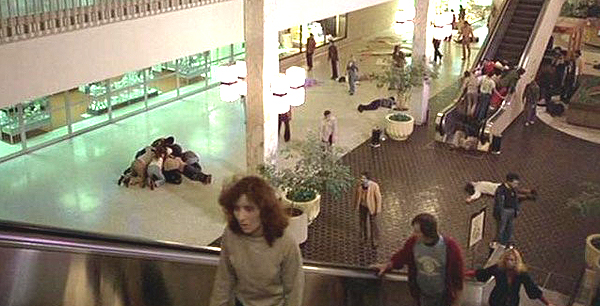 Just another slow Wednesday night at the mall.

DAWN OF THE DEAD is an embarrassment to fans of good moviemaking and to horror movie fans. The fact that people laud it as some kind of benchmark is more a testament to the sheep mentality of all you humans who are going to fill up hell than the quality of the movie.

Again with the excuses: “It was good for its day.” What’s that supposed to mean, when other people in other films were ACTING in 1978? People in GREASE, and TAXI DRIVER, THE BOYS FROM BRAZIL, THE DEER HUNTER… Or what about horror movies of “its day”: THE OMEN in 1976, THE EXORCIST in 1973.

Just when we think the movie can’t get any worse, bikers arrive at the mall, led by Tom Savini. And – impossibly – the movie gets stupider!

The zombies are not the subject any more, as the bikers fool with them, throw custard pies at them, kick them over, chop off their limbs, etc. So Stephen starts shooting at the bikers for availing themselves of all the mall resources that up till now, only Stephen and his pals were stealing.

I read some outlandish commentary on DAWN that proposed Romero was trying to illustrate the difference between stealing for necessity (our heroes) and stealing for fun (the bikers) – but, besides the fact that the bikers are also stealing for necessity (in a society that has alienated them through disparity of wealth), Romero was not making any such commentary. He was merely trying to kick out the jams after planting our heroes in a rut of super delicious ultra boredom.

The deaths of some of our heroes are funnier than their misbegotten acting performances could ever be. But that’s okay, cos they come back to life anyway, cos hell is full, see.

Acting Hell can’t be full yet though, cos none of their acting careers ever came back to life…