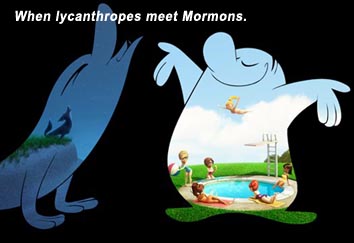 DAY AND NIGHT is classic, old-school cartooning at its best; not just the expressive, hilarious drawings, but the ideas behind them – and within them!

A short film before TOY STORY 3, this inventive little tale follows a “day person” and a “night person” as they clash in misunderstanding of each other. They are both merely cartoon outlines, and within them are visuals that inform their moods and actions, Day featuring daylight scenes, Night featuring night scenes.

Written and directed by Teddy Newton, how does one even describe this idea from scratch, let alone transfer it to the screen with such flair and dynamism? Not one word is spoken by the cartoon guys (the only dialog is a radio broadcast), as they look upon each others’ pliable, formless (nude?) bodies, yet the message comes through loud and clear; tolerance, learning to appreciate and enjoy each others’ differences.

Pixar, of course; the kings of originality and quality in a world gone putrid with homogeneity and mediocrity.