Keanu Reeves elevates his One Facial Expression Method to new levels of expressionlessness in this wooden remake of the 1951 film. 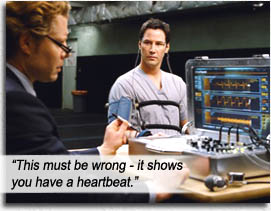 Though excellent concepts are broached in both THE DAY THE EARTH STOOD STILL films (1951 and 2008 versions), both films are ruined by their gutless denouements, failing to follow through on their stances of the human race not being worthy of continuing existence.In 1951, Michael Rennie, as alien Klaatu, landed in Washington in a glowing cardboard flying saucer; in 2008, a gaunt Keanu Reeves is Klaatu (which in alien language means, “OMG, he’s sexy AND mysterious!”), who lands in Manhattan in a spectacularly-visualized translucent sphere. Upon exiting his vehicle, he is shot, which precipitates the appearance of his bodyguard, Gort.

In 1951, mechanical man Gort was a foam rubber, eight-foot automaton who dumpled from side to side like a mummy – nothing you couldn’t outrun or outlaugh; in 2008, Gort thunders out as a 50-foot war machine, black metallic steel-flecked texture, Iron-Man-meets-the-Balrog, super conductive, super destructive.

Yes, the “effects” of 2008 elevate this movie above the original, as does the updating of social mores, better acting and “realism” – but let’s not talk of “realism” for either movie, as the English-speaking, oxygen-breathing, bipedal, humanoid, physics-bending Klaatu contravenes any discussion – suffice to say, 2008’s remake is not as cringe-inducing or naive as the 1951 original. The intriguing first act, fraught with scientific exposition, is where this EARTH STOOD STILL shines.

It keeps shining through the somber exchange between Klaatu and presidential spokeswoman, Regina Jackson (Kathy Bates), understating the superiority of unknown worlds beautifully:

Klaatu: Do you speak for the entire human race?
Jackson: I speak for the president of the United States. Now please tell me: Why have you come to our planet?
Klaatu: ‘Your’ planet?
Jackson: Yes, this is our planet.
Klaatu: No. It is not.

That’s where Monty Python steps in – Helen takes Klaatu to visit John Cleese (in an excellent cameo as The Smartest Man in the World – sounds like a Python sketch, doesn’t it?), who argues against humanity’s destruction by imploring Klaatu, “At the precipice, we change.” (Both John Cleese and Gort have way too little screentime.)

‘Scuse me while I kiss the sky… and vomit.

You egregious wimps! Just once I’d like to see humans pay for their pompous arrogance! But how’s that going to happen when humans make the films?

In 1951, Michael Rennie very clearly said: “it is no concern of ours how you run your own planet, but if you threaten to extend your violence, this Earth of yours will be reduced to a burned out cinder.” Which means: only when Earth extends its belligerence off-planet will those “intergalactic police” step in and bring peace by… er, force.

In 2008, Klaatu’s intergalactic police are simply whining greenies, even though the ORIGINAL message could have served more potently in this age of human intergalactic endeavors (with our spaceships, probes, and terraforming equipment being sent to the planets, stars and other galaxies).

Instead, all the translucent globes that land serve as “arks,” transporting animals off-planet. Whereupon the plan is to then decimate the Earth, including humankind. What kind of a fertile land will that leave behind for the animals to return to? Not sure – but I do know that Jennifer Connelly could use my anal-probe.

Gort (whose ker-ray-zee 1950s-monster-name is a “scientific” acronym in the remake: Genetically Organized Robot Technology) disintegrates into trillions of little CGI insectoids who ravage the landscape, decimating cities like locusts. How can Klaatu-Keanu say the human race is “killing the planet,” with a straight face when Gort’s insectoids are doing the same thing? (Well, I guess when you don’t have facial acting muscles, you can say anything with a straight face…) And why are they eating buildings anyway? Giants Stadium is not “the human species” – but it makes for a spanky movie trailer.

To cap off the gutlessness and stupidity, Kleaanu has his “humans are a noble species” epiphany – as we knew he would – and sends out an electromagnetic pulse (we presume) that destroys the insectoids and brings on “the day the earth stood still” as it cuts all electricity, stops all traffic, boats, factories, etc. And lets the humans live. As he rises quietly into the cosmos to go green up another bunch of dweebs.

It is amazing the same paranoia exists in 2008 as it did in 1951; call it Cold War, call it Terrorism, the human species still trembles like lemmings at anything remotely “alien” – the opening scenes where the army surrounds Klaatu’s spaceship read exactly the same in both movies: grunts with itchy trigger fingers, supposedly the toughest humans on the planet, brown their panties at the first sign of “different” and start shooting arbitrarily. Then when the alien reacts in self-defense, the army accuses the aliens of attacking first. Sound familiar?

People consider the 1951 version “revolutionary” for its message. It is not – every ’50’s B-movie during the Atomic Age/Cold War soapboxed about “The decision of destruction or salvation rests with humans themselves.” Likewise, this 2008 version is as gutlessly pc as any prominent fad media these days soapboxing on “green or die.” As the ’50’s had to include their movie staple of Alien Carrying Earth Woman, the ’08 bows to its New Staples of the green message, American firepower coupled with inferiority complex, and annoying insectoid CGI (how many modern movies contain CGI insectoids for no reason? KONG 2005, CLOVERFIELD, LOST IN SPACE).

As for the boy of wood who somehow made a career out of “acting” – Keanu – one person will not be laughing at him. Pinocchio.