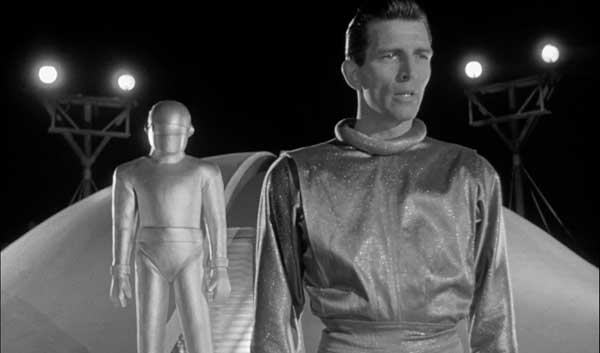 Ziggy played for time / Jiving us that we were voodoo…

The Film that Moved the Earth.

In 1951, in the shadow of the Cold War, in the grip of McCarthyism, as America slid into the Atomic Age, THE DAY THE EARTH STOOD STILL was just another stanky B-Movie science fiction thriller with a sanctimonious message of the human race on the edge of doom. Somehow, it rose above the engine pit and is now regarded as a classic.

A spaceship (nee, “flying saucer”) lands in Washington amidst widespread dismay and theramins twoinging. Two alien beings emerge, Klaatu (Michael Rennie, doing his Charlton Heston Lite) and Gort (played by tall Lock Martin), an eight-foot metal robot (who looks suspiciously like foam rubber). Klaatu’s message to Earth is simple: “it is no concern of ours how you run your own planet, but if you threaten to extend your violence, this Earth of yours will be reduced to a burned out cinder.”

Klaatu’s message is only delivered in the last five minutes of the movie, where we discover there is life on many other worlds and that Klaatu’s race regard themselves as police of the cosmos, sending out their metal foam rubber drogues like Gort, who “at the first sign of violence, act automatically against the aggressor.”

Though there are many unintentional Christ allegories throughout this tale – Klaatu’s message of peace; Klaatu going undercover as “Mr. Carpenter”; Klaatu dying and being “resurrected” by Gort – this Orwellian dance of paradoxy was not one of them. The main question raised when a civilization is forced into behaving under threat of obliteration is the same question I always ponder of this civilization and, in particular, religions that threaten damnation: Would you behave if there was NO threat? And what does this say about your vaunted “goodness” if it is only to avoid penalty or hell or jail or Klaatu?

Directed by Robert Wise (who would go on to direct THE SOUND OF MUSIC, 1965, and STAR TREK: THE MOTION PICTURE, 1979), I think what set this movie apart from the hundreds of 1950s atomic-themed B-fiascos that ended with the caveat “The decision rests with you” is the non-provincial nature of Klaatu’s message. Klaatu insists he will NOT meet with any world leader exclusively; that includes the president of the United States. Of course, this “insult” twists the narcissistic panties of America, but widens the audience for the film. Eventually, Klaatu decides to meet “intelligent” people – all the scientists he can muster. To prove his power, to bring them to the table, he makes the Earth “stand still” – stops everything electric, stops all the traffic in the streets, the trains on their tracks, yet keeps hospitals and necessities running. We never find out how Klaatu makes the Earth stand still, but we figure it has something to do with him being wicked at algebra.

Klaatu’s objectivity in NOT singling out America as the Earth’s spokespeople elevated the film’s message and struck that “classic” world chord.

Unfortunately, THE DAY THE EARTH STOOD STILL has not dated well (which is why, I presume, some meathead felt the need to remake it in 2008. But that’s another tale…) Social morés and filmic techniques have progressed so far that the film’s old-world execution and 1950 Amish mentality is cringeworthy.

I urge you – like I urged the KING KONG 1933 retroheads – to rewatch the film, but hold onto your… hats – This movie is from a time when white men wore hats more religiously than Jews wear yamulkes; from an age when the pointy bra was the weapon of choice for single women; when rear projection was the new CGI; when dating couples in their 40s were considered “crazy kids in love”; when everyone addressed each Mr and Mrs and kept their ties tight and girdles tighter to deter the opposite sex from unholy acts of bad thoughts; when the military protected a spaceship landing field with two inept guards; when people clustered around the radio for their news, drove cars as big as boats, lathered Brylcreem through their hair (to keep their hats on?) and wore their pants so high it chafed their nipples… it would be hideous kinky if it wasn’t so unwatchable cringy…

Two doctors (at Walter Reed military hospital, no less) marvel at Klaatu’s life expectancy being 130, because his “medicine is that much more advanced” – but medicine has nothing to do with life span! How do you account for the one-afternoon life span of a mayfly compared to the century-span of a tortoise? It’s not the superior medical program tortoises have over humans, doctor geniuses – it’s called METABOLISM. Discussing life expectancy while lighting up cigarettes! Then another doctor, befuddled at Klaatu’s healing salve, laments, “I don’t know whether to just get drunk or give up the practice of medicine.” Those are the only two options? Nothing’s changed at Walter Reed…

And – in that Golden Age of Superheroes (1938-1950s) – Gort’s fashion statement of tiny metal superhero undies over his metal spandex leggings does not go unnoticed. By female metal men with severe girdles and pointy bras.

In one of the inanest scenes this side of THIS ISLAND EARTH (1955), Gort carries the “love interest” (Patricia Neal, who shows no “love” – not even to her 45-year-old “boyfriend,” Hugh Marlowe – and therefore holds none of our interest) into Klaatu’s spaceship. She fulfills no function within, does nothing to further the plot, doesn’t even get anal-probed (which would have loosened that girdle enough for a man to get a finger under that pointy bra with a chisel), and simply walks out later, unconcerned. We realize Gort’s act was simply to comply with 1950s film poster protocol of Alien Carrying Earth Woman. Poster achieved. Back to the kitchen, woman!

Judge this film not on its superficial message (preachy messages of doom were a staple of 1950s sci-fi cinema); judge it not on its “timeliness” (there is always the threat of unmanageable war – we’re looking at you, Dubya!); judge it on the one point that even Roger Ebert misunderstood: that humans killing each other does not concern the cosmos, but that if our weapons were turned outwards, it WOULD concern other life forms. THAT – is a message for generations. THAT – is why this film is a classic, even if most humans are too provincial to comprehend the concept and even if the film doesn’t quite understand what it’s talking about itself, humans not having conquered space yet at the film’s release.

On the one question which the film should have easily disqualified – the question of deities – the film-makers bowed to gutless studio standards. When the shot Klaatu is resurrected (the blood on his jacket looking like tomato sauce even in black and white), he explains his “born again” state, and makes about as much sense as any religion: “Only the Almighty Spirit has power over life and death” …You mean there IS a god, overseeing all the alien worlds and taking their weird-looking spirit forms up unto his capacious bosom?