Imagine a world where the vampires won. They’ve taken over. Everything. They have overrun every facet of “normal” society. Except they are the normals now: the corporate executives, the managers, the laborers and cubicles, the military and infrastructure; they work in supermarkets, in advertising, in agriculture; they are the cops, the criminals and the citizens. They are in the world as we are now, going to jobs in the hive of cities, being assaulted by advertising, raising families in the drone of suburbia. Except they’re vampires. They have been so successful that humans are almost extinct, which means that human blood – their food – is in short supply.

Such is the setup in DAYBREAKERS. Written and directed by The Spierig Brothers (Michael and Peter), it’s an intriguing twist to the jaded old lore. 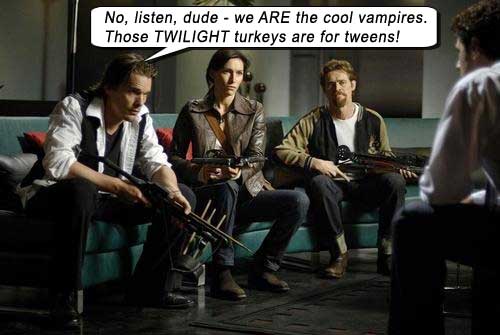 Vampire scientists are trying to find a blood substitute for human blood, before the harvested supplies run out – humans kept restrained in rows by the thousands, hooked to machines that drain their blood yet keep them alive to continue producing it.

Ethan Hawke is Edward Dalton, one such hematologist, working for a corporation run by Charles Bromley (Sam Neill). Dalton is unhappy at being a vampire (you could call him a human sympathizer), trudging through his existence day-in day-out doing the job he did before he was bitten, which now is being done to serve his vampire cause.

Authentic human blood is a delicacy, and expensive, and though most vampires are content with the blood substitute (that Dalton is always trying to refine), there are a select few who partake only of the real nectar – like executive Bromley. Thus – the startling, ironic plot point – Bromley proposes that Dalton starts breeding humans, wishing them to “multiply again” in order to feed off them without constriction! Which repulses Dalton.

Those that use too much of the substitute without an occasional dose of the real thing turn into “monsters” (resembling Gary Oldman’s man-bat in BRAM STOKER’S DRACULA). So there is a vested interest in Dalton finding a solution, or having to out-act Gary, or worse. Then – in a snatch of auburn hair and Famke Janssen lookalike who seems more attainable than the real thing – Dalton’s devil prayers are answered, in the most contrary way.

Australian Claudia Karvan is Audrey (Famke Lite), who knows how to turn vampires back to humans. And she needs Dalton’s help…

Famke Jnr. pulls the sexiest move, when she asks the weakening Dalton, “Remember the last time you drank human blood?” and cuts her hand into a cup for him, to sustain him while they experiment on changing him back.

Dalton successfully regains his humanity, and then it’s onto the third act shooting and punching to bring down the corporate vampires. No, not Mitt Romney’s Bain Corporation – the literal corporate vampires. And in the end, our heroes ride off into the sun…RISE.

DAYBREAKERS introduces many new and interesting twists to vampire canon, however the merely adequate filmmaking and production values leave us nothing to sink our teeth into. (Somebody slap me.)