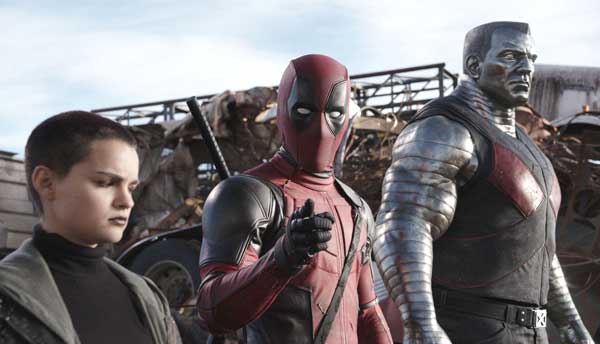 “Kids, if you’re watching this – I’m pretty sure your parents are neglecting you…”

Grabbing Them By The Pussy.

It is such a satisfying superhero movie because it has done what all mainstream superhero movies should have done since the advent of the indie-dark KICK-ASS (2010) – go R-rated. We’re all adults here. Treat us as such.

Ryan Reynolds is Deadpool, given all the leeway to fully express the katana-wielding assassin like the turgid erection he aspires to be. He’ll be the first to tell you, as he breaks the fourth wall within the fourth wall (“that’s like, sixteen walls”), he’s no superhero. And this is not a superhero movie. It’s comedy mixed like a blood bile bath with gore-filled action sequences and a vicious stream of meta-sarcasm. 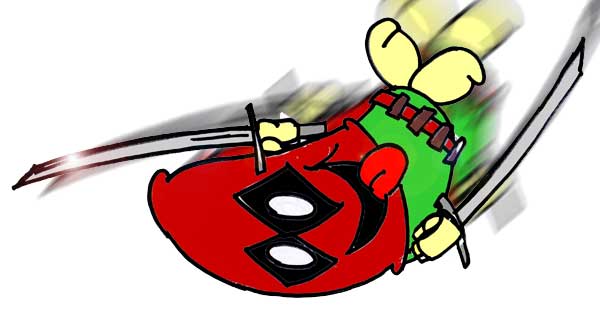 Deadpool is not here to clean up crime in the city – hell, he’s not even here to clean up his own house – look at that crack palace he hangs in with that blind lady (Leslie Uggams). Deadpool’s existence is solely for the purpose of revenge on the man who imbued him with the very “powers” that make him resemble a superhero (no pain factor, super healing factor, enhanced reflexes – and apparently great tailoring skills as well. How do all these super dupes suddenly gain the expertise to manipulate a sewing machine?). It was the method and intent by which the sadistic Ajax (Ed Skrein) endowed him those powers – via torture, to create a super slave – that really dicks Deadpool off.

Written by Rhett Reese and Paul Wernick (ZOMBIELAND), more than the first half of the film is constructed as a brutal action sequence interwoven with flashbacks, Deadpool bringing us up to speed on his origin tale superbly, without us feeling we’ve wasted time watching a boy’s parents get shot outside a theater again. He was once Wade Wilson, just your average everyday small-time mercenary, with a taste for alcohol, ultra-violence and the occasional hooker; at the local merc pub, his bartender pal and comic relief, Weasel (T.J. Miller), would place Wade at the top of the pub’s “dead pool” to benefit from his imminent death. 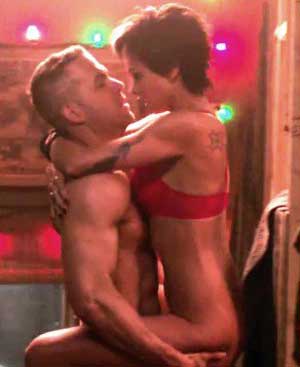 The MPAA mind at work: We can show a person sawing off his hand, being stabbed in the head and shooting others point-blank in the face, but we can’t show a woman’s tits because – the children!

Wade finds, falls for, and power-sexes Vanessa, the uncharacteristically articulate prostitute (Morena Baccarin, getting pounded the way she should have been pounded by Nathan Fillion), until Wade finds out he has cancer of the Everything. A shadowy gubmint agent offers him an underground cure, which he accepts, abandoning Vanessa. But the cure is the curse, mutating his cells so that he looks like “an avocado that had sex with an older, more disgusting avocado – not gently – like it was hate-fucking; like there was something wrong with the relationship…”

From its opening titles, we see how far past the fourth wall the film intends to push: As a camera glides between the frozen-onscreen mayhem, the titles float past: “Starring God’s Perfect Idiot, A Hot Chick, A British Villain…” Within this maze of visuals, the pissing on conventions: we see a People Magazine featuring Reynolds as Sexiest Man Alive, a wallet pic of him as Green Lantern; later, a magazine featuring Hugh Jackman in the same title…

Brianna Hildebrand is “A Moody Chick” (one of the two X-Men who cameo here, aka Negasonic Teenage Warhead—waitaminute! Now they’re just making shit up, right? I know I haven’t followed X-Men comics for awhile, but is this even a thing?); Stefan Kapicic voices “A CGI Character” (the very Russian X-Man Cyclops, all steel, all the time); Gina Carano is “less angry Rosie O’Donnell,” right-hand-tran to Ajax. And Stan Lee is “A Gratuitous Cameo.”

The credits continue: Produced by Asshats, Written by The Real Heroes Here (refreshing that the writers are given the most credit for once!), and Directed by An Overpaid Tool. Although, first-time director Tim Miller is worth every penny. I guess for this experiment to be greenlighted, it needed the hand of someone with nothing to lose…

“Whose balls did I have to fondle to get my own movie?” says Deadpool to the camera. The relentless stream of insults and cultural refs reminds us of a live-action version of ROBOT CHICKEN. There is even a nod to the stitched-mouth version of Deadpool that Marvel messed up in WOLVERINE ORIGINS. And there is that cute cartoon of himself that he draws. Outro credits show another cute cartoon Mr. Pool lazily blowin’ a sax… 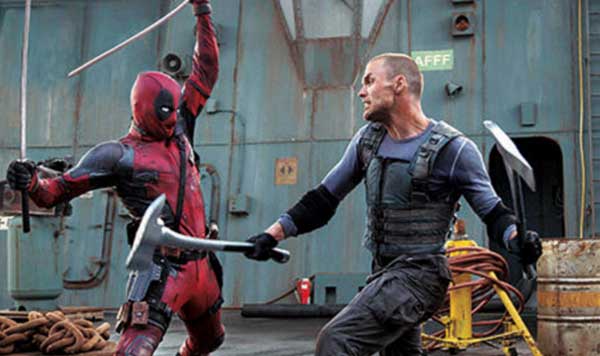 No one AXED you!

Crazily, the filmmakers manage to retain that tongue-in-ass-cheek tone and snappy dialogue, throughout even the most serious and psychologically painful moments of the film. And, most importantly, having this disturbing mélange succeed at the box office despite its R-rating. For this reason alone – not for its artistic stance, detailed production values or passé swearing – DEADPOOL will become a pioneering film, emboldening future filmmakers to raise the maturity level of a genre of films still regarded as the province of kiddies. DC’s post-DARK KNIGHT films are on that cusp, while Marvel – though the dick-punch behind DEADPOOL – still seem hesitant to commit to darker fare.

Ultimately, DEADPOOL falls to the convention of guys punching each other, albeit with more gore and wit, and the damsel needs saving and the bad guy needs killing because he’s unrepentant, and a monolithic structure has to be annihilated during the finale, with gigantic Pretty Orange Explosions, and the ignorant MPAA censors become so confused over their own contradictory edicts that they let this movie about a sociopath with no redeeming qualities slide because he narrates something remotely like a platitude during the final camera pullout.