What foul transgression did humankind perpetrate to deserve this accursed movie? For surely it is your undying wrath that allows such offal from the buttocks of Lucifer. 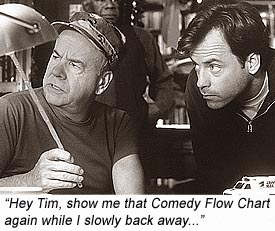 Dear God, Why give Greg Kinnear such an august kickstart into the A-List with SABRINA only to snatch away his momentum with DEAR GOD?

Dear God, Why allow Warren Leight to pen this tale about Tom Turner (Kinnear), a con man who is ordered by the court to get a job or go to jail, who ends up in the Dead Letter Department of the Post Office, with letters addressed to Santa Claus, Easter Bunny and you?

Dear God, You’re aware the plot calls for Turner and the Dead Letter Dept to start answering letters to God, granting people’s requests for pets at an old folks home, a mother who just wants a day off from taking care of her twins, saving a man about to drown himself (Jack Klugman – very sad to see this great character actor so old that his voice is a hoarse croak), and other ridiculous contrivances.

Dear God, Maybe it was you who planted the uncharacteristic humanitarianism in the Dead Letter Dept, who are usually content to make a living sitting on their arses and sorting letters to mythical beings, but please tell me you didn’t make the laity so stupid that they would actually write a letter to God requesting things they could have easily received by writing to the correct Earthly department.

Dear God, How could you abandon your child of charm, Kinnear, amongst Philistines like Laurie Metcalf, Hector Elizondo and the once-hilarious Tim Conway (who is obviously still recovering from that operation of having his funny bone removed)?

Dear God, We know you work in mysterious ways (which is just an invented excuse by people who know you don’t exist), yet we pray that you smite this movie like you smote the Canaanites at the Battle of Jericho.