Dear John, I never want to see you again.

Who knew dating was so frickin’ BORING?!

DEAR JON is a weepy date movie, where army guy Brick Rockchest (Channing Tatum, champion mumbler) meets beach chick Blondie Cocktease (Amanda Seyfried) and they bore us going on talk-dates. Then they get caught in the rain and kiss. Then they have a beach montage. Weepy-date-movie tropes fly at us like carnival balls thrown at target booths, to win your date a giant teddy bear that serves no purpose other than to block out thoughts of her previous boyfriends with its manifest presence. 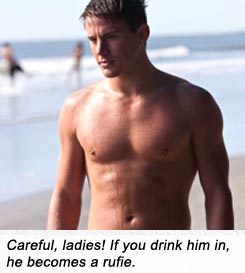 Then Blondie accidentally calls Brick’s dad (Richard Jenkins) a retard, which precipitates the Second Act Breakup. But they make up quicksmart, so that when Brick gets called back to military service they can both be feeling that Love Pain in their groins.

Brick is sent to Libya, or Iraq, or Pakistan, or some other place that America is sticking its military nose into for no good reason, and we are assaulted and battered with a soppy montage of Blondie and Brick sending each other letters and reading them in voiceover. She calls him “Dear John” in the letters to comply with the movie title.

Cue 9-11. So Brick signs up to Fight Them Over There. And Blondie begs him not to go – even though the American ethos demands that she bless his stupid little revenge volunteerism. He cries and says he needs her to tell him what he should do. Oh, a 90’s Man. It gets him a sex montage with good production values (i.e. we can’t see anything and there’s no actual pumping motions).

The most authentic moments in this film are between Brick and his mildly autistic dad. Very poignant, but it’s too little too late.

Brick is in some sandblasted desert when he receives the REAL Dear John letter. And burns all her letters. Girlies in audience weeping like marmosets.

Blondie has married Cancerboy (Henry Thomas). Yeah, that’s right, not only does this movie hit every weepy-date-movie trope imaginable, it even stoops to giving characters cancer, so that Blondie can marry (which is a tragic turn in our weepy-date-movie flow chart) and then Cancerboy can conveniently die (bad for him, good for flow chart), and the movie can close with Blondie wrapping her thighs around Brick again.

I wept all the way through DEAR JOHN, because I was so happy that an army caveman like Brick could read and write.

COMPLAINT DEPARTMENT
When you Google the classic rock cover band DEAR JON, this stupid movie sucks all the oxygen out of the web. If you were misdirected here by mistake, here is the REAL Dear Jon site: DearJon.us