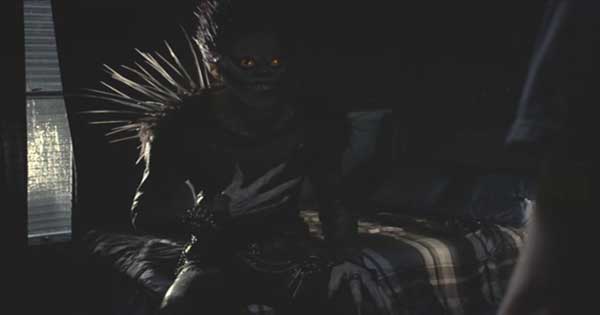 “And I will terrorize you until—wait, stop laughing–“

Can a demon really be scary if it has a name and speaks English? And sounds like Willem Dafoe? I mean, really, if a demon terrorized me with that voice that sounds like he’s biting a teacup in half, first thing I’d do is laugh. Then – maybe terrorized.

I’ve always said, entities that you cannot communicate with are infinitely scarier. Think: lion. Though it is of this world, and built with the same DNA as we cucumbers, there is no way you can “reason” your way out of being destroyed by a lion, in a manner much more horrific than being dragged to hell. You will watch your own intestines explode out of your midriff as it swipes its claws across your torso, and you will be conscious as you watch your innards being consumed, while falling into circulatory shock as your blood finds no pressure to pump against, due to your opened arteries. See? Miles more terrifying than a demon with glowing eyes, whose body type is quite humanoid except for the spikes on his back, using an American vernacular with a propensity for laughing at your discomfiture in all the right places, i.e. we are familiar with his speech patterns and with the guffawing villain trope, so the demon is not presenting anything “alien” to our senses; also, he corrects you in the pronunciation of his name, so there’s some kind of ego there as well, which means, if you can exploit those weaknesses, you’re home free…

So movies like DEATH NOTE lose me from the outset, with that baseline concept of making a supposedly otherworldly being quite worldly and tangible and comprehensible. But onward…

The demon is Ryuk (pronounced “Ree-yook” as per Ryuk himself, voiced by Dafoe), and he appears to womanly college boy Light Turner (Nat Wollf), after bequeathing him a book, in which you can write someone’s name and the manner of their death, and it will come to pass. What Light does with this power is the interesting progression of the story; how he first keeps it straightforward and small – killing his bullies at school, then the murderer of his mother – then progressing to worldwide vigilante, honored, feared and maligned around the globe. With a tenacious detective on his trail…

Mia (Margaret Qualley, Andie MacDowell’s daughter) is the hot college chick whom Light brings into his confidence, because – hot college chick. Mia being one of the cool crowd, the only way Light can cross her panty line is to show her how the Death Note works (because cool chicks love bad guys). Whereupon they join forces and vow to “change the world” by killing dictators and renowned criminals, in a swirling montage of creative deaths, and creative angles of them having sex without us seeing anything.

Light and Mia adopt a Japanese vigilante name, Kira (“justice”), and make their victims scrawl it near their final resting places, and before they can have censored sex a second time, their vigilante movement has attained worldwide acclaim, with copycat vigilantes adorning their kills with “Kira” graffiti, muddying the waters for all the police trying to track the original vigilantes.

Mia finds a website where people post names of people they want killed, and Light rightfully retorts they can’t kill people based on social media whining. And Mia plots to take the book for herself…

A mysterious man named L (LaKeith Stanfield, GET OUT) and his liege Watari (Paul Nakauchi) work with the police to track Kira, bringing a higher level of acting to this teen screamer. Looks a little incongruous, especially when non-binary mediocre actor Wollf faces off with the intense Stanfield. Light’s detective father (Shea Whigham) has no clue, although gives a good performance in a “No Small Roles” manner.

Since it has been ascertained Kira needs to see their victim’s faces to kill them, L wears a constant scarf around his lower face. And I cannot understand his reasoning in removing the scarf after he discovers who Kira is. Isn’t this the exact time you should wear the scarf?

From a manga magazine called Shonen Jump, the story (by Tsugumi Ôba and Takeshi Obata) is an intriguing fantasy, so I question the decision to have the demon portrayed in a manner that is regarded as “scary. If the story holds up well, making the demon frightening only detracts from the tale, because after our heroes are initially startled by Ryuk (where Light literally screams like a girl), they are passé about his appearances, and if no one else can see him, well, what’s the point of being all spiky and black and heavy metal trousers? The heavy cost of the demon-suit (worn by Jason Liles) could have been spared, and it would have served the same story purpose had Ryuk been represented as a dimly-lit guy in a trenchcoat – or maybe even just Willem Dafoe! Pretty scary even without special effects!

Apparently, the characters do not follow the traits of the source material. Paulina Florast writes: “Light is supposed to be super smart and charming not the stereotypical white emo character.” And Addcond5: “L shouldn’t be hosting speeches, he’s antisocial and awkward, that’s like his whole character, he would never make a speech.”

Adding to the incongruity, a contrived chase sequence rips out of nowhere, complete with 80’s synthesizer soundtrack and L sliding across cars like Riggs in LETHAL WEAPON.

In one respect DEATH NOTE is a commentary on trying to do the right thing and not being able to, no matter your moral compass. In another respect – look at that goofy demon! Movie makes good use of source music (opening with Australian Crawl’s Reckless and INXS’s Don’t Change – some Aussie nostalgia for me! – and ending on a powerfully contextual The Power Of Love by Air Supply), and there are many plot twists to keep you seat-edged until the final frames. On the other hand, that demon costume is incongruous to the point of distraction, robbing the good performances of their gravitas and making the mediocre performances look laughable.

In the end, movie is posing the question: Who would YOU write in the book (besides the obvious Justin Beiber, Dumbo Donald and Vanilla Ice)?