Is it real or is it B-Movie? No one in chat rooms can tell. 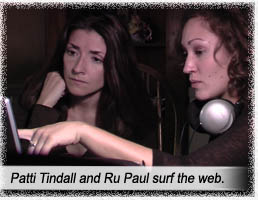 All because of a few lines of text at the head of DEATH OF A GHOST HUNTER: “In 2002 renowned ghost hunter Carter Simms was offered $5000 to perform a paranormal investigation of the Masterson house. Her investigation stands as the single most tragic paranormal inquiry in American history.”

Not bad marketing for a B-Movie. Carter Simms (Patti Tindall) is the “renowned ghost hunter,” for guys who like the S.I.L.F. type (Spinsters I’d Like To–), who spends three nights in the trusty house-with-murder-in-its-past, to determine whether it is haunted. (Original? No. Laughable? Yes.) Movie is supposedly based on her journals.

Set in Salem, Oregon, flashback to 1982 shows us the mother of the house drowning a doll supposed to be her baby, shooting her family via trusty shadows on the wall and blood splattering on said wall, and then taking her own life. Would have been much more tragic were it not for the filmstock stressed to look like “scratchy” 1930s footage. All it lacked was a honkytonk piano. If I remember correctly, the 1980s were only 20 years ago – how did the filmstock age 70 years?

Carter Simms is joined by a king dork videographer (Mike Marsh, also the co-writer) and a big-bootied brainless bimbo who looks like Ru Paul (Davina Joy, whose body just screams ‘screwing her way to the middle’); Lindsay Page the Jesus Freak completes this F-Troop.Writer-director-DP-editor, Sean Tretta, tries sincerely to make a scary movie, with ominous music, morbid concepts, old-fashioned scares (rather than CGI) – but mainly by keeping all the lights off. Yet there’s only so much a writer-director-DP-editor can do with bad actors. Make that no actors.

Patti Tindall (as Carter) is passable, but as soon as she is joined by the troop of non-actors, they drag her into their hellpit of sub-mediocrity. It’s like playing tennis – you always get pulled down to the other guy’s level. Still, Tindall is no Streep – her toneless opening narration is as chillingly blank-eyed as the narration in THE CREEPING TERROR.

Story goes from limpid to just plain stupid: Carter tells her drogues, “Ghost hunting is the process in which paranormal investigators use modern technology to obtain tangible evidence regarding the existence of life after death.” I can’t even begin to deconstruct the senselessness in that statement. When she mentions EVP (Electronic Voice Phenomena), we’ve crossed over. Into levels of intelligence resembling cowdung.

DEATH OF A GHOST HUNTER has the potential to be a classic, old-school, gothic ghost story, not relying on hillbilly mutilation or anal-retentive axe-killers. But potential counts for nought with no actors and the cameraman’s shadow in shots. And after screaming amateur at us – from the slipshod editing, to lighting a room by shining flashlights on each other’s faces – Tretta has the brass-balled audacity to have his characters mention revolutionary movies like THE EXORCIST and BLAIR WITCH.

While the videographer constantly changes batteries, missing all the “haunted” action, such as chairs moving and ghosts actually appearing, the bimbo mills about aimlessly, and the Jesus Freak tries to subvert the investigation because she’s a good christian, and must protect the reputation of the good christian lady who mass-murdered the family in the house. So while wearing a religious head-box (like something out of CARRIE), she kills all the “ghost hunters” – because that’s what good christians do.

The “ghost hunters” tell us that supernatural “hauntings” occur because the people in that locale were murdered violently. Logic denotes that when other people are murdered violently at the same locale, THEY should also haunt it as ghosts. Suddenly – logic! Carter Simms actually wakes up as a shimmering, low-budget special effect after the christian freak dispatches her. Logic may be served, but then inconsistency takes over – because, after all, the logic is draped over something ILLOGICAL in the first place, so it cannot be sustained. To wit: where are Carter’s ill-fated crew? Which para-dimension are they inhabiting? They were all murdered by the christian freak, who committed suicide. And where is the christian freak? But Carter Simms can only see all the original ghosts of the house. And – they’re still appearing as insubstantial wraiths to her! One would think that playing on their team, she’d now see them clearly. Now where’d I put that Supernatural Rulebook written by living people?

The other great lapse in logic is something which the chat room dweebs could never fathom: if all this is taken from Carter’s journals, exactly which entry stated she turned into a shimmering low-budget special effect?

And it’s a good thing her CLOTHES have souls as well, so she can appear fully clothed as a shimmering low-budget special effect. Only a benevolent christian god would allow ghosts to appear fully clothed to comply with American censorship laws; only a benevolent christian god would leave a soul stranded on Earth so scared, broken, destitute and meaningless.

The grandest disconnect is not in the movie – it is with gullible viewers; those same good christians who believe in the paradoxical, illogical, all-powerful yet powerless magical christian god, who believe this is not just a B-Movie… as they speculate ad insanitarium, dragging everyone else down to their F-level.