David Carradine can always claim that he once beat up Rocky! Grasshopper versus Balboa in a battle to the ketchup.

After Carradine’s KUNG FU and before Sylvester Stallone’s ROCKY, the two renowned pugilists would clash in this DEATH RACE 2000 where arts were not martial, the most famous boxer was still Muhammad Ali, and acting was optional. 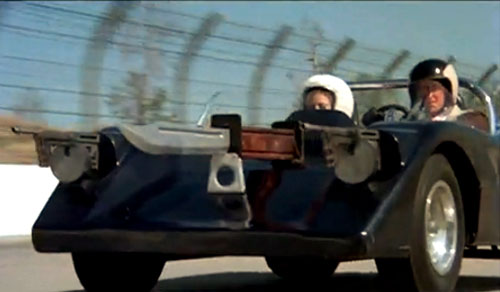 When being HIT by a car was simply not painful enough.

It’s called Death Race because that’s soooo testicular, and it’s set in 2000 because that’s soooo The Future. Society has degenerated to a bloodthirsty dystopia, where an annual road race that involves running down pedestrians across the country is broadcast and viewed with animal enthusiasm. That’s the only aspect of this trash cult actioner that holds any worth – it’s a saw-toothed satire on the game show mentality that was sweeping First World countries in the mid-70s (though it more closely resembles the “Reality TV” craze that is the bane of intelligent television in this modern dumb epoch).

Everything else about this scatterbrained road rager is worthless. No surprise when we see the producer – Roger Corman! At the time, his reputation was still plastic, coming off many low budget stinkers but with enough clout to get a movie made. Nowadays he has longevity on his side, and is regarded as an industry playa – but he is still producing low budget stinkers! (Dare you doubt? Choose wisely from DINOSHARK (2010), PIRANHACONDA (2012), or SHARKTOPUS VS. MERMANTULA (2014). What price integrity, Roger?)

Drivers have names as flamboyant as their death machines: Nero the Hero (Martin Kove) Matilda the Hun (Roberta Collins), Calamity Jane (Mary Woronov), Machine Gun Joe Viterbo (Stallone), and Frankenstein (Carradine). Their cars are outfitted with supposedly gory instruments of death lining the grilles. But they’re all as plastic as the host of the TV show Death Race (played by DJ Don Steele). 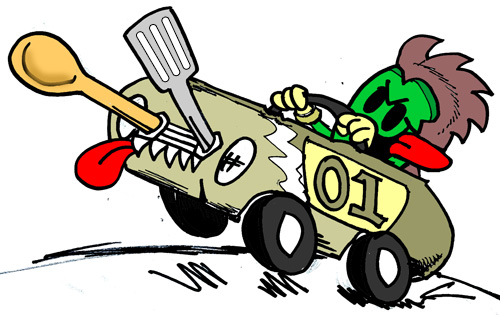 Simone Griffith is totally hot, totally NVP, totally tits navigator for Frankenstein. But she’s really undercover, part of a resistance group who are even worse actors than the drivers. The Resistance are against the President and his murderous car race, and will kill anyone to stop the race that kills anyone. But Simone comes down with Stockholm Syndrome and gets naked for Frankenstein. Thankfully, the soundtrack switches from jaunty disco music to irritating romantic music for a few minutes.

What I want to know is: Who is monitoring these kills? How are we seeing these drivers onscreen? The more people they kill the more points they get, so why are they driving on bare roads across country? Why not drive through a shopping mall? How does the pilot who is shooting at Frankenstein think Frankenstein is going to hear him ordering him to stop when Frankenstein has no intercom in his car?

Stallone has the personality of a belligerent cabbage. How he ever got funding and the permission to write and star in ROCKY this same year is a mystery for a greater mind than mine to solve. When Kung Fu Master starts beating on him, there’s no stopping the disco.