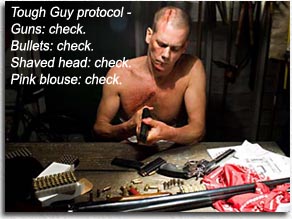 The actual sequel to Charles Bronson’s 1974 DEATH WISH, the movie DEATH SENTENCE (written by same author, Brian Garfield, in 1975) delivers a solid thematic punch, pounding us with the message that if enacted decisively and quickly, vigilante revenge can be fruitful and satisfying, but dilutes its own message with its sappy denouement. (So many movies chicken out in their last acts, it’s getting annoying investing our enjoyment in these things.) Very few movies are willing to say out loud that revenge is sweet or righteous, but DEATH SENTENCE says it loud and proud with its vigilante “anti-hero” – until it insidiously reneges on its own truths.

Starring that guy who is, at most, six degrees from anyone, Kevin Bacon (as Nick Hume), DEATH SENTENCE makes him a vigilante by killing off his son in a gang initiation shooting. When Hume decides not to indict the teen thug who murdered his son, opting to go after the thug imself, he is tentative and wary about that decision. The movie follows his growth into the heartless killer he would need to become to enact his revenge. Nice angle. Then the movie nosedives in its final moments as it panders to MPAA and societal gutlessness by making vigilante “hero” Hume pay for taking the law into his own hands, as he transmogrifies into the type of killers he hunted, morally and physically (stated veeery obviously by the head villain when he says to Hume, “Look what I turned you into – one of us!”) and dies after fulfilling his revenge quota (just like eating your cake while still having it – a happy ending that supposedly isn’t – the filmmakers kill off their hero only after he’s killed off everyone else; how convenient, just like Real Life!).

DEATH SENTENCE opens nauseatingly with Hume’s idyllic family life montage: smokin’ wife (Kelly Preston), two sons, every major boy-event (first bike rides, first steps, first base hit) videotaped professionally and made to look like stressed film. There’s even a picture of both sons on the son’s bedside table – unnecessary icing on an overbaked Norman Rockwell cake: maybe in the parent’s bedroom, but what teen would have a picture of himself and his teen brother on his bedside table?! I don’t wanna go there… Very quickly, we’ve jump-cut to dad and son in bad part of town, tatted gang wearing leather, son killed, rain-soaked funeral, cop who doesn’t follow procedure…

Back in ’74, when Bronson (as Paul Kersey) took justice into his tough-guy hands, America was reeling from rising crime rates in major cities, so his vigilantism was applauded by audiences. The DEATH WISH sequels progressively became unwatchable – not because of escalating violence or morality conundrums – but because (like the PLANET OF THE APES series) their production budgets nosedived with each sequel. DEATH SENTENCE gives vigilantism the production values it deserves.

Since DEATH WISH and the DIRTY HARRY series, most movie media has shied away from people exacting their due recompense, instead muddying the messages with moral hypocrisy, and unrealistic and unsatisfying resolutions. Now, not only is there Jodie Foster’s vigilante vehicle, THE BRAVE ONE (Sep 2007), there is also a mentally-retarded Amerikan president reneging on every law of the world and making up vigilante rules as he goes along, saying out loud how he kills citizens of other countries without any due process, how he tortures them without any evidence, how he would go about killing people of still more countries who have nothing at all to do with his initial vengeance strike against the faction who attacked America on September 11, 2001; an immoral madman who sends his own countrymen to die for his vigilantism, entreating them kill innocent people who are supposedly paying the price for their stance against Amerika. Vigilantism is now so enmeshed in the fabric of the Amerikan psyche due to the imbecile George W. Bush’s actions, that movies like DEATH SENTENCE easily gain a foothold. So it is a wonder why the filmmakers chose to slap on a pap ending to satisfy the puritans. They were obviously forced by the MPAA. Talk about moral hypocrisy.

After Hume’s son is slain, then it’s Suburban Dads Gone Wild. And a very satisfying avenger The Bacon makes, seeking and destroying his son’s killers in a compelling, “realistic” performance. Garrett Hedlund is the head street thug, Aisha Tyler is the non-prying detective, and John Goodman will surprise you, if not make you laugh out loud at his impertinent miscasting.

After his first almost passively-violent (yet still satisfyingly vengeful) encounter with the young thug who killed his son, Hume finds he is forced to take charge of his vigilante destiny when the gang comes after him for their own revenge.

The film is well-made, well-directed, with a gritty look to the filmstock. There are some weird coincidences gussied up to look like “twists” and a tense foot chase that ends with a well-executed car-falling-off-roof stunt, which looks every bit as good as the trailer.

When Bacon shaves his head, and arms himself with an arsenal that would make Rambo say, “Dude, dial it down to a seven!” we know this ain’t Paul Kersey’s Chicago anymore. Yet it is all for nought when we realize the movie is tacking toward a gutless resolution that makes Hume look like the thugs he hunts. A great film experience ruined by not taking note of how Bronson and Eastwood never had to bow to moral hypocrisy.