The funniest thing about DEATH WISH 3 is not its sincere attempt at storyline, nor its childish attempts at action-movie dynamism – it’s the street thugs who look like extras from a Pat Benatar video. 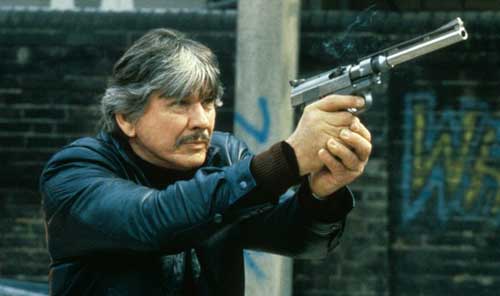 Bronson guns down a thug while a tribble lands on his head.

Director Michael Winner (after his slamming take on vigilantism in the original DEATH WISH, 1974), seems to have resigned himself to mediocrity, after the jaw-dropping turd called DEATH WISH II (1982) and now the marginally superior DEATH WISH 3 (even the tags are confused: first Roman numerals and then Arabic).

Architect and part-time vigilante Paul Kersey (Charles Bronson) returns to New York, to find his friend killed. Being at the scene when the generic cops arrive, he is taken in. But the police captain, Shriker (Ed Lauter) knows Kersey’s “vigilante” reputation, so instead of booking him, he enlists Kersey (unofficially, of course) to help him lower the spiraling crime rate in his district; basically gives Kersey the go-ahead to just “do what he does” – kill street criminals on his own volition and cognizance. It’s the stupidest plot line in history, with a thousand legal, illegal, ethical and unethical loopholes, but we remember the grand days of Bronson in ONCE UPON A TIME IN THE WEST and THE MECHANIC and we let it slide. This poor old curmudgeon looks ready to keel over or bitchslap someone for walking on his lawn. Let him have his paycheck and keep being Harmonica in our heads… 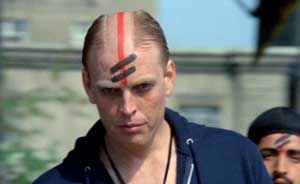 The leader of the thugs… no, really, that’s his identifying mark. Stop laughing. Why are you laughing?…

Head thug is Fraker (Gavan O’Herlihy) who looks like the spawn of Jake Busey and a Pat Benatar dancer. All the thugs sport a lively piece of warpaint on their foreheads – to cheesily identify them as thugs. Thank goodness or we would have thought those parachute pants and cutoff midriff shirts and fruity bandannas and chains were the feature in a gay Mardi Gras or an aerobics workout video shoot. And there’s Alex Winter sporting that warpaint! (yes, Bill from BILL AND TED’S EXCELLENT ADVENTURE) – with five lines of dialogue, delivered like a guy who will one day star in BILL AND TED’S EXCELLENT ADVENTURE.

So cute how DEATH WISH goes head to head with DIRTY HARRY (by now, the franchise on its fourth film SUDDEN IMPACT, 1983) by introducing Kersey’s .475 Wildey Magnum, with specific dialogue disdaining Harry Callahan’s weapon of choice, “…a .44 Magnum is a pistol cartridge; the .475 Wildey cartridge is a shorter version of the African big game cartridge. Makes a real mess!” (Take that, Harry!)

But there’s no competition. No matter the lackadaisical nature of the last two HARRY films, none of them were so inexpertly directed and staged as this kill-fest TV movie; no HARRY film had to put up with editing this sloppy, action this badly choreographed and acting this atrocious.

When the Benatar Gang kills Kersey’s inexplicable girlfriend (Deborah Raffin), the look on his face conveys tragedy along the lines of “I’ve got a flat tire and I don’t want to change it in this tuxedo.” When one of the B-actors’ wives is raped and dies, the B-actor’s emoting can only mean, “I’ve just dropped my ice cream cone!” Later when the lovable old neighbor (Martin Balsam) is killed, director Winner has the temerity to use this same B-actor for a reaction shot, who this time wrings from his soul something along the lines of “Oh, man, I can’t believe it’s raining after I planned this camping trip.”

Bronson is now 64 years old, and though he’s keeping his body trim and fit, his one-note acting method still doesn’t threaten the Hoffmans or Hackmans. Not even the Christensens or the Keanus.

Director Winner is ambitious – he’s trying to stage an apocalyptic reckoning, a battle for the soul of Suburbia, if you will, but he lacks the ability, budget, actors, stuntpeople and crew to make it work. The third act Running and Shooting degenerates to a muddle of arbitrary explosions, people posing and shooting, and people jiggling spastically like a John Woo movie upon being shot. It’s like schoolkids playing cops and robbers. Let me update that to Grand Theft Auto. Only the actors are more human in GTA.

The NRA should love DEATH WISH 3, as the townspeople pull out weapons from drawers and start firing indiscriminately. Wait – so they’ve had these weapons all along? Just what level of theft, rape and apocalypse were they waiting for before actually using them? Oh, they were waiting for DEATH WISH 3. These average citizen lemurs now suddenly gain the stones to shoot people point-blank and then celebrate! NRA CEO gargoyle Wayne LaPierre (“The only thing that can stop a bad guy with a gun is a good guy with a gun”) should be stroking himself to fainting… A whole street cheers after shooting some bikers point blank, with kids stepping over the dying bikers to join the cheering: “Yay! These bikers were shot in the face and now they’re bleeding and dying right in front of us! Such fun!” (Wayne LaPierre just fainted from all the blood rushing to his snub nose revolver…)

These lemurs must also be remembering Bronson in THE MECHANIC, where he said, “Murder is only killing without a license.”

Yes, and Love Is a Battlefield…