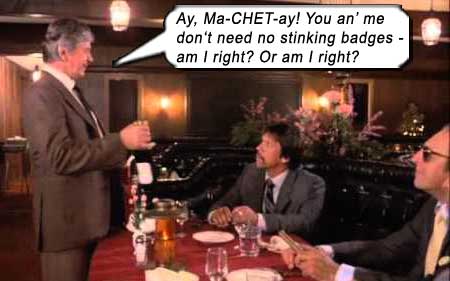 From duds to merely dull.

DEATH WISH 4: THE CRACKDOWN surprises us by actually getting close to a plot!

After two sequels written by babies and directed like tweens measuring their dicks, this third sequel to DEATH WISH (1974) has actual pacing, quarter-decent acting and a halfway compelling plot that includes a couple of good twists. It helps that it’s borrowed from YOJIMBO.

(Kurosawa’s YOJIMBO (1961), remade as FISTFUL OF DOLLARS (1964) starring Clint Eastwood, Bronson’s toughguy peer, and the man who actually holds the macho crown that Bronson might have contested had he not done any DEATH WISH sequels.)

So DEATH WISH 4, like YOJIMBO, like FISTFUL, is about a man playing two sides against each other until both implode in paranoiac gang war; in this tale, two Italian mobster families (led by Perry Lopez and Mike Moroff) who run the city’s drugs, square off. Well, they’re trying to portray Italian mobsters but Lopez, Moroff and all their hoods look like they’ve just come from a double-shift at the pizza parlor. Watch for Danny Trejo in a small role as an Italian henchman. See what I mean?

Architect/vigilante Paul Kersey is in yet another inexplicable relationship with a blond spinner 30 years his junior (Kay Lenz as Karen-faux-Farrah bo-bana fo-fana), and he’s architecturing the shit out of his job, leading a normal life, sleepwalking through this low-bar role – until Karen’s daughter dies from a forced cocaine overdose. They should have seen that coming when her date picked her up in a muscle car with the radio on the Generic Guitar Solos channel.

Featured high points of humor in the DEATH WISH series are when people are told that their loved ones are dead. Most of them react like they’ve eaten ice cream too fast.

After Kersey kills the guy who sold her the drugs – once again employing his blinkered modus operandi of attacking the bottom rungs of the problem – that would usually be the end of any DEATH WISH movie, but now a millionaire (John P. White) calls on Kersey, providing him weapons to go after the big fish, the mobsters who sell the drugs. At this point, in any good movie, we’d wonder what exactly is motivating Kersey’s vigilantism. In the first three movies this is never explored because he was exacting revenge for people close to him. But now he is being asked to “professionally” premeditate the deaths of numerous people whom he has no stake in. He’s already making a good living with his own architect firm, he doesn’t harbor any repression because he sates his revenge whenever he feels like it and doesn’t encounter any consequences, and he’s tapping the slimmest blondes in every town he lays his hat. Why would he go out of his way risking his life, risking legal capture, foregoing sleep, and for no pay, to infiltrate these two mob strongholds?

Karen-fo-fana beseeches her generic editor to let her write an exposé on drugs, and is told that everyone from doctors to schoolkids are using cocaine so it’s passé, but she can do it as long as it doesn’t ruffle his perfect Lego hair. He’s teasing us though, because Karen and her goody-two-shoes story are completely excised from the script until the plot calls for the damsel-in-distress for the climax.

We can see Charlie Bronson has kept himself in shape, but is it realistic how Kersey can knock out everyone with just one punch? One guy goes down after being hit by Kersey’s lunchbox!

There are two cops hot on Kersey’s trail, George Dickerson and Soon-Tek Oh, but they aren’t what they seem. And neither is the millionaire. Double crosses fly like bullets, as writer Gail Morgan Hickman (who also co-storied Eastwood’s 1976 THE ENFORCER) knows a little about misdirection, reveals and payoffs; combined with new director J. Lee Thompson (taking over from Michael Winner, who ran the series into a ditch), it’s enough to make DEATH WISH 4 the best of the sequels.

Now someone wake up Charles Bronson and tell him.