Charles Bronson returns as vigilante Paul Kersey in DEATH WISH II. And we wish he hadn’t. We got the point in DEATH WISH (1974): True justice is revenge. And people like it that way – just too pigeon-scared to admit it in “civilized” society. So now we get another film saying the same thing – only with the added spice of juvenile direction, rank amateurish editing and absolutely stunning non-acting. 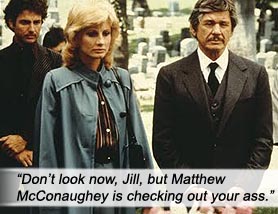 David Engelbach screenplays with a 1st-grader’s concept of story structure, while Michael Winner directs like a man possessed by demons – demons who don’t know how to direct.

Five punks kidnap and rape Kersey’s daughter (Robin Sherwood), who wasn’t doing too hot to begin with, seemingly left retarded after her experience with Goldblum’s freaks in DEATH WISH, institutionalized and speechless – now raped, and subsequently jumping out a window to kill herself, but more importantly, to get the inane plot going.

Architect Paul Kersey, between trying to express grief convincingly and adding expensive doorways to his client’s building plans, decides to hunt down the killers, while keeping his night killings a secret from his new blond interviewer girlfriend, Geri (real-life spouse Jill Ireland). After a night of sexy vigilante thrills, he comes home dripping blood from a big gash in his arm; you would think this would curtail his night of sexy girlfriend thrills, but one quick wrap later and he’s spending the night. One wonders how timidly she makes love if she never notices a bandage the size of a bedsheet clotting a gaping wound on her manfriend’s body.

There are no interesting methods to flush out the punks or chasing down clues to their whereabouts; Kersey finds them by simply wandering the streets in a docker’s cap, hunkered down in some vain attempt to look incognito. Of course, surprisingly, he finds them – or else the movie would consist of following an old guy around Hollywood streets doing nothing, which is what most of the movie is anyway. When he finds them, he shoots them. Usually he’ll say something cutting and incisive like, “Goodbye,” but mostly he keeps his thoughts to himself, so as not to interrupt the flow of non-action.

Jeff Goldblum was the extra in DEATH WISH who would rise to stardom; here, watch for Laurence Fishburne as one of the punks.

Vincent Gardenia so loved being a doughy detective in DEATH WISH, he plays the same guy here.

Of all the disbelief we are asked to suspend in this slow-moving sludge, the greatest is the police response time to high crime districts. In this magical version of Los Angeles, police arrive at a crime scene ten seconds after shots are fired; and after Kersey murders one of the punks, it is reported on the news twenty minutes after the act!

Music composed by Jimmy Page, Led Zeppelin’s guitarist/warlock, and we can hear decidedly Page-ian flourishes in the “gang” segments (Theremin sound effects, and bowing a guitar – as he so uniquely demonstrates on THE SONG REMAINS THE SAME); and he’s not doing a bad job with the regular orchestra either. The most amusing aspect of Page’s participation is that he is scoring a movie featuring “punks” – rebellious rock and roll youth – and at the time of this movie, he was one of the greatest proponents of rebellious rock and roll youth.

After DEATH WISH (1974), the rest of the series (up to and including DEATH WISH V: THE FACE OF DEATH, 1994) only served to sully the mighty reputation of Charles Bronson, even as the series simultaneously banked on his past reputation as an iconic action man (THE MAGNIFICENT SEVEN, THE DIRTY DOZEN, RED SUN).

DEATH WISH II ends as lamely as it played, with Kersey’s architect boss asking him if he’ll be free to attend a party tomorrow night, and Kersey saying with a wink-wink to the audience, “Of course I’m free. What else would I be doing?”