Dying is Easy, Scriptwriting is Hard.

Ian Stone (Mike Vogel) keeps dying. Stalked by Stan Winston demon-thingy creations, he is killed at the same time every day, and then keeps waking in different lives with different professions. 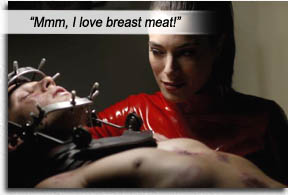 THE DEATHS OF IAN STONE is an original premise, the first act, dynamite, as Vogel gets his Ewan McGregor on and tries to avoid being killed in creative ways. Because we cannot clearly see his demons, we presume there may be more than meets the metaphysical eye here and we are the heart in Ian Stone’s throat as he is pursued relentlessly.

No matter every new life of his, Jenny (Christina Cole) is always around, as Ian’s co-worker or girlfriend or neighbor, unaware she is living through multiple lives with him.

Unfortunately, the breakneck pace of this horror thriller cannot be sustained without some plodding exposition. Some old guy gives Ian the lowdown: the demons are Harvesters and they feed off people’s fear. They keep killing him because… well, this is where the illogic starts bleeding through the fabric of the writer’s nice blood-red cardigan.

At first, we hope there is redemption in the mythical allusions – in the form of a dominatrix-demon named after the Greek wife of Argonaut Jason, Medea (Jaime Murray) – before we realize writer Brendan Hood probably just named the villainess after his cat. Then DEATHS OF IAN STONE quickly degenerates into standard “monster” fare with latex facemasks, grumbling gore and supernatural “rules” spewed at us at lightning speed to reconcile all the physics laws being broken to serve the asinine plot.

Inexperienced director Dario Piana held a smacking hot property, but failed to follow through. Whereas the first act sang like a slayer’s scream, the third act quickly starts looking and feeling like a TV movie starring Eric Roberts. For example, the Harvesters in the first act were chilling; by the time Ian Stone turns into a Harvester himself, he looks like Eric Stoltz in MASK. Ironically, Ian Stone looks like the one with the mask on.

Even with all these rules shoved into our skulls at the last minute, no one explains why all the other Harvesters, when they change from people to monsters, lose their clothes, yet Ian Stone retains his edgy Runway Model shirt. (Well, so we can identify him from the others, of course – the edgy modelwear for the ladies who like bad boys.)

Turns out the Harvesters are after Ian’s girl! For reasons as equally inane and illogical as his being a Harvester. And after all the stalking and attempts on her life, when the Harvesters eventually acquire her, they don’t kill her immediately; they wait for Ian Stone aka Eric Stoltz to arrive and beat the special effects out of them.

After all, dying is easy. Comedy is hard.