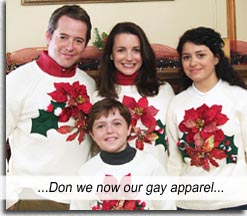 Steve used to be the “Christmas guy” in town before Buddy moved onto the block, so – being Christmas, when competitiveness and backbiting are in season – he decides to reclaim his crown by attempting to out-Christmas Buddy.

If “being seen from space” is Buddy’s objective, and cost is obviously no object, why not 2000W Lycian spotlights blaring upwards, instead of 5W Christmas bulbs?

Insipid Kristin Davis (that insipid chick from SEX AND THE CITY) finds herself married to the real life husband of her pal from SEX AND THE CITY, Sarah Jessica Parker, making the reasons for her hesitancy to get intimate with Broderick quite obvious, though nicely adding to her real life sheen of insipidity.

After complaining to Parker’s husband that the spirit of Christmas is found in little unplanned moments (“having French fries and chocolate milk on the kitchen floor with your dad”), and complaining that he was too meticulous trying to plan out everything, in a stupid irony only allowable in a Christmas movie, she is won back by Steve and Buddy teaming up and meticulously planning a lighted pathway and a giant dinner.

If that doesn’t make your flesh crawl, just wait for the rendition of Oh Holy Night by the town collective when the lights fail. And then cheer in piggish joy when the lights come on again and Buddy’s house is, in fact, seen from space, despite every law of physics that would state otherwise.

Written by three first-time TV writers who think we’re as idiotic as they are, and directed by John Whitesell (MALIBU’S MOST WANTED, 2003) like an insult to retarded people, DECK THE HALLS is one of those skin-rashing elements of Christmas that make us thankful it only comes once a year.