The Rise of Aquanetted Civilization: The Ladyboy Years.

Director Penelope Spheeris turns up the volume in her chronicle of the hedonistic 1980’s Southern Californian rock scene in THE DECLINE OF WESTERN CIVILIZATION PART II: THE METAL YEARS. (We need to be precise about this rockumentary’s focus because it does only represent a lewd, crude and skewed view of a certain slice of musicdom’s variegation.) 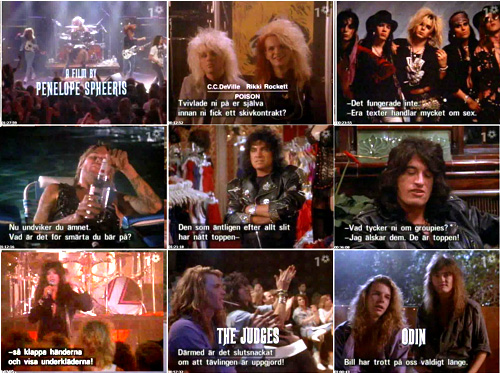 Excellent tongue-in-ass-cheek title, but it’s not truly covering all of Western Civilization – we’re just here on the l’il ole Sunset Strip, West Hollywood, California. That being said, the strange fact is that even though the “metal years” exfoliated but a small region of Southern California (via hydrocarbon hairspray), it became the template that drove a large portion of Western Civilization’s rock economy during the douchebag 80s.

And Spheeris has her finger on the slit wrist pulse of a generation with this brain-melting exposé, capturing a snapshot in time that will last forever – or until the beer runs out.

Spheeris structures DECLINE around frank interviews she conducts with three echelons of the metal scene – superstars, rising bands, and big-haired douchebags. She is an excellent interviewer, asking all the right questions (about sex, money, fame) and badgering legitimate answers. And the editing by Earl Ghaffari keeps it as kinetic as an after party with bottomless vodka and topless strippers.

The superstars are Paul Stanley, Gene Simmons, Ozzy Osbourne, Joe Perry, Steven Tyler, Lemmy Kilmister and Alice Cooper; lucid, humorous, insightful, encouraging, arrogant, self-effacing yet classily aware of their veteran status. The rising bands have charted and are on their stairway to heaven (if they can hold it together) – Megadeth, Poison, Faster Pussycat, Lizzy Borden. And the bighairs have jumped on the “glam metal” sub-genre that owed its ascendance arguably to Quiet Riot’s album Metal Health topping the Billboard charts in November 1983 – Odin, London, Seduce. From the superstars, we sometimes get stock answers to questions we know they’ve fielded a million times, but from the youngsters we truly glean something we’ve never been exposed to before – the fanaticism of a generation weaned on superstardom as an actual job profession.

The movie’s slogan tells us everything about those youngsters vying for the limelight: “It’s more than music… it’s a way of life.” They desire stardom as a job, rather than music as a career. But “stardom” is not a profession you can start in the mailroom and work your way up to the corner office. There’s never a guarantee you’ll be a superstar even if you do everything right and your music doesn’t suck. And that’s the reality that these hopefuls don’t grasp, that they will eventually discover The Hard Way.

Spheeris features five bands in full Aquanetted regalia and onstage performances (Odin, London, Seduce, Faster Pussycat and Lizzie Borden) and also interviews various members from other Strip bands that you will never know and never need to know, and all that comes to mind are two words: Spinal Tap. Or, Shit Sandwich. Or, someone else’s vomit.

The caricature has become so extreme it’s almost ominous – if it weren’t so funny. When Spheeris asks the wildly Aquanetted hopefuls, “What would you do if you didn’t make it?” to a man, they each answer, “Oh, I’ll make it!” With surety. When that question is repeated, they repeat their answer. They ALL want to be the top of the pile. But there’s no business model on Earth that would place every douchebag with a furious-pink guitar and a Blackmore-plagiarized riff at the TOP of the charts, earnings and popularity. It’s just not economically sustainable. The Economy echoes Jesus’s words: “There’s too many of you! Don’t crowd me!” So though it’s good to have high aspirations, there has to be a modicum of cynicism to temper the wankerism. And it helps if you’re not a leper.

Then there’s the young bighair douchebag who admits, “I don’t have a job because I don’t like anyone telling me what to do.” Sorry to bust your bubble, naive boychild, but if you become a superstar, everyone tells you what to do.

Far be it from me to disparage these hell-bent-minded rockers – hell, I was one of them back when dinosaurs ruled the Earth. This doc reminds me of that Devil’s Coin Toss: “If you flip this coin and it lands on heads, you will have everything you ever wanted; if it lands on tails, you will lose your life. Do you flip the coin, or do you turn away and go on with your life the way it is?” These are the people who would flip that coin.

Say what you will about the intellectual capacity of these bands, they really are very good at what they do – except what they do isn’t very good. If the superstars are here for marquee strength and to secure funding, then these hopefuls are truly the beating heart of this rock-doc. Spheeris has only featured bands who have truly worked hard at their craft. They are tight as hell, and a few of these musicians probably deserve more than they were dealt in the business. The point of any documentary is to expose something which “needs to be seen.” Gene Simmons and Alice Cooper didn’t need to be seen at that stage – they were the top of the rock pile, but Spheeris – maybe unintentionally – was giving these youngsters a shot at widespread publicity.

An especially disturbing interview is with Chris Holmes from W.A.S.P. Nuveau-riche and floating in a pool downing vodka by the bottle, with his disdainful, humiliated mum poolside, this segment was like a stretch limo with a jacuzzi in it populated by pear-bottomed bubbleheads slamming over a spike strip in the road. It ground the movie to a thought-provoking halt. I watched DECLINE in a Sydney, Australia theater with the whole Sydney Metal Scene in voluminous attendance. It was a night of gregarious revelry with My People of Noise – but the Holmes interview gave us all pause. It wasn’t Ozzy doing his incognizant shtick while cooking breakfast, it wasn’t Paul Stanley throwing out flip yet profound nuggets (“Once you have money, you realize that it’s really not important. What money gives you the opportunity to do is forget about money”); here was a man in pain, a soul riven in torment more real than any skulls on t-shirts or reapers on album covers. Holmes had gone past cynicism and straight to self-loathing. Spheeris asks, “What do you consider yourself?” Holmes: “A piece of crap.” At first, it seems like rockstar shtick, but Spheeris keeps rolling the cameras past the point of uncomfortable silences and we realize this is truly the Dark Side that that man Vader used to speak of.

It’s telling that the superstars are still touring energetically after twenty odd years since this doc (Megadeth having joined their ranks – and that’s Dave Mustaine on the movie poster); the rising bands flamed out quickly and stagger on with pockets of nostalgia supporters; and the bighairs? Not one of them – repeat: not one! – survived their fifteen minutes. Spheeris gave them a shot, but the vagaries of the industry tore them to pieces. DECLINE was simultaneously their Stairway and Golgotha.

THE DECLINE OF WESTERN CIVILIZATION, PART II: THE METAL YEARS is an insular, yet wildly enjoyable ride through the Sunset Strip subculture, with the top down and the jacuzzi bubbling. It’s not an historical document – you will not hear of Slade, T-Rex, The Sweet, or even Bowie’s seminal contribution to this cultural progression; the overlording presence of The Big Three (Sabbath, Purple, Zeppelin) is not felt or mentioned (except for Ozzy’s wired contribution); there is no NWOBHM, and there is unfortunately no footage of the superstar bands onstage. For an authoritative overview of all that is Metal, we would have to wait for Sam Dunn’s incredible treatises METAL: A HEADBANGER’S JOURNEY (2005) and METAL EVOLUTION (2011).

Now, where do I get one of those Devil’s Coins? I think I’m ready to flip…