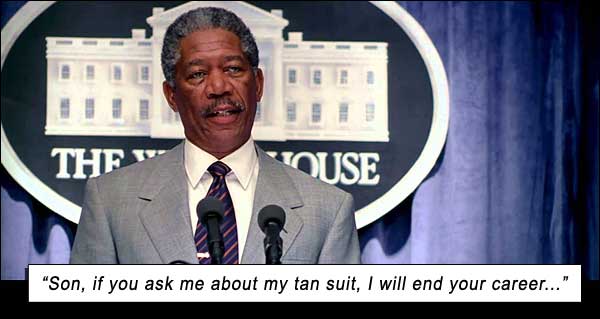 Sure enough, someone does. Trouble is, that someone is The Legend Robert Duvall… oh, ye gods! Did he need the money that badly?

An asteroid discovered by Frodo is speeding toward Earth and Bruce Willis wasn’t answering calls to Save Our Shit because he was making That OTHER Asteroid Movie.

Morgan Freeman is a black American president – which should give you an indication of what a far-flung fantasy this movie is (invoking just a little too much “god” for us to believe that America has the brain capacity to separate church and state), who sends up astronauts Duvall and the lovely Mary McCormack (and a cast of dorks with hastily-invented science resumés, including Ron Eldard and Jon Favreau) to plant explosives on the asteroid and blow it up before people realize it’s the same plot as ARMAGEDDON.

The movie follows two families’ arcs (which are meant to signify “humanity” and make us care about what happens to it) that are admittedly poignant: Tea Leoni and her estranged dad, and Elijah Wood trying to make his underage neighbor Leelee Sobieski before the world ends. Meanwhile, other sad stories subplot the road trip into space, like Duvall’s old astronaut having outlived his fame, one of the astronauts being hurled into space, and one of them going blind from looking at the sun (tragic consequences of not Getting The Hell Outa There).

IMPACT seems to be two movies mashed together badly, as the intriguing opening sequences are quite good (involving Vanessa Redgrave, James Cromwell and Freeman – hey, of course, that’s why they’re good); and the discovery of the Extinction Level Event is revealed well (which of course leads to ignorant mentions of “the asteroid that killed the dinosaurs”), but it suddenly switches gears to the astronauts who have to blow up the rock, and these Get-The-Hell-Outa-There sequences grate against the Earthbound sequences. Then when director Mimi Leder tries to humanize the astronauts (with overlong tragic goodbye speeches to their other halves on Earth), movie trips over and bashes its face on Maudlin.

The great Richard Schiff has nothing to do but sit on a couch watching TV with his Concerned Face No. 6.

Movie might still have redeemed itself by showing more than just two empathetic families, and how humanity is actually one sprawling mess of selfish animals; instead, we get the sad/happy ending (is that why they call it “sappy”?) of the younguns surviving while their parents are killed like the dinosaurs.

And after the danger has passed, Morgan Freeman gives an inspirational speech that makes our flesh crawl.