Immortal! They just don’t play ’em like this anymore.

As the sun set over the Californian suburbs of Pomona, Chino and Rancho Cucamonga on April 6th, 1974, after an hour’s delay, the loudest band in the world, Deep Purple, would take the stage at Ontario Speedway for the California Jam Festival.

DEEP PURPLE: CALIFORNIA JAM is a vintage masterpiece. Not the best performance by the Mark III lineup, but surely will live on as one of the legendary displays of musical virtuosity and ferocity.

As a mighty rainbow arcs upstage, in front of 250,000 fans (the highest paid attendance at a rock festival, and highest gross in history), as a Good Year blimp hovers overhead (first time at a rock festival), eight bands would take that stage (including Black Sabbath, Earth Wind & Fire, The Eagles, Emerson, Lake and Palmer), but none would capitalize on their performance as Deep Purple did. 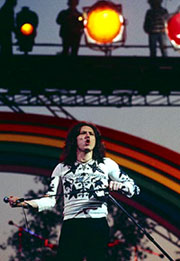 Deep Purple arrived in their private plane with their name on the side (the first time a band arrived specifically for a music festival in their own plane). Their chosen onstage time was “sunset,” but due to other acts finishing early, Ritchie Blackmore locked himself in the dressing room, refusing to go on until sunset.

With the dissolution of the legendary Mark II lineup (Ian Gillan and Roger Glover departed after Who Do We Think We Are, 1973), Purple released Burn in early 1974 with Mark III. This would be one of Mark III’s first performances.

DAVID COVERDALE (vocals): “Comin’ outa nowhere / Drivin’ like rain…” As he would sing on a later release, Stormbringer (Nov 1974), David Coverdale came outa nowhere to front Deep Purple – suddenly he’s onstage to 250,000 fans. One can only dream… I love that guy’s voice; always sounds like he’s just come from a marathon session of licking pussy. Yet at the Jam, his youthfulness is apparent, his vocal cords not quite warmed, stage moves not quite displaying the womanizer strut he would grow into. We can see the slight friction between him and bassist Glenn Hughes, who joined Purple with the condition that he would have equal lead vocal duties with Coverdale. Unseasoned at the time, Coverdale had to accept the deal. (At this gig, he should have also handed over the third verse of Space Truckin’ to Hughes, who would have done it banshee justice.) Still, after the pyrotechnic jolt of their first album Burn, who’s feelin’ mistreated?

JON LORD (organ, piano, keyboards): The Maestro (as he would be introduced by David Coverdale years later in Whitesnake), composer, pianist, god of steel-belted Hammond, Lord holds the musical artisty together for the lads. When the Lord speaks, we listen. He comes out front to introduce new members Hughes and Coverdale – and I’m loving it! So British, such an easy Python-esque manner; placing him on a musical pedestal, we sometimes forget he could also speak, and run and jump, and live and love.

IAN PAICE (drums): The other veteran Purpler along with Lord and Blackmore. Paicey is given short shrift in this video, as there are no camera angles on him. Few drummers can pull off his passages with such a fluidity that belies their speed and complexity. Yet we see him only peripherally. Blame the same bad director/producer who placed a camera between Ritchie and his audience, just asking to be demolished… 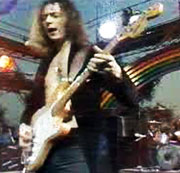 RITCHIE BLACKMORE (guitar): The wizard, the white-Stratted man in black. His guitarwork unparalleled by anyone on this mortal plane; he wields it like so much nothing, effortlessly careening riffs and licks to the cosmos. The jaded artiste simultaneously crashing up against the stratospheric egotist, as he glares at his stage-left giant broadcast camera, walking forward out of its focus to deliver Mistreated, angling his back contemptuously to it as much as possible. This puts him forward of all the foldback wedges as well, which tells you how majestically pissed he is. Woe to the cameraman foolhardy enough to come between Ritchie and his audience. Suffer the fate of those who do not heed… 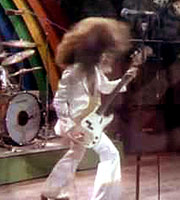 GLENN HUGHES (bass): There are things in this world that “affect” you, that drive your aspirations as a young spawn of Beelzebub. One of them, of course, was The Maestro; another that eats into your bloodstream is the iconic visage of bassist Glenn Hughes at The California Jam – the epitome of the “rock star”: bare-chested and white-suited like an angel of madness, banshee ululations, bellbottoms four feet wide, stack heels as high as Ritchie Blackmore’s ego, and hair down to tomorrow. That hair, that hair; parted like a caveman, waterfalling over his face like the most celebrated pithecanthropus in his village. After seeing this thing of horrendous beauty, I would never be the same…

The music crashes into the crowd; in this bygone era of “realism” it is absorbed with nary a whimper; crowd are not “tweaked” to sound louder than they really are; there are no pandering crowd angles or closeups to detract from the stunning artistry onstage. Crowd is there not to scream blindly like gits, but to experience music, rock, insurrection, long hair, drugs and bellbottoms; because there was no other way to experience this kind of event.

After the opening ramjet of Burn, Purple would scale the spectrum of musicality in their short set; not just a rock band, stormbringing and space trucking: driving intensity, pianissimos, crescendos, fortissimos, ritenutos, classical interludes, jovial interplay, blues, and self-indulgent jamming. Unlike many other bands of this era, Purple’s jams do not extend interminably, and each member makes their flights of fancy worth listening to. And for hell’s sake, this last of the old world rock festivals – was called the California Jam.

The outro to Space Truckin’ (which devolves to just an arbitrary urgent rhythm vamped by Paice, Lord and Hughes) – and Blackmore unslings his Stratocaster and starts throwing it, bashing it, scraping it on the edge of the eight-foot high stage – it falls off. He grabs another Strat and suddenly – SMASH! – directly into the camera to his left. We see this from the camera’s point of view. We would discover later it was because that cameraman would not stay out of Ritchie’s way. As petulant as that sounds, rewatching the video proves Ritchie right. This is not a Steadicam, or a sleek shoulder camera – that cameraman is all up in Ritchie’s face with an old Camera The Hutt. Those not familiar with being onstage might argue, Why didn’t he just move over a little? It’s not about petulance, it’s about where you can hear yourself and the music properly, and as a performer, you should not be made to look obtuse by a technician blocking you from the audience’s vision.

In a desperate attempt to stop the wanton destruction, the cameraman moves forward onto Blackmore, who backs up after trying to skewer the lens with the guitar’s neck. We can see the point Blackmore thinks better of finishing the job, and goes to work on the guitar instead. He hurls the guitar heavily out to the frothing crowd, who do battle for it. (Some longhair from the 70s has that artifact even as we speak.) 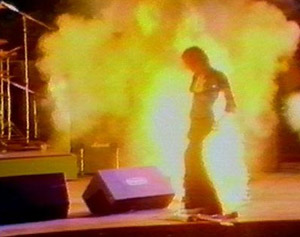 Warning came, no one cared / Earth was shakin, we stood and stared / When it came no one was spared / Still I hear— Burn!

He grabs yet another – destroys it. Meanwhile, roadies have loaded his Marshall speaker cabs with explosives. Now I can’t tell you exactly what they were using because this was long before I started using stage explosives in controlled situations. This situation was way out of control… As Blackmore scrapes his foot along the third destroyed Strat’s neck, his speaker stack is lit on fire. And EXPLODES! Literally.We see fire extinguishers immediately try to quell the flames but it’s so intense that Blackmore has to leap forward to escape the heat. While the band members continue to vamp, the giant fire is brought under control. Smoke. Not on the water – on the stage, goddamit! So choking that Hughes strides to the front to escape it. Coverdale is nowhere to be seen, as Lord punches his Moog to take up the frequency gap left void by the lack of guitar, as Blackmore systematically drags his speaker cabs and amps to the front of the stage and tosses them over. In the final bangs, Coverdale would reappear and whoop joyously.

The gag would cost Purple management $10,000 in damages. At the time, the vicious and primal display was unsafe and deadly and legally debilitating, but in retrospect, as part and parcel of Deep Purple at The California Jam… immortal.

This title/ presentation/ feature has a checkered history, being released, bootlegged, re-edited and re-released time and again. Look for this title online and the newer video and DVD releases have subsumed what this concert was known as. I grew up knowing it, loving it, ingesting it, simply as THE CALIFORNIA JAM.

To my raving metal clique and I, it was a Deep Purple performance, nothing more; we never knew that other bands performed at the Jam until years later.

CALIFORNIA JAM 74:
Burn
Might Just Take Your Life
Lay Down Stay Down
Mistreated
Smoke On The Water
Lazy (excerpt)
You Fool No One
The Mule (excerpt)
Space Truckin’