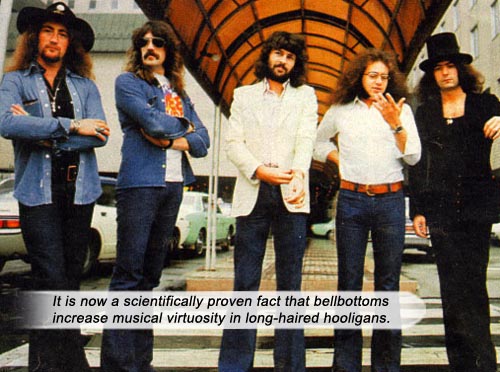 In Rock Gods We Trust.

“Classic Albums,” produced by Isis Productions and Eagle Vision, is an excellent series to begin with, as the artists who forged the albums that changed the world dissect their masterworks in track-by-track personal commentaries. So when an artist is featured that you cut your teeth on; whose massive hits you’ve performed onstage, vicariously thriving on their residual hippie-juice, you can bet it’s a heady journey. Such an artist for me was Deep Purple, and as this excellent documentary unfolded, I knelt and sacrificed the fatted calf…

They were not just a bunch of friends who formed a band (like The Beatles or The Kinks or Def Leppard). When Deep Purple’s “Mark II” lineup coalesced in 1969, they were each specialist gunslinger musicians who could have walked into any band in the world with their searing chops. Ritchie Blackmore, Ian Gillan, Roger Glover, Jon Lord, Ian Paice. For a few supernova years, this purest and best lineup, driven by electro-classical guitar and toothed organ, would output some of the most blistering hard rock albums the world has ever known, among them, Machine Head. (Not only did my cover band “Purple” perform 6 of the 7 tracks from that album, Deep Purple themselves retain the bulk of that album as staples in their current live sets.)The albums that lead up to Machine Head are quickly reviewed for context: the monumental Concerto For Group And Orchestra (1969), the fire-breathing In Rock (1970) and the groovy Fireball (1971).

Then into Machine Head‘s opener, the greatest driving song of all time, the indomitable Highway Star. (Gillan: “…written on a bus going down to Portsmouth… and Ritchie was dickin’ around on his banjo and someone said, ‘How do you write a song then?’ and he said, ‘Like this’ and just went, ‘dun-dun-dun-dun-dun-dun’ while looking out the window. So I started singing, and uh, we did the song in the show that night.”) I still maintain that you can listen closely to any one of the instruments on Highway Star and find that each is a virtuoso journey unto itself. If a drummer, bassist, vocalist, guitarist or organist can play any of those parts – hire them immediately. It means they can play. Really fucking play.

We are made privy to the mindset behind Blackmore’s riff on Pictures Of Home (Lord: “I think he picked it up from some Eastern European short wave radio – probably the one built into his hat!”); with Ritchie chiming in that he heard it on Bulgarian radio, and of how “the band worried about Ian singing about ‘eagles and snow’… Lord shows us how parts of his solo were constructed, sitting at his Hammond B3.

There is much live vintage footage of the band performing these songs. Care has been taken to show gigs with only the Mark II lineup onstage, performing the songs from this album. And all the members have made themselves available for commentary – even the reclusive Blackmore! What a coup! As he sits there condescendingly looking towards the ceiling for most of his replies, an acoustic in his lap to intermittently toodle at whim; doing his Tortured Genius, yet giving his time, which does serve posterity.

“It was the sound of Pan, prancing over your brain.”
— Bruce Dickinson, describing Ritchie Blackmore’s guitarwork.

And at last, one million arrogant schoolboys can see how Smoke On The Water is really played – by the man who invented it. (Blackmore: “I remember Pete Townshend saying to me, ‘You’ve got to keep things simple and take the audience with you.’ That was very profound.”) There is the mythic war story behind Smoke, of how “some stupid with a flare gun” at their Montreux venue “burned the place to the ground” while Frank Zappa played; of how they “ended up at the Grand Hotel” and recorded this album…

The only gripe I have with this excellent doc is that they very blatantly omit one of the mightiest songs on the album – Lazy. Everywhere you read reviews of this DVD, you will see the same complaint. Lazy in name, lazy in nature?! And how’s this for an insult to us diehard fans? They make comments on When a Blind Man Cries – no doubt a great song, but it was the B-side to Never Before (which was created specifically to stop the record company whining over a “single”). You can talk about a B-side – and neglect Lazy? (They also omit Maybe I’m a Leo.)

Aah, the gatefold sleeve! Who can forget lying on the floor after putting an album on the turntable, hearing the needle kiss that lead-in groove, and then poring over every inch of the magic gatefold, inside and out, while music washed over you and into your soul? As John Kay wrote, “I like to dream, yeah! Yes, yes, right between the sound machine…”

It is awe-inspiring to see Jon Lord sitting at his beloved “The Beast” – the vaunted Hammond B3 organ that would separate Purple musically from their peers, most notably, the other two-thirds of the seminal triad that would make up The Big Three: Black Sabbath and Led Zeppelin. All three bands would utilize keyboards in their songs, but not like this. Not like this!