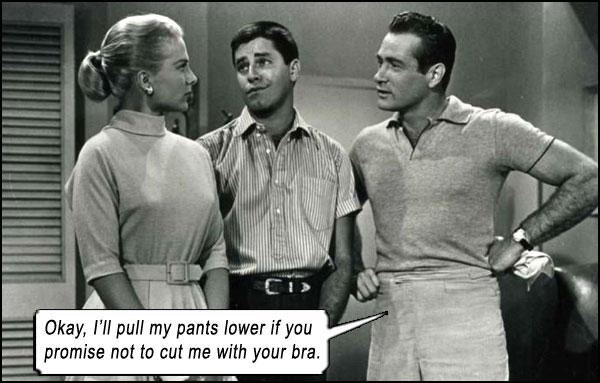 In his first movie without Dean Martin, THE DELICATE DELINQUENT, Jerry Lewis is a youth mistaken for a gang member, taken under the wing of a mentor cop… Time for the public to find out whether The Kid was all he was cracked up to be, or merely one half of a defunct team that needed the chemistry of both teammates to work.

Final verdict: a bit of both.

Before Jerry found his auteur feet (with THE BELLBOY, THE LADIES MAN, THE NUTTY PROFESSOR), this movie was like a “soft landing” for him, as he is still very much part of a duo, only his straight man is more of a square. Matter of fact, the mentor cop character was written for Dean Martin, and DELICATE DELINQUENT was meant to be the next Martin and Lewis picture, but Dean was livid about being asked to don a cop’s uniform! And thus, when Jerry went ahead and completed this movie – with Darren McGavin in the cop role – the split with Dean was final.

Written and directed by Don McGuire (co-writer ARTISTS AND MODELS), the story is premised on a misunderstanding that doesn’t make any sense, even within its own universe. Beat policeman Mike Damon (McGavin) is looking to reform one of the many street kids in a local gang, and pulls Sidney Pythias from a lineup (Jerry, 30 years old, playing 17). But Pythias is not a delinquent – he’s a janitor, and only acquainted with gang members (led by Robert Ivers) because there are no other “friends” to be had in this neighborhood. How he landed in the police lineup is conveyed in an opening sequence which is powerful yet stupid: When two gangs face off in an alley, klutzy Pythias bursts through a doorway spilling garbage, making them scatter; police surround them, one of them drops his knife, Pythias picks it up; busted with a weapon with nowhere to run, he is herded into the back of a police truck with the gang. (It doesn’t say much for the intelligence of police if they can’t discern weeping pansy Pythias is not part of this gang.)

The sergeant knows that by asking every lineup to drop trou, the department will discover that he is in the closet one of these days… but today is not that day.

When Jerry bursts through the doorway, he looks like he did in the early days of Martin and Lewis; the black and white filmstock adds to that illusion, though he’s also lost weight since his last film (HOLLYWOOD OR BUST), and he’s playing more energetic again. DELINQUENT was shot from September to October 1956, which means Jerry threw himself into the project as soon as he parted ways with Dean in June of that year (while PARDNERS was just being released and before the last Martin and Lewis film, HOLLYWOOD OR BUST, was released in December ’56!). It makes sense, as the movie was already slated for production with Dean, so the cogs were already turning and Jerry was swept along in the process. (What was surprising is that – they – just – kept – coming. In quick succession, Jerry would turn out comedy after comedy – THE SAD SACK, ROCK-A-BYE BABY, THE GEISHA BOY – with the same regularity as the Martin and Lewis catalogue, until he started writing and directing them as well, and the rest, as they say in France…)

According to the doc, JERRY LEWIS: THE LAST AMERICAN CLOWN, after Jerry split with Dean, his waning confidence was restored when he was asked to take the stage as a favor to Judy Garland, down with pneumonia. His impromptu solo killing is corroborated in Shaun Levy’s The King Of Comedy: The Life And Art Of Jerry Lewis. After that, there was no stopping the Kid.

Still, I would have loved seeing Dean in this film. Damon and Pythias have face-offs that are very emotional; the cop role empathetic, the janitor role pathos. It would have propelled Dean and Jerry into territory they’d never explored before; a great maturation point in their filmic careers. If only….

Thus, with Damon choosing Pythias (yes, the reference to the Greek legend is cited), no REAL delinquent is getting a chance at redemption. (I mean, look up “delinquent” – lawless, criminal, wrongdoer, malefactor – Pythias is NONE of these!) And though it’s written as if Pythias is “redeemed” from the street, there is actually NO REDEEMING ARC. Pythias goes from being a good kid – to being an inept cop. Inept because he is shown klutzing his way through the police academy (because, of course – comedy), and then – surprisingly – passing to the final stage, which is an armed ride-along with Damon, where he proceeds to get bitchbeaten by thugs in a fistfight, whereupon he loses his gun to a thug, who shoots someone with it. What does this say about the judgment of the police to let someone who only barely passes their tests onto the street?

The shooting incident leads to an official inquiry, where Pythias is in danger of being washed out of police academy, and Damon is shown lobbying for Pythias (in what could be considered the closest metaphor for the trust between the Greek legends of the same name). But what does this say about the ethics of the police force? That because you’ve staked your name on reforming a “delinquent,” even if he fails, you should ram him through to save face?

I guess Damon is a Republican.

The movie opens very hip, very “beat”; the jazz of bongos over trumpets, as street thugs face off in a wet alley; appealing to the rebel kids of that generation. Then it ends on an embarrassing sour squark as the message hits loud and unclear: Join The Police Force – Any Idiot Can.

Damon’s love interest is perfect-featured, smokin’ blond Martha (Martha Hyer), an out-of-touch council worker with a severe pointy bra, sent to reform kids with regulations and discipline, instead of empathizing with them or actually providing jobs or youth resources. At least we missed out on a coupla unnecessary Dino songs that he would have no doubt crooned at her.

Funny to see Frank Gorshin as a street “kid” harassing Martha; all we see is the 30-year-old Riddler who would harass Batman. A dame with a bra the size of an elephant (though still very pointy) walks by him, and he sniggers something to a friend, and I swear that times have changed so much, I don’t even know what to make of his comment – whether it’s sexist, funny, or dirty (or all three)! 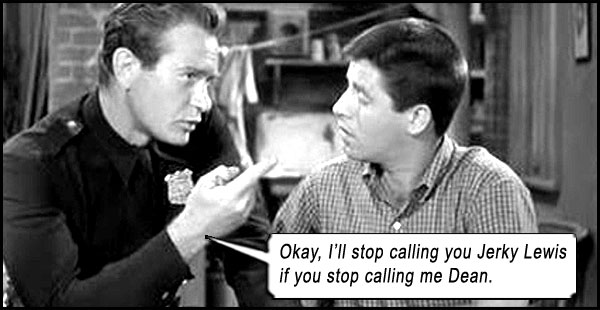 Surprisingly, Jerry performs the single song in the movie and, for the first time onscreen, uses his natural voice! By Myself is NOT related to the 1980 Peter Criss song of the same name, but done for the exact same reasons! (Criss did it on his first solo album apart from KISS, Jerry does it in his first solo film apart from the guy who looked like Paul Stanley.) He’s not being funny or cute, but introspective. His voice deep, tragic and soulful, he finds his way closer to the Chaplin tragicomedies that inspired him. And when speaking during serious sequences, we’ve never heard Jerry’s voice this unaffected before. His love interest is a young female neighbor (Mary Webster), whom he doesn’t want to ask on a date until he’s a success: “I’m a nowhere, and that’s the worst kind of something there is.” Pretty heavy for a Jerry Lewis movie. Her tiny pointy bra agrees.

Jerry would be the producer on DELICATE DELINQUENT (because Hal Wallis, his longtime Martin and Lewis producer had had enough of Jerry’s insubordination); he would star in it, and be an uncredited screenwriter. As with all Jerry’s movies, there are gag sequences that have nothing to do with the throughline, yet add an overall Jerry Lewis-ness to the proceedings: the theremin gag, the sergeant who can’t pronounce Pythias (a hypocritical ass who expects applicants to remember long series of numbers while he can’t even pronounce their name!), the professor making a spaceship for frogs, the Murphy bed, the Japanese wrestler, etc.

Wearing so many hats, one could realistically place the success or failure of THE DELICATE DELINQUENT squarely on Jerry’s shoulders. It cost $487,000 to make, and it grossed $6 million. The Kid was flying high.

imdb
Word Count: 1,430      No. 1,414
JERRY LEWIS MOVIES
The Delicate Delinquent
The Sad Sack
Rock-A-Bye Baby
The Geisha Boy
Don’t Give Up The Ship
Visit To A Small Planet
The Bellboy
Cinderfella
The Ladies Man
The Errand Boy
It’s Only Money
The Nutty Professor
Who’s Minding The Store?
The Patsy
The Disorderly Orderly
The Family Jewels
Boeing Boeing
Three On A Couch
Way… Way Out
The Big Mouth
Don’t Raise The Bridge, Lower The Water
Hook, Lone and Sinker
Which Way To The Front?
The Day The Clown Cried
Hardly Working
Slapstick Of Another Kind
The King Of Comedy
Cracking Up
To Catch A Cop
How Did You Get In? We Didn’t See You Leave
Fight For Life
Cookie
Mr. Saturday Night
Arizona Dream
Funny Bones
Max Rose
The Trust