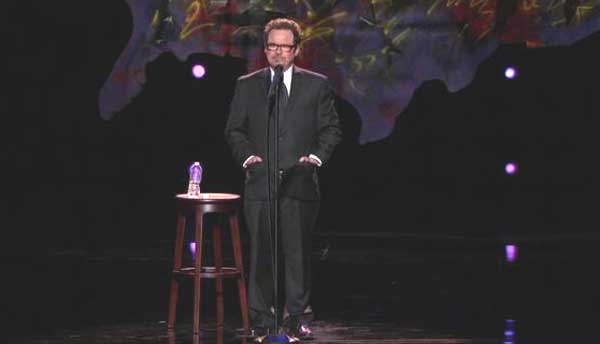 And now for something completely ignorant…

Dennis Miller is smart. I used to record THE DENNIS MILLER SHOW on VHS (that’s an olden-days DVR, chillun) and marvel at the way his mind spiraled headlong into esoteric references to rail against ignorance.

In his 2014 standup special, AMERICA 180 DEGRESS (a one hour routine, filmed in Irvine), Miller is now using his enormous vocabulary and esoteric spiraling to rail against everything democratic, using his intelligence to – ironically – rail against intelligence.And I don’t get it.

What I don’t get is how an obviously smart person like Miller could have been bought off by corporate shills so completely. If he was not bought off, then I ponder on how insular and lazy he had to become to drink so deeply of the Kool Aid provided by the rich crowd he waddles with, and not bother educating himself on what is truly politically happening in America. If you’re a Republican, this standup show is laugh-a-minute. If you have even an inkling of how the country, the economy, or the climate actually works, then you’ll watch with your jaw open, as Dennis Miller pisses his pants trying to denigrate intelligence and democrats with his vaunted obscure references.

If there were one titter to be found in this feature that is not predicated on hating the Obama administration, it would be rate-able; as it is, unless you go into this show with Obama Derangement Syndrome, you’ll see it for the slanted agitprop it is, which makes it unrate-able. It is perpetuating ignorance for the ignorant wrong-wing masses to lap up. That being the case, there is literally NO edifying humor in this supposed comedy show.

Now I’ve known for awhile that Miller has been playing for the arrogant uneducated anti-science team, having seen him spout his political inanities as a regular guest on the Fox News network. (To think he was once the Weekend Update host on Saturday Night Live.) But I figured he might redeem himself in his own standup special, where he would have the freedom to extemporize on political topics surely too nuanced for his Fox demographic. Sadly, not the case; what he says bluntly on Fox News is, in fact, what this once-great thinker actually believes now… 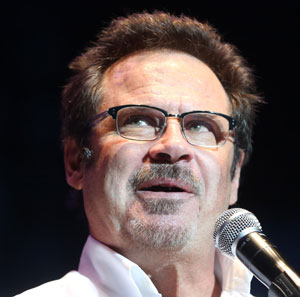 Dennis Miller: Too smart for his own stupid.

In his first five minutes, Miller launches into a tirade about climate change. Even as he thinks he’s needling climate scientists, asking them to explain how “global warming makes the weather colder” (I got a suggestion, Dennis: Google it. I’m sure you’re not that anti-technology that you don’t have this worldwide search engine), and then mocking them by explaining, “One day it’s hot, the next day it’s cold – that’s called “weather”!” he doesn’t even realize he has shot himself in the foot. Because the first thing environmental scientists explain to dullards who bring up “weather” is that vagaries in day-to-day heat or cold has nothing to do with the macro phenomenon we call Climate Change. That is, in fact, simply called weather. And – they will tell you – if you’re going to look at daily weather to use as defense for disbelieving climate change, instead of weather patterns over eons, you’re not even looking at the correct data.

In another bit, Miller accuses President Obama of trying to “slip the burden of calling it Obamacare, and now calling it the Affordable Heathcare Act” — Sigh, where do we start educating this once-bright mind that slipped and fell and hit its head on Republican? It was  always called the Affordable Health Care Act, you dummy! It was the mean-spirited Republicans who believed the AHA would fail as a social program (and did everything to try to make it fail) and thought to “burden” Obama with the blame by calling it “Obamacare.” Turns out that American society embraced the AHA and people gladly called it Obamacare, because they wanted to credit the man who saved their lives. Even Obama embraced that Republican “insult” because, he says, he DOES care.

Smart Dennis then goes on to hit ALL the Republican talking points, chastising governor Jerry Brown, a snide reference to Michael Bloomberg, jabs at Gore’s climatology, Joe Biden, John Kerry, Nancy Pelosi, and of course, President Obama. (An indication of how low and unoriginal he has sunk – he resorts to critiquing Obama over using a teleprompter; firstly, he’s criticizing Obama for something that every president uses, as if Obama is the only one who uses it; secondly, it’s already been done to death, Dennis – by that network that pays you to be a pearl amongst swine. Not only that – MILLER HIMSELF is using a teleprompter! He qualifies that he is using a teleprompter because he’s only a comedian – hey, Chris Rock doesn’t use one! Neither does Ricky Gervais, Louis CK, Joe Rogan, George Carlin, Richard Pryor, Dave Chappelle… get off your low horse, Dennis.)

The tragedy in this routine is that it’s not like the old days, where Miller would call out any politicians’ stupidity, no matter their party; now, he is actually disparaging physical attributes of these democratic politicians like a shrewish girlfriend. He also hits Solyndra, immigrant amnesty, MSNBC, homosexuality, Christianity, Benghazi (fer cryin’ out loud!) – and why the hell is he defending DUCK DYNASTY and Creationists?!

I’ve read his books, I’ve revered his shows, I’ve envied his mind. And after all that time as a smart person, who could foresee that Dennis Miller would do a complete 180?