Beware of goddesses offering to pay your train fare. 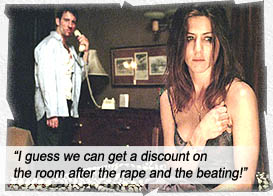 A caveat unheeded, when the goddess in question is Jennifer Aniston. I am, after all, only a man. And, like every other full-blooded, able-membered man on earth, whenever I look at Jennifer Aniston, I can only think of One Thing: Brad Pitt. And how I’d like to take him to the cleaners for putting his hands on My Woman.

It is this exact mindset which the makers of DERAILED are aiming for – and the trapdoor swings wide, ensnaring yet another testosterone-laden mark. They win. We lose – with visions of perfect-bosomed, green-eyed heaven salving the pain of defeat.

Charles Schine (Clive Owen) is the testes-bearer unable to resist the animal attraction of Lucinda (bottle-brunette Aniston in prim office attire, with ascot and boots – somebody help me!), when she pays his fare on the train one day, he having forgotten his wallet. Sensing an opportunity for a foot in her door, he chats with her on the pretense of gratitude – but of course, we men in the audience know his primo directive is spanky-spanky.

Enviably enough, Charles already sports a deliciously spankable wife (the mouth-watering Melissa George) and a diabetic daughter – ah, the magic word for Flaccidity – “daughter”; no wonder his eye is roving… With all his earnings tilted toward a dialysis machine for his daughter, with a double-mortgage on the house, and with bleak future prospects at his job, his life is quickly spiraling into the Unfulfilled bin. He sees the tryst with this goddess as a reinstatement of manhood. 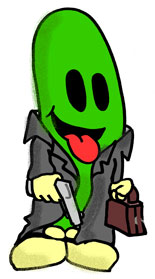 Poffy Owen –
hard as a cucumber!

After a series of lunchtime rendezvouses with Lucinda, where she opens up to him quite promisingly (revealing her marital situation is also anything but satisfying), one rainy night it seems like spanky-spanky is imminent and Charles finds himself checking them both into a low-class hotel room.Seconds before they clambake, in barges yet another cause for Flaccidity – is there no end to our performance anxiety? – a mugger!, who beats Charles to a barely-conscious pulp and rapes Our Lady Of Cutie-Pie.

Both Lucinda and Charles dare not alert the police, for fear of revealing their adulterous liaison and his blue balls, so go their separate ways.

What might have remained a single terrifying episode explodes out of proportion when the mugger, LaRoche (a smarmy Vincent Cassel), systematically starts extorting Charles in return for keeping his adultery secret. Charles’s wife, friends and job are all adversely affected by his clandestine dealings with LaRoche, and it is all Charles can do to keep one step ahead of the Nosey Movie Policeman (Giancarlo Esposito, playing the same role he did in THE USUAL SUSPECTS), while his last savings are eventually squeezed from him.

“Performance anxiety” is now the key phrase, as Charles’s feelings of impotence regarding his rutted life were what enticed him into Lucinda’s embrace in the first place – now, he is made truly impotent by LaRoche, stultified and helpless to save either Lucinda, his wife, daughter, or himself.

Nowhere to go but up. Which explains the casting choice of Clive Owen as Charles. At first, seeming so misplaced in beige Everyman idiom, with no discernible personality traits, except Panty Hound (an inherent disease of the male gender), Owen seemed like he should have been Michael Douglas or Adrien Brody. But when Charles is required to go Hard Guy and salvage his life and cash, we see the Clive Owen we know (from CROUPIER, I’LL SLEEP WHEN I’M DEAD, SIN CITY), and the leap in personality is entirely plausible. Because he’s Clive Owen.

And the word “flaccid” has no further meaning in this film…

DERAILED is a product of its times and is rife with “twists,” though is woven artfully enough so that even if you see the groaners coming, they hit note-perfect anyway, appearing logically, with no “cheating” on the film-makers’ part. Though, with so many movies in recent years harboring these sometimes-irritating “twists” (CRIMINAL, CONFIDENCE, MEMENTO, SECRET WINDOW, OCEAN’S ELEVEN, the list continues…), M. Night Shyamalan will have to go a long way to keep us jumping to conclusions in his next outing.

One small quibble with the conclusion of the film involves Our Honey Bunny, Jennifer. Avoiding spoilers, suffice to say: she is absolved gratuitously, for no reason other than because the waking world cannot bear to see such Olympian beauty sullied as a purely evil character. But this resolution stinks to Olympus. Or, should we say, to “Hollywood”? It is the same double standard which would grant a hot woman “community service” for statutory rape of a minor and crucify a man for the same offense.

No matter her taints and foibles, I look at Jennifer Aniston and I can only think of One Thing: and seriously, folks – it ain’t Brad Pitt.