From all reports, I knew THE DESCENT was going to be “affecting.” What I didn’t expect was to end up curled in a corner in a fetal position, gently rocking back and forth, dribbling slightly, and calling my dolly’s name in the darkness. 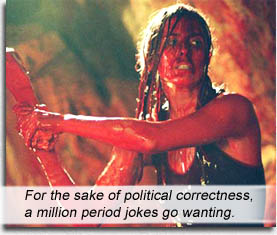 Six women into extreme sports go spelunking. After an uneventful night in a log cabin in the Appalachians (where the senseless chick-yammering reaches a critical mass), they descend into an unexplored subterranean labyrinth, where a cave-in traps them – and they find they are not alone.

Writer-director Neil Marshall’s THE DESCENT is distressing, disturbing and uncomfortable in all the wrong ways that make it so right. He drags us into the pitch black of our own insecurities and primal fears. Characterization is almost overshadowed by the fact that the ladies must necessarily meet the proto-humans – the Crawlers – in the caverns, but if you pay close attention, there is a rewarding subplot between the two main damsels who, while in distress, do not turn into whiny bitches and stop just short of Ripleys. Their interaction carries all the way to the surprising ending.

Marshall uses many horror conventions to create his tension, anxiety, jump-scares and mindfucks, but instead of becoming cliché, he succeeds with simplicity, and a well-directed cast of unknowns.

High marks to Marshall and cinematographer Sam McCurdy for studiously using minimal light sources, mainly flashlights and flares where possible. In supposedly pitch dark caves, nothing is more annoying than seeing everyone clearly in reflected light sources or backlighting that couldn’t possibly exist in the real world.

The opening act is distressing for the wrong reasons – sure, we have to be introduced to the six girls or we’ll never care for them when the flesh starts flying – but do we have to put up with all this yammering? Chicks yammering vacuously is almost as painful as being disemboweled by proto-humans in an underground cave. If you can make it past this first act, you will be rewarded during The Descent, the claustrophobic suspense never letting up till the last frame – and even then, it will leave you nauseous. In a good way.

The opening scene is a shocker, setting up main girlie, Sarah (Shauna Macdonald) with a tragedy that aids her motivation when the going gets dark and bloody.

A year after Sarah’s tragedy, she gets back on the horse again by accepting an invite to an extreme caving adventure with her fem posse, led by Juno (Natalie Mendoza). Now maybe I watch too much porn, but when I see six hot chicks in a log cabin having a slumber party, shouldn’t the wocka-chicka start pretty soon? One of them wears pajamas that they all poke fun at – payoff: the pajamas are ripped off and massive suckling ensues, right?; one of them walks into the shower – payoff: they’re ALL sharing the shower, right?; one of them wakes up in the middle of the night and looks over the other sleeping fleshpots – payoff: they’re all in the same bed, right? And where the hell was the pillowfight-in-panties scene?

Marshall got the setups right, but missed the payoffs. Maybe take some pointers from Randy Spears?

Then the caving starts and the movie gets serious about its horror status. When they crawl through claustrophic rock passages, where no one can turn around or go backwards, we start to feel the terrifying, smothering weight of the millions of tons of stone above them. And then Sarah, the last in line – gets stuck.

This is without a doubt the best moment in the movie and transitions us from vacuous yammering to primal fear. And our chests clench, as we ask out loud, just to hear our own reassuring voices in the cloying darkness: “Why do people DO these things?”

While we didn’t get our literal lesbo love-fest, we do appreciate the rest of the movie giving us the metaphor of chicks squeezing their slimed bodies through dark orifices. (And when women grunt in exertion – whether their lives depend on it or not – I”m sure I”m not the only one constantly misinterpreting those grunts.)We have the bone-through-the-shin gag – oh-hooooe! Pain is SUCH a rush!; we have pickaxes through the neck; we have a boneyard cathedral and a stagnant blood lake, and when the girls think they’ve found a way out, the surprising ending will turn your stomach.

No accident Marshall calls it THE DESCENT, as in ‘descent into madness.’

Now where’s my dolly, Pliffy? Pliffy, where are you?… you didn’t go down that bad cave, did you?… Pliffy?…